Share All sharing options for: Assume the Position 2010: Wide Receiver

You know the drill: Every Thursday (or sometimes Friday, apparently) from now until mid-August, BHGP breaks down the depth chart, position by position, from most certain to least certain. 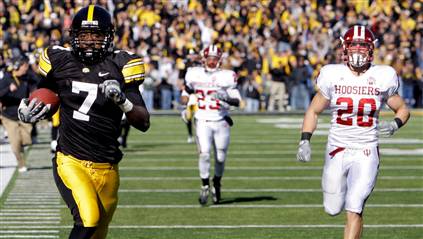 There aren't too many question marks at the top of the wide receiver depth chart; as long as McNutt stays healthy and DJK stays with the program, they'll be starting.  The question is who fills in the remainder of the chart, and how many receivers are de facto starters.  With more depth and experience than virtually every set of Iowa receivers to ever take the field, and a rumored expansion of the offense this spring (OMG FOUR WIDE BABY), we may see more receivers than ever.

What more can be said at this point about the mercurial DJK?  When he's playing, he's the best skill position player on the squad, and the numbers bear it out: 127 career catches and 1,871 career receiving yards (only 30 catches and 400 yards from breaking the all-time Iowa records in both categories), three-time team receiving leader (one of only three players to ever lead Iowa in receiving three times), and more than 1,000 career kickoff returns yards to boot.  Of course, there is the modifier: Koulianos keeps using social media to write checks his body can't cash, repeatedly drawing the ire of the coaching staff and effectively being gagged in public (although we think the "I can't talk to anyone" thing at the spring game might have been a bit of a put-on).  We, for one, love DJK; he's the only player openly discussing national championships, and he's the best quote machine on the team (last year's shiv to Pat Harty's side was particularly pleasing), and even with all the bombast, he's backed up every word on the field.  He's fun to watch.  He's fun to listen to.  Let him play.  Let him play.

This time last year, we thought McNutt's place at the top of the depth chart was merely a motivational tactic; there was little to indicate that a recently converted backup quarterback could or should be usurping the team's most prominent returning receiver.  And yet he stayed there through August, and we soon saw why: McNutt made a big, fast target who was as sure a pass catcher as we've seen.  In a program where the big, fast guys rarely have the hands to match their size or speed (paging Bashir Yamini), it was enough to make us drool.

Eighteen months ago, McNutt was the next big thing at quarterback.  He received 3 stars from Scout and Rivals, with all the usual suspects making offers (Wisconsin, Minnesota, Mizzou, Nebraska, Kansas, KSU, etc.)  He was intriguing, to be sure, but he was raw: He struggled mightily in his few public appearances, still fumbling with proper footwork and arm angle despite having completed two seasons in the program.  The staff was confident enough in Vandenberg to get one of its best athletes on the field, though, and the switch was quickly made.  McNutt started five games last year, caught the most significant pass since Warren Holloway to keep the dream alive in East Lansing, and firmly established himself as a starter for 2010.  Where he goes from here is anyone's guess.

Dwight.  Kasper.  Hinkel.  Brodell.  Stross.  Dodge...OK, maybe not Dodge.  But it wouldn't be a proper Iowa football season without a white wideout in the mix.  As the esteemable Brian Cook once said:

Every four years a secret lab somewhere in a Des Moines-area cornfield spits out a mysterious Caucasian child who eats nothing but lightning bolts and runs like a cheetah over brief distances. When the child turns 17 he signs a letter of intent with Iowa and becomes their next Inexplicably Great White Wide Reciever (IGWWR).

This year it's Sandeman, the injury-plagued punt returner, slot receiver, and troubador.  Or, should we say, it's his until he can't do it any longer; he missed most of August practice last season with a hamstring injury, then suffered a concussion on a brutal hit late in the Michigan State game and missed two more contests.  When he played, he was effective: Sandeman finished second in the Big Ten in average punt return yardage and added 14 catches for 136 yards and a touchdown for good measure.  This year, he finally emerges from Stross' shadow.  Expect good things as Sandeman gets into 3WR sets and fills in when DJK inevitably puts his foot in his mouth.

Four catches.  Fifty-five yards.  One touchdown.  One kickoff return.  Was it worth the redshirt?  Probably not, but Davis came to Iowa City ready to play.  Eric Campbell, who coached Braylon Edwards, Mario Manningham, and the multitude of other terrifying Michigan wideouts under Lloyd Carr, has said that Davis was the most gifted incoming receiver he's seen.  Good sign from a good source.  Might not count for a ton this year, but with DJK and Sandeman on their way out, there will be room on the chart in 2011.

The Veep looked to be on his way toward becoming a true contributor last year, right up until his ACL exploded in the first half of the Michigan game, and that was that.  Chaney's small but extremely fast, and there were strong indications from the staff that he had worked through his motivational issues and was ready, willing, and able to play his typical role as kick returner, slot receiver, and quark on the exotics.  Unfortunately for Chaney, and for us, KOK exotics don't get much crazier than an end around.  Still, barring a setback in getting back to game speed or another injury, expect a return to form.

Cotton was the third big in-state skill position recruit to come to Iowa in 2009, and the only one to take a redshirt.  His dad played for Hayden back in the day, and his loser younger brother just committed to Iowa State, so Jordan has the pedigree.  He played halfback in high school, though, and may need some time to perfect the fine art of route running.  Once he has the position down, the rest should fall into place.  Another one playing simply as a prelude to next year.