Share All sharing options for: Assume the Position 2010: Linebacker 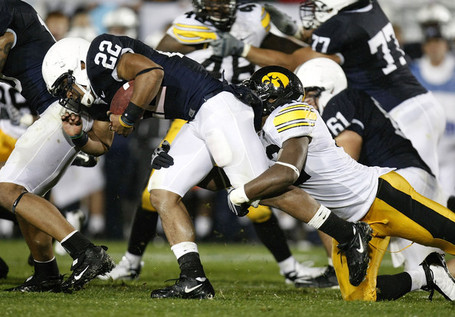 For ten years, Iowa has built its disciplined, stifling, bland as hell defense on the linebackers.  Sure, having a defensive tackle or two that can shed a block and plug holes inside is nice.  But if you're going to run 4-3 cover 2 for 95% of the plays in a given game, there's no substitute for a versatile linebacker who can flow to the run and cover a slot receiver over the middle.  Whether it be Greenway and Hodge, Klinkenborg and Humpal, Edds and Angerer, Iowa has always found those guys.  With two holes opening due to the graduation of that last dynamic duo, the coaching staff thinks it's found them again.

To be completely honest, Jeremiha Hunter is the only sure thing at linebacker in 2010.  Sure, there isn't much of a battle for the other two spots (at least if the coaches are to be believed), but the only player with any experience to speak of at the position where he will line up is Hunter, the two-year incumbent on the weakside.  He's been such a constant there, in both presence and production, that it's easy to forget he almost never got a chance.  Entering 2008, Hunter was positioned slightly behind Jeff Tarpinian for a starting spot.  But then Tarpinian went down with a hamstring injury and missed September; he never caught up, as Hunter became Mr. Consistency.  Hunter is the classic gang tackler, racking up 12 tackles in four different games over the past two seasons but never recording more than 4 solo stops in a single game.  He has just 8.5 tackles for loss among his 179 career stops, and has yet to record a sack.  It's not for lack of ability.  Rather, Hunter has proven himself the consummate Iowa linebacker: Solid in coverage (2 interceptions and 6 breakups in the past 2 years), solid against the run, completely devoid of any desire for the spotlight, and disciplined as hell.  It's why he held off Tarpinian for two years.  It's why he'll be the lynchpin of the linebacker corps this year, as he plays next to the tremendously athletic but occasionally out-of-position Tarpinian or a "system" MLB like Troy Johnson.  It's why he's the most likely to play on Sundays.

A weakside linebacker by trade, Tarpinian is moving to the middle and should finally get his shot in the starting lineup.  Tarp came to Iowa in 2006, fresh off winning a state title as the option quarterback at Millard North and being named Gatorade Nebraska Player of the Year.  He was initially a safety, but moved to linebacker after spending his redshirt season adding weight (mostly in hair).  As mentioned above, Tarpinian entered 2008 as the odds-on favorite on the weakside, but missed the early season with a nagging hamstring pull.  Since then, Tarpinian has been used on special teams and a rarely-used hybrid 3-4/3-3-5 formation employed mostly on passing downs against Iowa State; both of his 2009 pass breakups came against Arnaud's Clones.

As for his move to the middle, there is no denying Tarpinian's skill against the pass; the 3-4/3-3-5 thing was employed mostly because Tarp is better against the pass than any backup safety Iowa could find to play nickelback.  There are concerns, however, about Tarpinian's ability against the run, particularly his tendency to overpursue opposing backs.  Look for a heavy dose of counters and misdirection from opposing offenses until Tarpinian proves he's fixed those problems.

The Edds is dead.  Long live the Edds.  And so, after what feels like an interminable wait, it's Nielsen's time across the line from opposing tight ends.  Nielsen, a much-hyped in-state recruit when he left high school in 2007 (U.S. Army All-American, 4* Scout, 3* Rivals, 78/100 ESPN), only played one year of linebacker before coming to Iowa.  He redshirted, as expected for a player that raw, then took his place behind A.J. Edds, and there he has sat.  He's recorded 19 tackles in two years of play, primarily on special teams (like so many other Iowa backups, he only got legitimate playing time last year in the second half of the Iowa State game), so it's pretty much impossible to know what we're getting other than an athletically gifted linebacker with a big frame and three years spent at the foot of the best cover linebacker in program history.  I'll gladly take my chances with that.

Assuming the spot formerly held by Jeff Tarpinian as everyone's backup is Troy Johnson, a special teamer extrordinaire once dubbed Montresor on this very site for his lowly position on the depth chart, now a heartbeat away from having a heartbeat.  Johnson entered spring practice with a legitimate shot of winning the starting middle linebacker spot after spending the majority of 2009 as Pat Angerer's backup, but all signs point to Tarpinian holding a significant lead entering fall camp.  Still, he's a good problem to have: While not particularly athletic, Johnson is productive as hell.  He racked up 155 tackles (41 for loss) as a high school senior for one of the country's best teams, and yet went basically unrecruited by anyone of note; Iowa stole him from Air Force, Bowling Green, and NC State.  That production followed him to Iowa, where he parlayed his one collegiate start into 11 tackles, 1 sack, 1 forced fumble, 1 fumble recovery, and 1 Big Ten Defensive Player of the Week award.  Frankly, given that performance and Angerer-esque style of play (in contrast to Tarpinian's "long flowing locks of hair on fire" approach), we're more than a little surprised he's fallen this far.

Speaking of production over athleticism, Bruce Davis won the Ohio High School Player of the Year Award in 2006 despite being undersized and a step slow.  He received interest from Iowa, North Carolina, and the typical mid-major dreck like Ball State and Syracuse, and pounced on a late Iowa offer.  He's done more pouncing since then, especially on kickoff coverage, where he recovered both the squib kick that ended the 2008 Penn State game and the surprise onside kick in the 2009 Iowa State game.  He's probably best suited to stay that role, though he does enter fall practice listed as Hunter's backup on the weakside.  He should get a shot in 2011.

Petersen is a former walk-on, and he has taken that typical walk-on route to a spot on the fall depth chart: Redshirted a season, briefly flirted with playing tight end, got in some special teams and garbage time work, and finally hits the depth chart as a senior.  It's unlikely Petersen will play much; he only saw action in one game last year, and it's not as if he's pushing Nielsen for the starting spot on the strongside.  Still, it's a happy ending for a kid who has dedicated five years to the program with not so much as a tackle to show for it.

Only listed here so I can go to sleep at night knowing that not every linebacker on the team is an upperclassman.  Also because "Shane DiBona" sounds like he got sent over to fix Bunny Lebowski's cable.  Anyway, at 6'2" and 230 pounds, he's got the frame to play if necessary, which gives the Hawks an option should Linebackalypse go down.  He's on the leadership group, which helps his case.  And he's an athlete: In high school, he competed in the 55 meter dash, 4 x 200 relay, long jump, and shot put, which is the strangest combination of track & field events I have ever seen one person attempt.  Good enough for me.