Share All sharing options for: It's Not Plagiarism If You Link To It Would Like to Thank the Academy 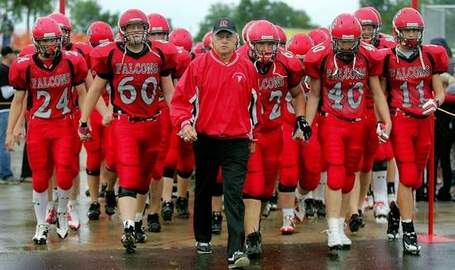 The (Falcon) Red Carpet.  The ESPY Awards are a vapid, meaningless event -- nominating Brett Favre for the CASTROL EDGE PERFORMANCE UNDER PRESSURE AWARD for his performance in a regular season game that just so happened to be on ESPN says more about The Worldwide Leader than anything not named Chris Berman's Hawaiian shirt -- but we usually make time for the Arthur Ashe Courage Award, given to dignitaries and luminaries from the sports community for their personal courage and charitable works within their community.  Past winners include Nelson Mandela, Muhammed Ali, Pat Tillman, and Jim Valvano.  Which is why we'll be tuning in tonight, ever so briefly, when ESPN honors the family of slain Aplington-Parkersburg head coach Ed Thomas with the Arthur Ashe Courage Award.  There's nothing we can say about the former coach that hasn't already been said, so we'll save the summary.  Suffice it to say, for the tornado recovery and for everything else he and his family did both before and after to help those kids, that school, and those towns, it's well deserved.

Why Don't You Cry About it, Saddlebags?  There was plenty of fluff journalism coming out of last week's pseudo-Media Day, such as the aforementioned Riley Reiff bio and this piece on Ricky Stanzi which details his work in the film room OH WAIT WHAT DID YOU SAY?

Then there is the matter of Stanzi, who, with an 18-4 record under center over the past two seasons, should be considered a proven strength, but who is approaching his last year like he has much left to prove.

In casual conversation, the 6-foot-4, 230-pounder from Mentor, Ohio, exudes confidence and a sense of command that Vandervelde and his teammates can feed on.

Ricky's spent the offseason frequenting the Sizzler, apparently, and not a moment too soon; the knock on the incumbent Iowa quarterback has always been his less-than-formidable size (well, that and the STANZIBALLS).  At 230 lbs., Stanzi is suddenly no longer the skinny kid behind center, and that film work should help with the other problem that shall not be repeated.  I, for one, welcome our new normal-sized overlord.

Residents of Ames, Hide Your Laptops.  Royce White: Former Minnesota Golden Gopher, convicted thief, and newly-minted Iowa State Cyclone, as new coach Fred Hoiberg has agreed to allow White to transfer to Ames.  For those of you who don't follow Gopher hoops, White was a consensus top 50 player out of high school in 2009, but was suspended before his first season could even begin due to an arrest for shoplifting and assault at the Mall of America.  He later pleaded guilty to trespassing in connection with the theft of a laptop from a UM dorm room, and that was it for his time in St. Paul.  Hoiberg apparently doesn't mind:

"I am aware of Royce’s situation at Minnesota," Iowa State head coach Fred Hoiberg said in the statement. "I have talked with a lot of people who are close to him, spoken with Royce in person multiple times and feel he is sincerely committed to meeting the expectations we have for our players. On one of his campus visits, Royce also met with institutional staff both inside and outside of the athletics department and he left very positive impressions on everyone."

Hoiberg has good reason to think White can keep his nose clean at Iowa State; they don't have malls for him to pillage, and it's tougher than you think to steal a farm animal from an ISU dorm.  In any case, by playing for both Minnesota and Iowa State, Royce White moves up to #3 on the BHGP Terrorist Watch List behind Osama bin Laden and Pat Fitzgerald.