Where I Come From: Expectations for 2010

Share All sharing options for: Where I Come From: Expectations for 2010

This post is sponsored by EA Sports NCAA Football 2011. 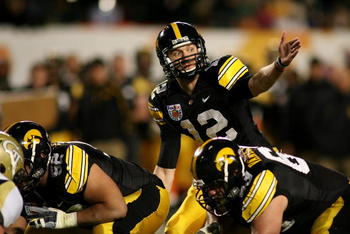 Think back to this time last year: Iowa finished the 2008 campaign on a roll, winning its last four games to finish 9-4, with victories over then-#3 Penn State and SEC also-ran South Carolina.  For the first time in a long while, there was optimism in Iowa City, and yet there were holes to fill at halfback and defensive tackle and a brutal schedule to negotiate.  In fact, given the number of juniors-to-be in starting spots and the vicious road slate, 2010 began looking like the breakout season even back then: During a discussion of how we were going to approach 2009, Jacobi and I had the following discussion:

HS: Would it be out of line to write a 2010 preview right now?
OPS: Because all the returning players and the schedule mean we could make a run at the Rose Bowl?
HS: Yeah.
OPS: Absolutely not.

Like so many things we discuss, that preview was engulfed by other events, like Jewel Hampton's knee exploding, and never made it to the Internets.  But now it's July 2010, and we're a mere 55 days from the opening kick, and expectations are exactly where we thought they would be: Astronomical.  Last week, Bob Bruce (not that Bob Bruce), who has covered this team for eons, said that he can't remember a more anticipated season.  Save for possibly 2005, where Iowa had three consecutive top 10 finishes and a returning quarterback, no Iowa season in the Ferentz era has had the hype of 2010.  And that should scare you.

There are things we can learn from that 2005 season, because the parallels are eerie.  That year, Iowa returned a significant chunk of their top talent -- including a starting quarterback, a couple of halfbacks who missed chunks of the previous year with injuries, and the vast majority of a decorated defensive front seven -- from a team that finished 10-2 the prior season.  That 2004 team went 5-0 in games decided by 7 points or less, including Tate to Holloway in the season-concluding Citrus Bowl.  Iowa's 2005 schedule looked easier, as well; while the Hawkeyes were adding games at Columbus and the onetime Little Shop of Horrors that is Ames, a Big Ten schedule reset replaced Penn State and Michigan State with Indiana and Northwestern and brought Michigan to Kinnick Stadium.  The bloom came off the rose early, though, with a humiliating loss at Iowa State and a beatdown from the Buckeyes on the board before September ended.  That year was followed by a wholesale defection of talent to the NFL, which led to the lean years.  Let's not talk about the lean years.

This season, the case can be made for Iowa as a preseason top 5 team: Tons of returning talent, including America's quarterback, a halfback who missed 2009 with a torn ACL, and nearly all the defensive front seven, and the schedule flip brings OSU, PSU, Wisconsin, Michigan State, and Iowa State to Iowa City.  It sets up perfectly for a run by a team that won 11 games last season on the back of a stifling defense and an offense largely built with paper clips and duct tape.  And yet, the prior year's string of cardiac arrest-inducing wins is ripe for correction, and the few holes that exist were previously filled by NFL-level talent.  The red flags are there.  Observe and adjust accordingly.

Iowa is best when coming from nowhere, and while they'll likely be ranked in the preseason top 15, they're not the Big Ten frontrunner.  Ohio State may well start the year atop the polls.  Wisconsin returns virtually everyone from a team that beat Miami to close out 2009.  Penn State is one quarterback away from returning to the top of the conference.  Rumors of Michigan's demise may be greatly exaggerated.  These are giant anvils poised to drop on us this fall; to meet the otherworldly expectations, Iowa must avoid them all.  We keep saying that is unlikely, if only to keep ourselves from flying too close to the sun, but the fact is it's never been more likely that Iowa could run the table.  We're not expecting it, but we won't be shocked if it were to happen.  That's as good as expectations in Iowa City can get, and that's where we sit with 55 days to go.