It's Not Plagiarism If You Link To It Smells Fear

Share All sharing options for: It's Not Plagiarism If You Link To It Smells Fear

Danger Denard Robinson! We'd been waiting in rapt anticipation for the Iowa iteration of Maize N Brew's "Players You Will Learn To Hate," hoping they'd choose something like "all of them." Alas, no such luck, but we can hardly be surprised at their selection of Adrian Clayborn:

[H]e's the guy that is most likely to actually kill one of our players simply by tackling them. He's basically a cement truck designed by Ferrari. Last season he absolutely lowered the boomstick on Tate Forcier during Michigan's narrow loss to the Hawkeyes, and it's pretty evident why Forcier wasn't in that game at the end. I'm not sure I'd even be able to say my name, much less spell it, after the hits Clayborn dished out. You'll notice the blocker being disposed of like an old Kleenex is Steve Schilling, one of our best offensive linemen. That's not good.

If he isn't blocked, we're screwed. It's as simple as that. If he gets loose in the backfield they'll be taking Tate or Denard off in a box.

Now, some of MnB's preview is hyperbolic to the point of absurdity, so let's not take everything at face value; after all, if Denard Robinson hears Clayborn's footsteps, he's probably going to take off and get some yardage out of it. He's just a little mobile. That said, on behalf of the other starting D-linemen, we wholeheartedly encourage Michigan to double Clayborn on every single play.

Meanwhile, at Ball State blog (yes, one exists) Over The Pylon, the gents preview the September 25 Iowa game. How afraid are they? CODE ARGYLE AFRAID:

Bottom line, Cardinals fans is measured and realistic expectations. Even worst case scenario curb stompings won’t upset me all that much considering the talent on that side of the field. A 14-24 point loss I would consider "expected", less than 14 and I’m actually somewhat happy, and if we win, I’m driving to Muncie and tearing down the goal posts. Let Stan Parrish try and stop me.

This is one of those games where (at least to me) "success" is defined as moments of good play, an injury-free day, and not getting our innards blasted all over the field. All three of those things happen and it’s a successful Saturday.

Now, lest we be hubristic and start measuring the Hawkeyes' heads for Burger King crowns (the crowns of champions, as everyone knows), the Hawkeyes are going to face some actual, y'know, competition. There'll even be plenty of opposing players who can beat their man one-on-one. Falling into that category is easily 80-90% of cidsports' list of the best players by position that Iowa will face in 2010. The usual suspects (Terrelle Pryor, Evan Royster, Stefan Wisniewski) are there, but there's also a not-so-subtle reminder that losses can come from anywhere in the Big Ten:

Uh... yeah. HawkMania profiles Riley Reiff and calls him the anti- Julian Vandervelde," in terms of jocularity with the media. Certainly that's true; if anything, it understates the awkwardness of Reiff's press sessions. Here's video, but beware: it's really boring.

And that's fine, we guess; not everybody can be DJK. Plus, Reiff is a masher on the field; how he approaches the typical fluffy press questions is, by way of comparison, largely irrelevant.

WrestleScoop reports that John Cena praised WWE developmental talent "Big E Langston" for his ridiculous lifting numbers. While that's usually of positively zero concern to you or me, WS says Langston's real name is "Etorre Ewan." We assume they mean Ettore Ewen, the former Iowa defensive tackle (and noted workout warrior) whose career was derailed by knee injuries. And judging by a picture from Ewen's Iowa days, that seems like a pretty safe assumption. 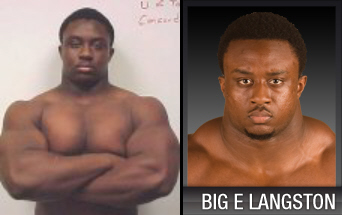 Yeah, the pic on the left is his "before." And those lifting numbers, by the way? 611 squat, 490 bench, 755 deadlift. We are officially frightened.

More on concussions, this time from former Washington Huskies and St. Louis Rams/Cleveland Browns TE Cam Cleeland. Harrowing stuff, though he seems to be working toward a happier ending than many of the players we've read about so far.

And finally, Excitebike deserves so much better than this. Can't we get the poor thing a ramp? The world needs more ramps.