The off-season is a long and tiresome trudge, so how can we best get through it?  By looking ahead to next year, of course.  So, in the spirit of forward thinking, we present a team-by-team look at Iowa's 2010 football opponents (with looks at Illinois and Purdue thrown in for good measure so our Big Televen brethren don't feel ignored).  Next up: the Ball State Cardinals.  Bring us your MACrificial lambs, they're our, uh, victims.

In case you missed it... PART ONE 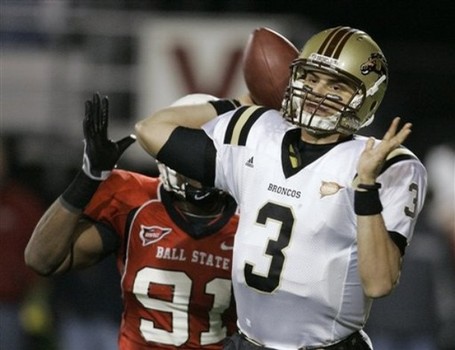 DE Robert Eddins lurks like a shark.  A land shark.

OK, what should we expect when Ball State doesn't have the ball?  Another team with an experienced, high-level DE; if nothing else, Iowa's untested tackles should be fairly battle-tested by the time Big Ten play rolls around.  Ball State's lead DE (and best defender) is Robert Eddins; he was 2nd-team All-MAC in 2009 with 55 tackles and 7 sacks.  Phil Steele likes him so much he put Eddins on his 1st-team All-MAC defense.  His partner-in-crime from a year ago, 33-year old (yes really) Brandon Crawford is gone, so they'll be breaking in a new face, mostly untested JR Andrew Puthoff, who spent some time at TE in 2009.  The interior of the line is also a mix of experience and freshness.  Rene Perry provides the experience (16 career starts, 32 tackles) and Adam Morris provides the freshness (1 career start, 12 tackles, 4 TFL).  Eddins is the one to watch here, though.

Two-thirds of the linebackers have experience; Davyd Jones started all twelve games in 2009 and racked up 100 tackles (8 TFL) and 3rd-team All-MAC honors, while Travis Freeman had eleven starts and 93 tackles a year ago.  Less tested is the other LB spot, where Tony Martin started only four games and had 28 tackles.  Jones looks solid, but as a whole the LB corps could be a bit iffy.

The secondary is led by FS Sean Baker, who was the MAC Freshman of the Year in 2008, accumulating 94 tackles and 16 passes defended (including six interceptions), and scoring a pair of defensive touchdowns.  Injuries limited him in 2009, and he only came up with 61 tackles, 7 passes defended (including two interceptions), a forced fumble, and a fumble recovery.  He should be fully healthy in 2010 and if he regains his 2008 form, he'll be a prime candidate to be on the receiving end of one of Ricky's oh-so-generous STANZIBALLS.  The other safety figures to be Kyle Hoke (nephew of former BSU coach Brady Hoke), making the move from being a special teams guy to starting strong safety; he could be one to pick on deep if possible.  The corners are expected to be Jason Pinkston and Charlie Todd; Pinkston had 25 tackles and three interceptions in 2009, while Todd had 80 tackles and one interception.  Baker and Todd both make Phil Steele's preseason 4th-team All-MAC, so they're, um, slightly worthy of note, it seems. 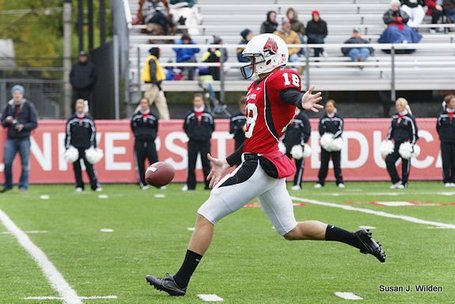 PUNTER U (for reals)

And just how "special" are their special teams?  Ball State proclaims themselves "Punter U," (page 7) which is not a moniker most programs would wear with pride.  But, hey, punters need love, too.  So, as you'd probably expect from that self-proclaimed rep, they have a pretty solid punter: Scott Kovanda averaged 40.0 yards a kick (35.9 net) year ago and Phil Steele thinks he could be third-team All-MAC this year.  Likewise, Ian McGarvey's been a solid kicker for the Cardinals: 41/51 over his career, with a long of 48 yards.  He's been accurate from distance, too: 13/17 from 40+ yards.  Charlie Todd averaged 11.7 yards per punt return in 2009, while Eric Williams led the way with 23.9 yard per kick return.  Special teams may be the strong suit of Ball State, frankly.  Hopefully, Kovanda and Williams are very busy against Iowa and Todd and McGarvey have nothing to do. 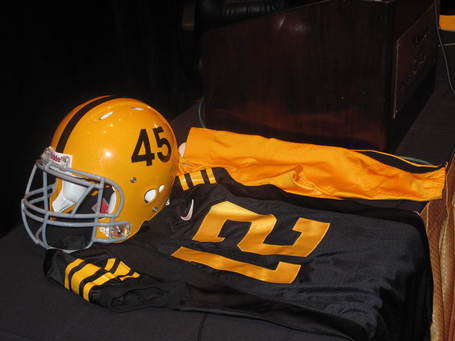 Alright, brainiac, what's gonna happen?  Iowa will look very snazzy in their throwback uniforms.  Beyond that...

That's a combined record of 10-2 against MAC teams under Ferentz, with an average score of Iowa 36, MAC team 13, and an even more lopsided margin of Iowa 39, MAC team 10 in the ten Iowa victories.  Of course, even before Iowa's struggles against lesser competition a year ago, we knew better than to overlook MAC opponents; Western Michigan taught us that lesson all too well and the wounds of that loss still haven't fully healed.  Still, if Iowa is as good as we think they are, they really shouldn't struggle all that much with Ball State, even if they are improved from a dismal 2009 campaign (and CFB's reigning Nostradamus, Phil Steele, has them on his Most Improved teams list).  Ball State's few offensive strengths (a talented RB and an experienced OL) are complicated by the fact that they have to try and handle the beastly Iowa defensive line.  Despite his diminutive size, MiQuale Lewis isn't a burner at RB; he's more of a tiny little workhorse back (a workpony back, perhaps?).  Speedy backs and big pounding backs have given the Iowa defense some trouble in the past, but a guy like Lewis seems tailor-made to get gobbled up by the defense.

Defensively, Ball State has a handful of good players (Eddins, Jones, Baker), but that probably won't be enough against Iowa unless Stanzi is an especially generous mood or the Iowa offensive line is still having difficulty gelling.  By the fourth game of the season, they should hopefully be cohesive enough to pound away at Ball State's front, opening up some easy play-action pitch-and-catch for Stanzi, McNutt, and DJK.  Yes, a year ago Iowa struggled with MAC-like competition and, yes, Iowa's last few games against MAC opposition haven't been blowouts.  So there's certainly a possibility that this one won't be a blowout, either.  But most of the struggles against MAC teams came from the very unimpressive 2006 and 2007 Iowa teams and, as we well know, last year's team was just plain weird.  History is on the side of Iowa having its way with Ball State -- maybe not quite to the tune of 56-0 again, but a comfortable win should be in the offing. 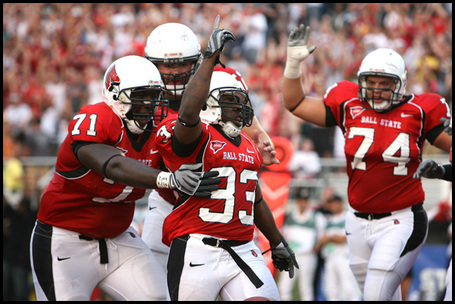 So how's the rest of their season gonna play out?  It's not exactly going out on a big limb to suggest a 2-2 start for them, considering they open with a pair of FCS teams (although they did lose to an FCS team, New Hampshire, in 2009) and then play back-to-back road games against Big Ten foes (Purdue and Iowa).  You might recall that this is why they tried to back out of the Iowa game last year.  After that they enter MAC play and things get dicier, since our knowledge of MAC football falls somewhere between the yawning black hole that was our Ohio Valley Conerence knowledge and the exploding supernova that is our Big Ten knowledge (relatively speaking, anyway).  Phil Steele picks them to finish third in MAC West and calls them a "legit MAC West contender."  Okay then.  They get the two teams he picked ahead of them in the MAC West (Western fucking Michigan and Northern Illinois) at home and avoid his top two teams from the MAC East (Temple and Ohio), which seems like a good thing.

Given the number of close losses they had in 2009, the number of returning starters they have in 2010, and the relative ease with which MAC teams jump from the outhouse to the penthouse (see: Temple and Buffalo in recent years), it's not a huge stretch to predict them to improve by 3-4 or even maybe 5-6 wins if you're feeling really frisky.  On the other hand, Stan Parrish's track record as a head coach is so abysmal that you're probably better off betting the under when it comes to total wins for BSU this year.  As the experiences with Ron Zook and Tim Brewster in our own beloved conference have taught us, you'll rarely go broke betting on a bad coach to suck.