The off-season is a long and tiresome trudge, so how can we best get through it?  By looking ahead to next year, of course.  So, in the spirit of forward thinking, we present a team-by-team look at Iowa's 2010 football opponents (with looks at Illinois and Purdue thrown in for good measure so our Big Televen brethren don't feel ignored).  Next up: the Ball State Cardinals.  Bring us your MACrificial lambs, they're our, uh, victims. 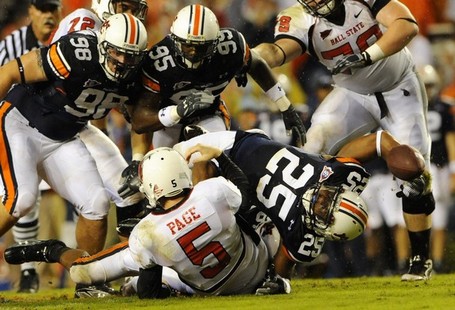 Where the devil do they play?  At lovely John B. and June M. Scheumann Stadium, so named because they ponied up more coin than anyone else the last time the stadium was renovated.  Hey, money has its privileges.

What conference do they call home?  The mighty mighty MAC, which hasn't been subject to any conference expansion rumors -- yet.

What did they do last year?  Nothing good.  They went 2-10 under new coach Stan Parrish, a year after capturing the hearts of America when they started out 12-0 (before stumbling badly at the finish line and losing their last two games).  If you wanted to be charitable, you could argue that BSU was at least competitive most of the time -- seven of their ten losses were by ten points or less and only two teams (Auburn and Central Michigan) really put a beatdown on them.  On the other hand, they did lose all six home games, including one to fellow FBS cellar-dweller North Texas.  And one of their two wins came over an 0-12 Eastern Michigan game, which is not exactly something to toot your horn about too loudly.  Also, it's worth noting that their coach, Stan Parrish, has been pretty awful at the FBS level -- over four years (and change) at Kansas State and Ball State, he has a career mark of 4-41, including a 34-game losing streak.  He lost his last twenty-six games at Kansas State and his first eight games at Ball State, finally breaking the hex with that win over EMU.

So do they have, like, history with Iowa?  Not really.  The two teams met once before, in 2005.  It didn't go well for the Cardinals.  That game did contain a few fun trivia notes for Iowa, though: Jovon Johnson's 90-yard punt return touchdown was Iowa's last punt return for a score until Andy Brodell ran one back against Iowa State in 2008 and the game was also the debut of Shonn Greene, who rumbled for 116 yards and a touchdown on 18 carries.  Little did we know that three years later he'd put together the greatest single-season for a running back in Iowa history.

Yes, it would be better with actual video.  Alas.

How many of these fools were around a year ago?  Seventeen, according to the pre-season preview.  The returnees include ten of eleven offensive starters (all but one wide receiver) and seven of eleven defensive starters, including half the defensive line, three-quarters of the secondary, and two-thirds of the linebacking corps. 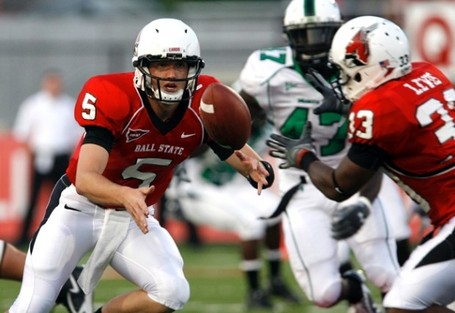 Regrettably, Page spent many weeks thinking he was playing "hot potato" rather than football.

What should we expect when Ball State has the ball?  Not a whole hell of a lot.  They ranked in the bottom fifteen of the nation in points per game, total offensive yards per game, and passing yards per game (though they did have a respectable enough running game).  They scored twenty points or less eight times.  They did manage to put up 30 points against Auburn last year, but almost half those points came after Auburn had racked up a 47-17 lead through three quarters.  Suffice to say: they were not a high-powered offense.

The expected starter at QB is Kelly Page, a rising sophomore who'd had the sort of season you'd expect out of a freshman: 109/207, 1019 yards,  7 TD, 9 INT, and 18 sacks in seven games (an injury forced him to sit out the last five games of the year).  He was also a slight rushing threat (128 yards and two touchdowns on 53 carries, although that also includes sack yardage).  No other QB on the roster has any experience, so barring the discovery of a QB prodigy among the underclassmen options, it's going to be Page taking snaps when BSU comes into Kinnick. 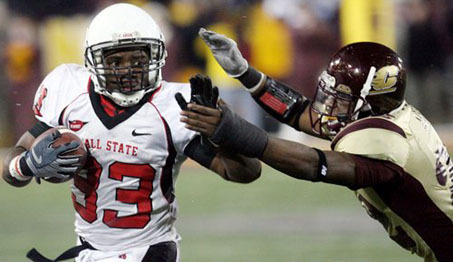 The one position of strength of Ball State on offense is RB, where they return mighty mite RB MiQuale Lewis.  Lewis had an injury-plagued year in 2009, only accumulating 871 yards and 5 touchdowns on 181 carries, but he was spectacular in 2008, running for 1736 yards and 22 touchdowns on 322 carries.  If he's healthy, he's a legitimate threat.  On the other hand, the last time a much-hyped tiny MAC RB set foot in Kinnick, he was shut down pretty decisively.  Still, Lewis figure to be that the defense gameplans to stop.

At WR/TE, Ball State returns all five of 2009's top targets.  The downside to that would be that none of the 2009 guys stood out all that much.  Briggs Osborn led the team with 51 receptions and 461 yards, but had just one touchdown grab.  Torieal Gibson was second on the team with 25 catches and 337 yards and led the team in touchdown receptions (3).  Osborn and Gibson are also fairly small in stature (both under 6', 180 lbs.) and only Daniel Ifft (6'3", 183 lbs.) has any kind of size among the receiving corps.  With a year's experience the receivers ought to be improved, but this isn't the sort of unit that should strike much fear into a unit as experienced and talented as Iowa's secondary.

All five of the projected starters along the offensive line started five or more games a year ago, so experience and continuity is on their side; how talented they are is up for debate.  In any event, their job is to neutralize the Iowa defensive line, which should be a tall order.

Next: A look at the Ball State defense and what to expect from the game (pretty throwback uniforms) and the rest of Ball State's season.