Share All sharing options for: The Cy-Hawk Trophy Sucks -- Let's Fix It.

Look, it's not my intention to piggyback off everything Morehouse writes for the Gazoo (I swear), but frankly he struck a nerve when he wrote about the Cy-Hawk Trophy earlier this week.  It's something I've been thinking about for a long, long time.  As he so rightly noted, it's ugly.  In fact, I'd imagine he meant to write that it's really fucking ugly and a damn abomination, but the Gazette's censors put the kibosh on that.  Jerks.  But, hey, we all know the score: it fucking sucks.  The only other rivalry trophy that gives it a run for its money in the "holy hell that's a travesty" department is the Land Grant Trophy.  But that one isn't our concern.

The Iowa-Iowa State rivalry deserves -- nay, demands -- something better than the Cy-Hawk Trophy, a piece of shit that looks like it was cobbled together in twenty minutes by a meth-addled shop teacher.  Which, given the mystery surrounding its origins, could be true -- you never know. And don't just trust my judgment.  Even Ferentz thinks it's terrible (from Morehouse's article):

"When we beat Iowa State two weeks ago, we won this trophy called the Cy-Hawk Trophy," Ferentz said. "Quite honestly, it looks like something that somebody made in their basement. It seems like a Soap Box Derby project or something like that."

First idea -- logos.  That's good, right?  They're instantly identifiable symbols and powerful images.  The problem is they're not necessarily timeless -- especially if you're Iowa State and you change logos every ten years or so.  It'd look a bit silly to slap the tigerhawk and the block I-state on a trophy if ISU devises some wacky bird logo in a few years and decides that's their ticket to branding fame and fortune. 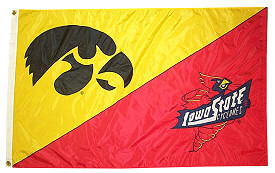 Maybe like this?  Only not so ugly.  Though that may be impossible with I-State's logos involved.

Second idea -- some sort of iconic Iowa imagery or concept.  But what the hell qualifies there?  The Sullivan Brothers?  Grant Wood's American Gothic?  A barn?  A picture of rolling farmland?  None of those ideas really seem that exciting, though the idea of football players parading around a framed print of American Gothic has a sort of perverse appeal. 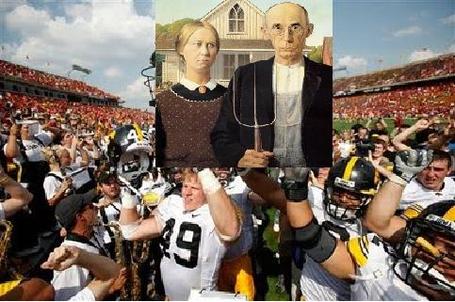 Probably not what Grant Wood had in mind.

Third idea -- what's more intrinsically Iowan than agriculture?  Iowa State may get the ag school rep, but they don't have sole claim on the concept.  Farmers like the Hawkeyes, too, and as the helmets show, Iowa respects farmers.

But what sort of agricultural symbol to use?  Animals are out of the question -- we already play for a pig and a bull. What's left for Iowa State?  A sheep?  A chicken?  While there's a certain absurdist appeal to playing for a big metal chicken, it's not exactly the mightiest or most noble member of the bird kingdom. 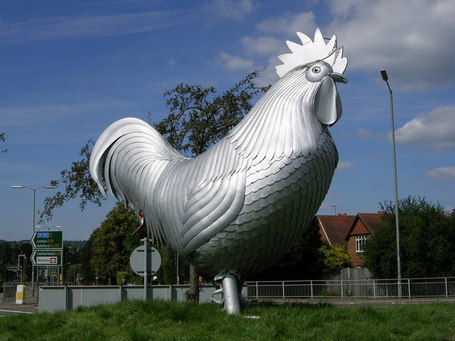 Perhaps slightly bigger than we need.

What about tools?  Wisconsin and Minnesota play for a big damn ax, after all.  On the other hand, there's a certain coolness factor to a big axe that probably isn't there for a big hoe.  Maybe a big sickle, if you want to go old-school? Downside?  Could be dangerous -- do you really want a bunch of adrenaline-fueled 20-year olds swinging around a giant sickle?  Other downside?  Sickles were co-opted as a symbol by the Soviets and a team led by Ricky Stanzi isn't going to stand for any pro-Soviet nonsense. 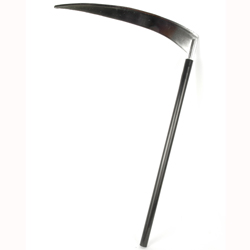 This could definitely take an eye out.

No, there's only one way to go if we really want to blow this out and come up with one kick-ass rivalry trophy... TRACTOR.  It's tough, it's fundamentally Iowan, and hell, one of the world's premiere tractor manufacturers is located in the Quad Cities (and, sure, technically John Deere is in Moline, but let's not quibble). And, yes, you could just go for a snazzy gold or bronze tractor model mounted on some wood.  It'd be a step up on the Cy-Hawk Trophy, for sure.  But we can do better.  Why not... a REAL GOLD TRACTOR.  Yeah. 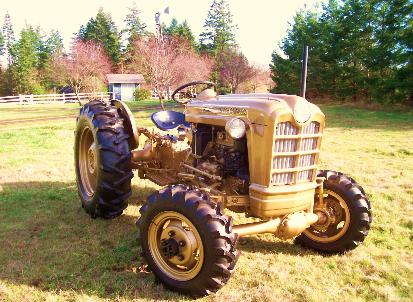 Win the game, sprint across the field and climb on that -- now we're talking.  Or maybe I just had a little too much to drink.  I'm just brainstormin' here.  You got a better idea, throw it in the comments. (H/T to my friend Joel for his help.)