Dan Beebe Is In Denial Something Fierce

Share All sharing options for: Dan Beebe Is In Denial Something Fierce 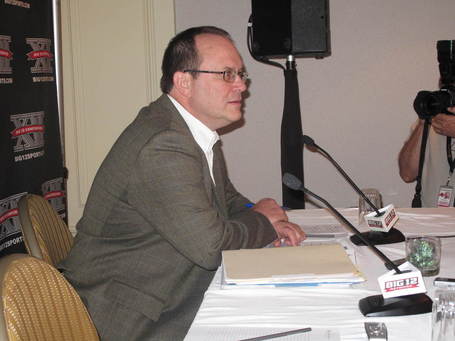 EVERYTHING IS FINE.  PLEASE IGNORE THE FLAMES AND SCREAMING AND SCREECHING TIRES BEHIND THE CURTAIN.  EVERYTHING IS UNDER CONTROL.  NOTHING TO WORRY ABOUT HERE.

Friend of the Pants Scott Dochterman checks in again with another report from the Big XII meetings today and while things weren't quite as overtly crazy as they were Thursday, the smoke signals coming out of the meeting were not so good regarding the stability and continued existence of the Big 12.  Unless you're Big 12 commissioner Dan Beebe, that is.

"Based on the conversations that we’ve had, I think we’re in a very good position," Beebe said.

Apparently in Beebe's world, being in "a very good position" means having half of your league's teams being all but openly courted by the Pac 10 and being discussed as serious targets of acquisition by high-level Big Ten officials.  Then again, Beebe thinks everything is just super with the current system, so his perception of reality might be a little fucked.

"What we have now is pretty good and to tinker with it might be a risk," Beebe said.

Actually, Dan, if what you have now "is pretty good," Big 12 teams probably wouldn't be the hottest targets for expansion.  What you have now pays even the biggest and best teams in the league half of what Indiana pulls in from the Big Ten and has many of the northern members of your league increasingly frustrated with the steady consolidation of power southward.  But, wait, WON'T SOMEONE THINK OF THE CHILDREN --

"Nonetheless, each of us has to be prepared with contingencies, and I think on balance you have to look at what the risks are to student-athletes and academic performance and welfare and the factors that weigh into that."

Is it unseemly that this is all about money, power, shoring up future revenue streams, and expanding geographic footprints?  Sure.  The draw of college sports is in the atmosphere, the tradition, and the passion of the events themselves, not in who has the biggest bank account or who can claim the most TV households within their territory.  But college sports have been on this road for a long, long time -- once television rights fees started ballooning, action like this became virtually inevitable.  Beebe sounds jealous because he's on the wrong side of the economic divide.

Mind you, at least Beebe's sticking to his stubborn, denial-fueled "EVERYTHING IS FINE, DAMMIT" stance; Iowa State seems to be adopting a more fatalistic attitude about the process:

"Iowa State and several other members of the Big 12 Conference are especially vulnerable under some of the realignment scenarios currently circulating, particularly one involving expansion of the Pac-10. We are doing everything in our power to represent the best interests of Iowa State in these discussions, but we also are sensitive to the huge uncertainty that has been created and recognize that the situation could evolve in directions that are not aligned with our interests." (emphasis added)

That's president-speak for "we're fucked and we hope our fans enjoy our exciting new rivalries with Utah and TCU (best case) or Kent State and Bowling Green (worst case)."  As always, BHGP continues to fervently hope for the MACrification of Iowa State.