Share All sharing options for: WORLD CUP OPEN THREAD, DAY 19: That Future's Getting Written, All Right

Notice something? Mainly, that of all those soccer players featured, only one's left before we're even done with the round of 16? Ronaldinho didn't even get invited to South Africa, Franck Ribery and France got embarrassed, Fabio Cannavaro and Disastro Italia fared no better, Didier Drogba had to play through a broken arm (didn't go so well), and Wayne Rooney scored as many goals in World Cup play as you, the reader, before England flamed out. Even smirkers Landon Donovan and Tim Howard were dispatched by Ghana, which isn't even a real country*.

The remaining star is Cristiano Ronaldo, the Portuguese forward featured at the end of the commercial. His team faces Spain today (1:30 PM, ESPN) to finish off Round of 16 play. Both teams are ranked in the top 3 worldwide by FIFA, making their matchup in the first round of knockout play detestably unfair. We might see PKs on this one. For once.

But back to the curse: there is one thing we noticed about this alternate universe where the currently suffering stars of the commercial are heroes. After all, there must be some reason why none of their good fortunes have come to pass... 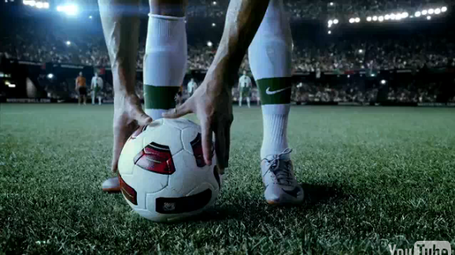 Also, bitter geographic rivals Japan and Paraguay play (8:30 AM, ESPN). This one's for all the sushi and/or sopa paraguaya!

*Not for long, anyway, if CIA director Leon Panetta's a soccer fan.