Share All sharing options for: It's Not Plagiarism If You Link To It Still Wants To Go To The Grotto

Honors, schmonors -- what about the grotto?!  As we noted earlier in the week, the Iowa football team (and a handful of players in particular) continue to drown in pre-season accolades; Andy Hamilton has a run-down of more of them.  But more importantly: Adrian Clayborn is mad.

The one thing missing for Clayborn in all this is a trip to the Playboy Mansion. He was recently named to the magazine's All-America team.

"There's no party this year," Clayborn said. "That's what kind of makes me mad, but I'll take the honor. It really is an honor. ... I wish we (got a trip to the mansion). I wouldn't mind taking a dip in the grotto."

Do you realize what you've done, Hef?  The last time Clayborn got mad, this happened: 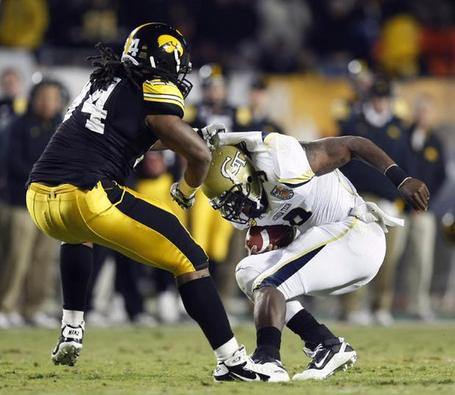 I hope you're prepared for the havoc that Clayborn intends to wreak on opposing teams this fall, Hef.

"We're going to take it to Eastern Illinois. We're not going to have a repeat of UNI. We'll start off there."

May God have mercy on EIU.

Welcome aboard, but what does he think of the Dillon-East Dillon rivalry?  In Caring Is Creepy news, Iowa picked up its fifth verbal commitment of the recruiting season, landing WR Austin Vincent from DeSoto, TX.  Vincent said Erik Campbell described him as McNutt-like, but at 6'2", 171 lbs., he's got some growin' to do before that's an apt comparison, at least physically.  Hopefully he's as glue-handed as McNutt proved to be last year.  Vincent is the third receiver to verbal to Iowa this spring and, according to him, the last.

Which may in fact be true: the three guys on board should balance out the three departing seniors (DJK, Sandeman, and Chaney) and incoming freshman Don Shumpert, previously rumored to be shoring up the depth at safety, is now going to be starting out at wide receiver.  FUN FACTZ: Vincent becomes both the second recruit named "Austin" (joining Austin Blythe) to verbal to Iowa and the second recruit with two first names (joining Marcus Grant) to come aboard.

Your obligatory expansion updates.  No, nothing about more teams being added -- we aren't going to learn more on that front for months, most likely -- but there is a little chatter about divisions and scheduling issues.  ESPN's Adam Rittenberg notes that the former should be settled by late August and talks to Big Ten sources who hammer home what everyone drawing up division plans should already know -- geography be damned:

How far back should the ADs go to evaluate programs?

"You have to look with a wide lens," Burke said. "You have to look over a 50-year period and look at who’s been consistent. If you take a snapshot of a five-year period or a 10-year period, you may miss it. Clearly, Michigan and Ohio State and Penn State and Nebraska, if you look at a 50-year history, are your four biggest brands. It doesn’t mean they win all the time, but they’re your biggest brands. I don’t think there’ll be any disagreement among all the Big Ten ADs about that.

"You’re not going to stack all four of them in one division. You’re going to try to create some level of parity."

If you're still drawing up divisional alignments that have Michigan, Ohio State, and Penn State in the same division... UR DOIN IT WRONG.  It's not happening.

And as far as scheduling goes... a nine-game conference schedule is very much on the table.  If that happens, say goodbye to virtually all interesting non-conference match-ups involving Big Ten teams.

We like meaningless awards.  In the throes of the mid-summer doldrums, BTN did what any self-respecting network would do to drum up some content: create some meaningless awards!  While nominated in multiple categories, Iowa took home glory in only two: Men's Team of the Year (Iowa Wrestling) and Best Game (Iowa's OT loss to Ohio State in football).  Kirk Ferentz and Tom Brands lost out on Men's Coach of the Year to Tom Izzo, while Lisa Bluder lost Women's Coach of the Year to Penn State Women's Volleyball impresario Russ Rose.  The "7 got 6" finish lost out to Michigan-Ohio State hoopyball in the Big Ten Tournament (if memory serves, Evan Turner drained a 40-foot heave to give OSU the win) and Turner also aced Iowa (and Adrian Clayborn) out of the Breakout Performer of the Year category.  None of those losses are terribly surprising, although the fact that Adrian Clayborn's first-half demolition of the Georgia Tech offense in the Orange Bowl wasn't even nominated for Most Dominating Performance is, frankly, flabbergasting.