The off-season is a long and tiresome trudge, so how can we best get through it?  By looking ahead to next year, of course.  So, in the spirit of forward thinking, we present a team-by-team look at Iowa's 2010 football opponents (with looks at Illinois and Purdue thrown in for good measure so our Big Televen brethren don't feel ignored).  Next up: the Penn State Nittany Lions.  Them again?

Where the devil do they play?  That would be Beaver Stadium, also known as the world's largest erector set.

What conference do they play in?  Um, I think we can discontinue this portion of the preview; from here on in, everyone's in our very own beloved Big Ten conference.

What did they do last year?  Ho-hum.  Just your run-of-the-mill 11-2 season.  They rolled through the early powderpuff portion of their schedule, only to have their offensive line (and Daryll Clark) collapse in horrendous fashion against Iowa in a much-hyped primetime "revenge game."  That game gave us this beloved image, too: 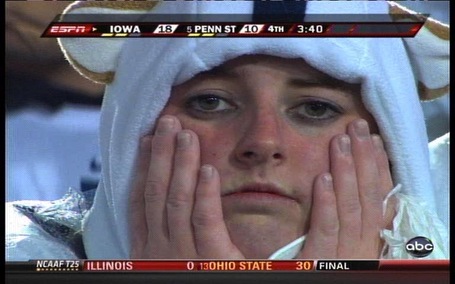 Oh, and this sequence.  That was pretty neat.

(click through to see it in all its glory)

Post-Iowa, they got things back on track with a string of comfortable wins over mighty Eastern Illinois and a string of Big Ten bottom-dwellers (oh, and just Northwestern, too).  Unfortunately, in their other big regular season game of the year, the Nitts also came up short, getting rolled by Pryor and the Buckeyes.  Yet again, though, the Lions picked themselves up off the canvas and went back to the business of beating their lessors, before wrapping things up with an ugly win over LSU on one of the worst fields of all-time.  Penn State's 2009 season can -- and perhaps should -- serve as a warning note to Iowa fans as we dream of Pasadena or Glendale or other BCS destinations.  Like Iowa in 2010, Penn State entertained their toughest foes (Iowa, Ohio State) at home.  Like Iowa, they featured a returning senior quarterback.  Like Iowa, their biggest concern was rebuilding a depleted offensive line.  Can Iowa succeed where Penn State failed (relatively speaking)?  Time will tell.

So do they have, like, history with Iowa?  You could say that.  Ferentz's record against Penn State (7-2) is the bizarro version of his record against Ohio State (1-6).  Penn State fans are often quick to point out that many of those wins came during Penn State's "dark ages" from 2000-2004.  And there's a little truth to that, since four of the wins came in years when PSU finished below .500.  But whatever: we prefer to simply acknowledge the undeniable truth that Ferentz pwns JoePa.  Penn State's been out of the dark ages the past two years -- and the story was still the same: Iowa wins and sad Penn State fans weep bitter tears of defeat. 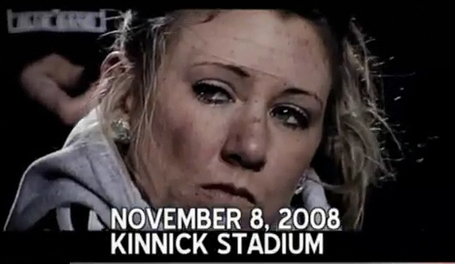 Still, aside from the 2008 game, when Daniel Murray's kick heard 'round the world drilled Penn State out of national title contention, the Iowa-PSU showdowns have almost always meant far more to Iowa than they have to Penn Sate. The 2000 win was significant for being Ferentz's first road win at Iowa (and just his second Big Ten win) and the first Iowa road win in over two years.  The 2002 win proved that the team wasn't going to be haunted by the specter of the ghastly loss to Iowa State two weeks earlier -- and that a special season might be possible.  The 2004 win was an emotional release for the Ferentz family just days after the death of Kirk Ferentz's father (and a game that set offensive football back a few decades).  The 2008 win was not just an opportunity to play spoiler to PSU's national title aspirations -- it was an opportunity to reverse course on three years of mediocre results and announce the return of Iowa football to prominence.  The 2009 win was a chance to confirm that 2008 was no fluke -- and to add Daryll Clark to the ranks of the bitchmade.

What's the one thing you should know about Penn State?  Did you know Beaver Stadium holds a jail where Paterno imprisons and murders his enemies with the add of a '70s Russian lounge singer-cum-assassin?  It's true.

How many of these fools were around a year ago?  Phil Steele says 14 total -- 8 on offenses, 5 on defense, and a kicker.  Phil would never lie to us, right?

What should we expect when Penn State has the ball?  Lots of running the ball, most likely. 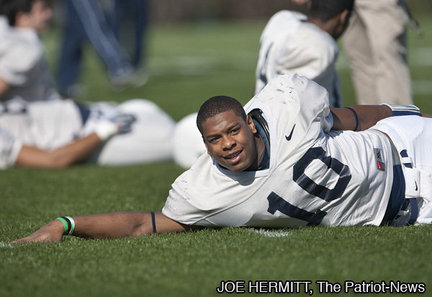 Stretching is important -- you don't want to cramp up and get decapitated by Adrian Clayborn, do you?

Few schools in the Big Ten are as unsettled at quarterback as Penn State.  With DC17 having exhausted his eligibility, the race is wide open for his replacement.  Kevin Newsome was the early favorite to replace him, but he didn't run away with the job during spring practice.  True freshman Paul Jones actually had the most impressive showing at the spring game, although that was mitigated slightly by the fact that he did his damage against second and third-team defenders.  Newsome brings more of a scrambling approach to the position (think Michael Robinson), while Jones is more of a traditional pocket passer (think Clark or perhaps a less-shitty Anthony Morelli). By the time they roll into Iowa City in early October, one of the two should have the position locked down, although at this early stage neither looks terribly worrying.  Freshman Robert Bolden and sophomore Matt McGloin may also be in the mix. 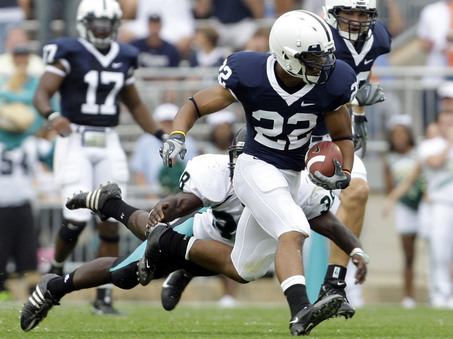 ZOOOM.  Teal on a football uniform?  When did PSU play the Carolina Panthers?

On the other hand, one position where Penn State's offense is well-stocked with talent and experience is running back, where last year's top two leading rushers, Evan Royster and Stephon Greene, both return.  Royster's stats were diminished from a year ago (2008: 1236 yards, 6.5 ypc, 12 TDs; 2009: 1169 yards, 5.7 ypc, 6 TDs), as were Green's (2008: 578 yards, 5.5 ypc, 4 TDs; 2009: 319 yards, 4.5 ypc, 3 TDs).  The leaky new offensive line seems like a better explanation for those less impressive stats than any sort of loss in ability on the part of Royster or Green.  Given the uncertainty at quarterback, it's not much of a stretch to think that PSU will rely heavily on Royster and Green this fall.  Neither Green (6 carries for 61 yards and 1 reception for 9 yards) nor Royster (59 carries for 245 yards and 1 TD; 3 catches for 19 yards) have had tremendous success against past Iowa defenses, though. 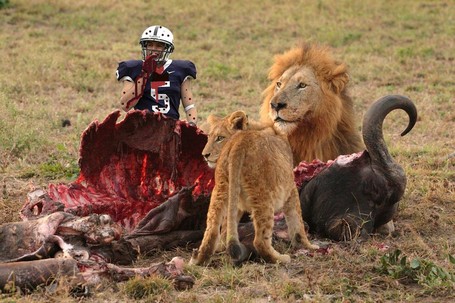 Be very cautious when approaching Graham Zug in the wild.  (H/T to Black Shoe Diaries.)

Penn State also returns quite a bit in the receiving corps -- their top five receivers in terms of receptions, yards, and touchdowns are all back, led by Derek Moye (48/785/6) and "General" Graham Zug (46/600/7).  Also returning are Chaz Powell (28/366/3, and best known for torching Amari Spievey like a cinder last year, although Phil Steele thinks he's moving to CB, in which case he could become the torch-ee rather than the torcher), Curtis Drake (8/98/0) and Justin Brown (5/78/0).  Of special note is the fact that they have an up-and-coming receiver by the name of Christian Kuntz, who may in fact be the illegitimate offspring of our very own Tyger Kuntz.  Having an experienced group of receivers back is nice, but their effectiveness could be limited by the inexperienced faces throwing them passes.  It wouldn't be too surprising if, through no fault of their own, the receivers enjoy less statistically impressive seasons this year as PSU breaks in a new quarterback and emphasizes its veteran running backs.

As for that much-mentioned offensive line... PSU returns five guys with starting experience in 2010, including 1st-team All-Big Ten C Stefan Wisniewski, who's moving to RG in 2010.  The other starters figure to be Doug Klopacz (C), Johnnie Troutman (LG), Lou Eliades (RT, moving from RG), and DeOn'Tae Pannell (LT, and best known for getting humiliated so thoroughly by Broderick Binns last season that Penn State had to replace him at halftime).  Despite the tremendous success Iowa had against many of these same faces in 2009, overconfidence would be unwise -- they are talented and they are another year more experienced.  That said, if you don't think Binns is licking his chops at getting another chance to bullrush Pannell onto the bench, you're nuts.  Outside of Wisniewski (a 1st-team All-Big Ten nod), none of these guys make Phil Steele's preseason All-Big Ten teams -- and he goes four teams deep and finds a spot for our very own somewhat-maligned Julian Vandervelde.  Let's just say we're not quaking in terror at the prospect of attacking this unit, especially with an explosive and dominant defensive line.

In many ways, the 2010 Penn State offense resembles the 2008 Iowa offense once Stanzi took over the QB job, full-time.  Inexperienced starter at QB?  Check.  Experienced, talented workhorse at RB?  Check.  Experienced, proven options at WR?  Check.  Reasonably experienced offensive line with an all-conference level returning starter and a key starter returning from injury?  Check.  That 2008 Iowa offense was one of the better Iowa offenses in the last five years, although that was due in part to its ability to rack up points on inferior defenses (Maine, Florida International, Indiana, Wisconsin, and good god almighty Minnesota).  That said, the projected 2010 PSU offense doesn't seem quite as good -- Royster's no Shonn Greene and the offensive line lacks an elite anchor at LT (Pannell is no Bulaga).

Oh, and just because: 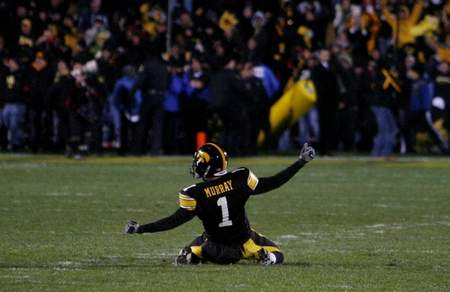 Next: A look at Penn State's defense, and what to expect from another Iowa-PSU game (hint: low-scoring, hard-hitting) and PSU's season as a whole.