The off-season is a long and tiresome trudge, so how can we best get through it?  By looking ahead to next year, of course.  So, in the spirit of forward thinking, we present a team-by-team look at Iowa's 2010 football opponents (with looks at Illinois and Purdue thrown in for good measure so our Big Televen brethren don't feel ignored).  Next up: the Arizona Wildcats.  Road opener?  In the desert?  Is this where we gulp?

Tim Dwight layin' the boom.  (TFJ to Scothawk, of course.)

Where the devil do they play? Why, at creatively-named Arizona Stadium in Tucson, AZ, of course.  Then again, the history of Arizona football is not exactly replete with legendary players or coaches...

What conference do they call home?  The Pac-10, which is just like the Big Ten, only with suntans instead of sweatshirts, tacos instead of brats, and even less national respect.

What did they do last year?  Saved Mike Stoops' job, for starters.  In all, they went 8-5 and 6-3 in the Pac-10, which was good enough to tie for second place in the league.  In some ways, Arizona's 2009 season was eerily similar to Iowa's 2008 campaign.  Just as those Hawkeyes lost a number of close games, Arizona lost its three conference games by a combined fourteen points, including a heartbreaking 2OT loss to eventual conference champion Oregon.  On the other hand, the Pac-10 may simply have been a league riddled with parity and multiple above-average (but no truly great) teams in 2009.  When faced with elite teams from other conferences (Iowa and Nebraska), Arizona struggled badly, losing 27-17 in a not-really-that-close game with Iowa and getting utterly humiliated by Nebraska in a 33-0 shitkicking in the Holiday Bowl. 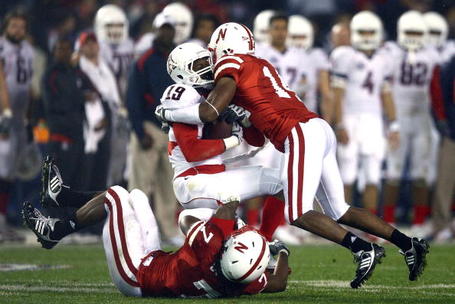 So do they have, like, history with Iowa?  Kinda.  For a non-conference team located thousands of miles away and with whom Iowa doesn't share any obvious ties, these teams have played twelve times, with the all-time series being evenly split at six wins apiece.  But there haven't been any momentous encounters -- they've never played in the Rose Bowl, for instance -- so in spite of the quantity of games in the rivalry, there's not a huge amount of quality involved in the series.  The most memorable play in the history of the rivalry was almost certainly Tim Dwight's crushing hit on an unassuming Arizona punt returner.  Although if you like incredibly low-scoring ballgames, the 1980 showdown was for you -- Zona won that one 5-3.

More recently, Iowa and Arizona tangled just last year, with the Wildcats coming into Iowa City and losing far more decisively than the 27-17 score would indicate.  Seven of those points came on a patented STANZIBALL, while the other touchdown came against Iowa's defensive reserves and with under two minutes to play, when Iowa had already pushed things to a 27-10 lead.  In fact, it wound up being one of Iowa's more decisive wins of the entire season.  Still, we'd be wise not to read too much into the results of that game for reasons we'll discuss below...

What's the one thing you should know about Arizona?  Look, don't even pretend you don't know the answer to this question.  We did an entire podcast about it.  It made the Marchifornication bracket.  Hell, it was even part of the breathless rumormongering that was the Iowa basketball coaching search.  It is, of course, the Gadsden Purchase, BHGP's favorite land purchase (suck it, Louisiana Purchase).

How many of these fools were around a year ago?  They bring back nine players with starting experience on offense -- everyone but the two tackles.  Arizona returns only four starters on defense, though -- both defensive ends, a cornerback, and a strong safety.  They also return both kicking specialists. 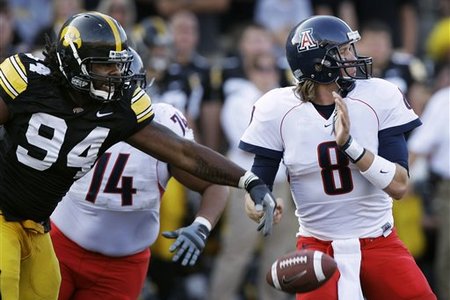 What should we expect when Arizona has the ball?  A year ago, Iowa had great success against the Wildcats because they were able to turn Arizona's QB position into a gaping black hole of fail.  Matt Scott got the start that day and was, quite frankly, completely awful: 4/14, 50 yards, 0 TD, 1 INT.  He was constantly harried by Adrian Clayborn and the Iowa front four and, really, the only surprise is that he only threw one arm-punt that got snared by Tyler Sash.  His bitchmaking was so complete in that game that he never started another game the rest of the season, which might, in fact, make it the greatest bitchmaking of the season for the Iowa defense.  No other QB was immediately banished to clipboard duty after coming into contact with the Black (and Gold) Hole.

However, Arizona's short-term loss may have been their long-term gain last year, as Scott's utter ineptitude against Iowa paved the way for Nick Foles to get a crack at the starting job.  He led the Wildcats to their only offensive scoring drive against Iowa, going 6/11 for 55 yards and a touchdown pass (albeit against a largely second-string Iowa defense) and took off after that, throwing for 250 yards or more in his next four starts and with nine touchdown passes to five interceptions.  In fact, Foles wound up with the second-best completion percentage in the Pac-10 (64%) and the second-highest amount of touchdown passes (19) -- despite barely playing in the first three games of the season.  Mind you, the flipside to that production is the possibility that Pac-10 defenses just weren't very good last year.  Pac-10 teams gave up points in bunches during bowl season and when faced with an elite Nebraska defense in the Holiday Bowl, Foles was every bit as bitchmade as Scott was against Iowa: 9/29, 48 yards, 0 TD, 1 INT.

Foles also makes the Arizona offense slightly more one-dimensional; for all his flaws as a passer, Scott was a much more dynamic rushing threat.  He had seven or more carries in four games in 2009 and finished the season with 309 yards on 41 carries, good for third-best on the team.  In comparison, Foles had more than two carries in a game only four times last year (and some of those "carries" were actually sacks) and had a whopping -73 yards on 27 "carries" for the season (or 16 actual carries, since he was sacked 11 times).  And, as Doc Saturday noted, under Foles the Arizona offense didn't stretch the field much (or, really, at all).  Of course, the kind of dink-and-dunk passing that Foles excelled at a year ago has hurt Iowa in the past -- jNW has run a variation of that attack to frankly devastating effect against Iowa for years now.  This game may give us an early barometer of just how much of a drop-off Tyler Nielsen and Jeff Tarpinian are from A.J. Edds and Pat Angerer in pass coverage.

Does this ever get old?  Of course not.

Arizona had a solid, but hardly spectacular running game in 2009.  They rushed for 2010 yards on the season, good for fifth-best in the league.  Keola Antolin (114-637-4) and Nic Grigsby (79-567-5) led the way for the Wildcats and both are due back in 2010.  Grigsby managed to bust off a 58-yard run against Iowa last year, but is probably most famous among Iowa fans for being caught from behind by Adrian Clayborn, despite his alleged status as a "speed back."  Despite that, Grigsby is a dangerous runner (he ran for 1153 yards and 13 touchdowns on 214 carries in 2008) and he was slowed by injuries for a good portion of last season.  Both Antolin and Grigsby are fairly similar backs: smallish backs (Grigsby's 5'10", 190 lbs, while Antolin's 5'8", 186 lbs.) built more for speed than power.  If Arizona wants to smash away at an opposing defense with more power, they typically turned to Greg Nwoko (6'2", 220 lbs.), who ran for 276 yards and three touchdowns on 76 carries.

At receiver, Arizona was big on spreading the wealth: six receivers caught 20 or more passes, five caught more than 300 yards (though none had over 600 yards), and four had two or more touchdown catches.  And only one of those receivers (Terrell Turner) is gone -- the others all return to terrorize opposing secondaries, including Juron Criner, who led the team in receiving yards (582) and touchdowns (9).  Arizona's other leading returning receivers are David Roberts (43-410-1), Delashaun Dean (42-396-2), and David Douglas (31-320-2).  Granted, Arizona's receiving stats are slightly inflated from playing in a pass-happy spread offense that emphasized short, highly catchable passes, but they're still an experienced bunch with a good mix of size and speed.

In the trenches, the Wildcats return four players with starting experience, including C Colin Baxter, who was second-team All-Pac-10 in 2009 and who's featured on multiple preseason all-conference teams this year.  A year ago, that offensive line paved the way for over 2000 rushing yards and gave up only 13 sacks all season (although playing out of a shotgun spread on offense most of the time certainly played a role in that low sack number, too).  The good news for Iowa is twofold: they had little trouble manhandling the Arizona OL for much of the game a year ago and Arizona's least experienced linemen will be lining up at tackle, where they will of course have to contend with the likes of Binns and Clayborn -- a daunting task for any offensive lineman in 2010, let alone a relative newbie. 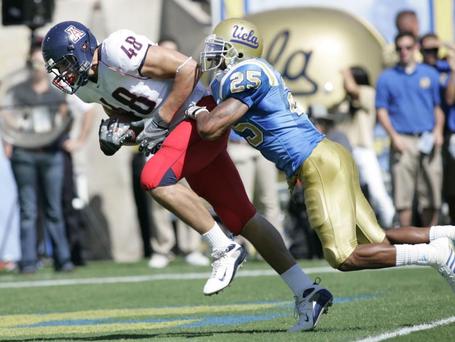 Don't worry: Gronkowski's taken his safety-dragging bro-tastic self to the NFL to get paid.

Technically, Arizona did lose their most talented receiver (TE Rob Gronkowski), but considering that he was injured for the entire 2009 season and didn't see a single snap, it's hard to see that as a particularly great hit on their 2009 production.  His stand-in at TE1, A.J. Simmons, is back in 2010, but TE was hardly a priority for the Arizona offense without Gronkowski -- Simmons had only 132 yards and one touchdown on ten catches.  With so many capable receivers, Simmons may again find himself playing a reduced role on offense, although the wildcard in the discussion of Arizona's offense is the fact that they'll be breaking in new offensive coordinators.  2009's playcaller, Sonny Dykes, departed to become the head coach at Louisiana Tech, leaving offensive line coach Bill Bedenbaugh and RB/TE coach Seth Littrell to split playcalling duties in 2010.  What changes they might make to Dykes' approach are largely TBD until the season begins; given their other responsibilities, one might expect a greater emphasis on running the ball and utilizing the tight end but that is nothing but idle speculation at this point.

Up next: A look at the Arizona defense and an examination of just why this game is one of the most feared on Iowa's schedule -- and whether or not it really should be.