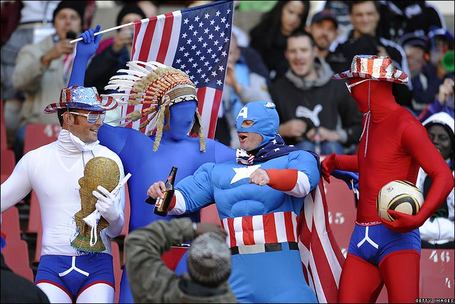 This has nothing whatsoever to do with today's games.  But it is AWESOME.

6:30 A.M. (ESPN): Japan ("The Blue Samurai") vs. The Netherlands ("Clockwork Orange"), in Group E.  Japan was one of the shock winners of the tournament's early going, knocking off an uninspired Cameroon side 1-0 with a goal from Kaisuke Honda, who gets the BHGP seal of approval for having awesome hair, a cool name, and being related to a professional wrestler.  Holland, meanwhile, has fans like this, so they too are tremendous.  Both teams like to attack and neither is well-known for their defensive prowess, so this could be fun.

9 A.M. (ESPN): Ghana ("The Black Stars") vs. Australia ("Socceroos"), in Group D.  Germany's yellow card-fueled stumble against Serbia on Friday leaves Group D wide open: a Ghana win would put them into the driver's seat in the group, while a win for the Socceroos would leave all four teams with three points apiece.  Madness.  Ghana's one of the few native African teams that's looked decent thus far and Australia had one of the worst showings of the tournament in their earlier match; based on that a Ghana win looks like it's in the cards.  Then again, Friday saw three unexpected results, so who knows what to expect anymore.

1:30 P.M. (ABC): Denmark ("Olsen's Eleven") vs. Cameroon ("The Indomitable Lions"), in Group E. Denmark was slightly unlucky not to get anything out of their match with the Dutch; Cameroon was just dire.  Depending on the result of the Japan-Holland game, the loser of this match could be the first team officially eliminated from the tournament.  Neither team was desperately interesting in their first game and Cameroon seems intent on squandering the talents of its best players; hard to get too jazzed about this game, frankly.