Share All sharing options for: Assume the Position 2010: Tight End

You know the drill: Every Thursday (or sometimes Friday, apparently) from now until mid-August, BHGP breaks down the depth chart, position by position, from most certain to least certain. 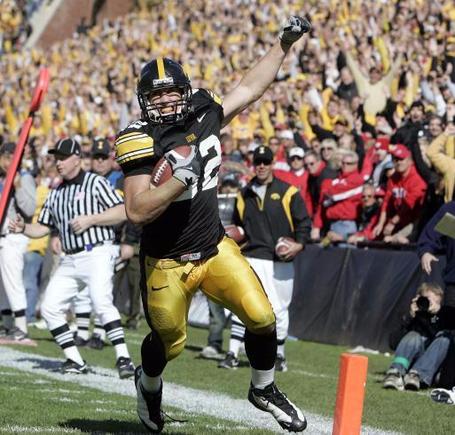 The first four installments of ATP10 were virtually interchangeable.  Each featured returning starters; five of the seven players profiled as starters has two or more years experience in Big Ten play.  You can quibble over the bottom of the depth chart, but there is a king of each of those four mountains.  Sometimes two kings.  Broderick Binns might become a duke.  He could be a pretty kick-ass duke.

Those days are over, though, as we get to the fifth installment.  There may be no serious doubt over who will be starting at tight end on September 5, but there are questions of how effective that starter will be, and there are serious concerns further down the line.  There are walk-ons and uber-recruits and everything in between, all fighting for a couple of spots at a position where Iowa keeps churning out pros.  ATP stopped being nice.  ATP just got real.

Coming out of spring practice, one thing was clear: After three years of picking up the pieces of Tony Moeaki's body, Allen Reisner is going to get his chance.  Reisner entered the program with as little fanfare as possible, a universal two-star rated player from 20 miles up Interstate 380 who was a bit of a position tweener and had all of one season at tight end in high school.  He would have been a prime candidate for a redshirt, but Moeaki sustained 17 separate and unrelated injuries in 2007, and Reisner vaulted into the backup tight end slot.  He racked up two catches in spot duty, plus a couple of tackles on special teams.  With Moeaki and Brandon Myers both returning for 2008, Reisner was scheduled to be relegated back off the depth chart.  The Flyin' Hawaiian was again grounded, though, and Reisner's role expanded, as he picked up 11 catches for 200 yards, including a team-high three (yes, you read that right; a team-high three) receptions against Iowa State and his first collegiate touchdown in the third quarter of the Wisconsin game.  With Myers gone last season, Reisner again played TE2, posting similar numbers.

Blocking won't be an issue for Reisner, as it's been his primary function for the past three seasons.  The question is whether Reisner has the athleticism and the hands to capably replace one of the most athletically-gifted tight ends Iowa has ever fielded.  The size and experience help, and the track record of similar guys like Myers and Scott Chandler is a positive sign.  Ferentz made it abundantly clear this March that Reisner had the top line; I'll gladly defer to his judgment for now.

Something's happening here.  What it is ain't exactly clear.  This time last year, we were anointing Herman as the heir apparent to Moeaki's throne, and for good reason: He's tall, he's big, he's been busy in the strength & conditioning program, he was good enough and motivated enough to play special teams as a true freshman, and he's received heaps of public praise from his position coaches and Kirk Ferentz.  And then we got to March, and it all stopped.  Entering his junior year, Herman should be competing with Reisner for the starting spot; instead, he's being pushed by unknown underclassmen and a true freshman who isn't even on campus yet.  It could be a simple motivational tactic by Ferentz, or it could be a legitimate race, but in a spring that began with three holes in the offensive line, the primary talk out of practice was the lack of a true #2 tight end.  It's not a good sign for Herman, who is otherwise a great story: Overlooked by the Big ten's big programs, he sent a highlight reel to the Iowa coaching staff and landed an offer sight unseen, then worked hard to become a true tight end.

Look at those measurables: Six-foot-seven, 250 lbs., played seven different positions (including quarterback, receiver, and free safety) in high school, 4.55 fake 40 time, top 5 tight end prospect from everyone.  Look at the options ahead of him: Herman seems to be fading, and Reisner is a stopgap with one year of eligibility left.  Look at the rest of the picture: Initially committed to Illinois -- by his own admission, just to stop the recruiting process -- but saw the light and came to a program that actually uses a tight end, for the express purpose of playing tight end and only tight end.  He's ready physically.  He's motivated mentally.  Look at that.  Look at that and tell me he shouldn't be on the field immediately.

They don't post them anymore (or, if they do, I can't find them), but on signing day a couple of years ago, the football program posted 2-minute highlight tapes of the new signees to GoHawks.com.  The first highlight films started the Legend of Casey McMillan, as Big Montana pulled around the end of the line and obliterated overmatched defensive backs.  But the other outstanding video belonged to Jonathan Gimm, not because he made a spectacular catch or showed fantastic ball skills; in fact, Gimm's video did not feature one catch.  Gimm's highlight video was block after block after block, every one maintained until three seconds after the play or the defender hit the turf, whichever occurred first.  Gimm probably doesn't have the frame for the offensive line (he's added about 30 pounds in two years, but 6'3" doesn't leave much more room), so it's unclear how he ever gets past a TE2 or fullback role, but his play on special teams last year left us intrigued by the possibilities.

There's no denying the football smarts: Furlong was originally a high school wideout, earning first team all-conference consideration as a junior.  He converted to quarterback as a senior and made all-state.  There's no denying the attitude:  Despite not seeing any action, Furlong was named an offensive team leader last season, and he has added 25 pounds of muscle since hitting Iowa City.  There's no denying the size:  Furlong is finally there, with sufficient weight to match the height.  He's buried on the depth chart, and he doesn't have the requisite special teams experience that you typically see from a player on Furlong's trajectory, but stranger things have happened.