Share All sharing options for: It's Not Plagiarism If You Link To It Is Busy Building A Tower of Basabe(l) 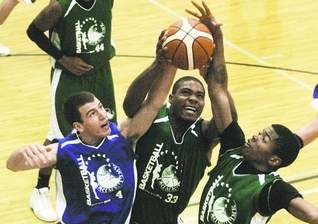 Just look at that defensive intensity in the background there.

WOO-HOO, BIG TEN PLAYER OF THE YEAR, BABY.  Melsahn Basabe, the former Siena recruit who followed the Franda Bear from the East Coast to the rolling cornfields of Iowa, made his official-ish debut two nights ago in the Prime Time League.  He was, in a word, spectacular.

Basabe gave Iowa fans reason to be optimistic about the future by scoring 36 points and grabbing nine rebounds in his Prime Time League debut Tuesday at the North Liberty Community Center.

Basabe, who arrived in Iowa nine days ago, completely dominated everyone who tried to guard him. He scored 36 points and grabbed nine rebounds in a losing effort.  He clearly was the power player on the court and impressed everyone who saw it. Incoming senior Jarryd Cole, who’s not playing because of off-season knee surgery, remarked at one point that every time Basabe touches the ball, he scores.

Basabe hit 15 of 20 shots and at one point in the first half he scored on four straight possessions. He opened the game with a thunderous one-handed dunk and even had three assists. He’s a raw talent and needs work when putting the ball on the floor, but for the first time playing in Iowa, he made a great first impression.

And, hey, don't just take their word for it -- Devyn Marble says so, too, and he's clearly an unbiased observer, right?

"Melsahn is a good player," Marble said. "Once he gets stronger, he is going to be a dominant player in the Big Ten."

So, really, does this mean anything at all in terms of what kind of success Basabe may have next fall?  Of course not.  J.R. Angle probably averaged a double-double in the PTL.  Chris Kingsbury could have gone for 50+ a game while finishing off a six-pack of tallboys in the PTL.  It's a defense-free league, where dudes run and shoot and do little else.  But hey, it's June, the news is slow, and WOO WE HAVE THE BASAVIOR NOW.

"The weather is a little strange. It rains and then two seconds later it's sunny. One thing I was impressed with is the people are nice, even you guys interviewing me. The East Coast is kind of different."

Unpredictable weather, check.  Nice people, check.  If he'd just worked in something about how it wasn't all cornfields, he would've gotten a hat trick.  Maybe next time, Melsahn!

So long, and thanks for all the wins.  She doesn't get mentioned in the same breath as Evy or Gable or Fry or even Stringer because she coached in the decidedly unglamorous world of softball, but Gail Blevins was as big a winner as any of them (sans Gable and his ridiculous haul of national championships, perhaps).  Thursday she announced that she's hanging up her visor.  She leaves on the heels of one of her more disappointing seasons and one that saw rumors of internal dissent, but none of that should obscure the fact she was a tremendous winner at Iowa.  Her list of accomplishments is staggering:

Blevins never had a losing season in her 31-year career. During her time in Iowa City, Blevins guided Iowa to 40 or more wins 13 times, including three seasons with 50-plus victories. Under her direction, the Hawkeyes finished in the top three in the Big Ten every year but five from 1989-2010 and her Iowa teams never finished lower than fifth in the conference.

It's "only" softball, but success on that level is certainly worthy of recognition.  Farewell, Coach -- you'll be hard to replace.

"What are you going to do tonight, Brent?"  "The same thing I do every night, BHGP: try to take over the world."  Brent Metcalf, blog crush and former Iowa wrestler extraordinaire, continued his winning ways, by picking up a controversial win over former Badger Sooner (and former Iowa strength-and-conditioning coach) Jared Frayer in the World Team Trials, locking up a spot for Metcalf on the U.S. team that heads to the World Championships in Russia in September. Metcalf won with a rare defensive point in the final period.

But it was Metcalf's stinginess that made the 23-year-old the youngest member of the U.S. freestyle team and denied Frayer, 31, of his first trip to the World Championships. Both wrestlers were cautioned for moving early in the leg clinch. On the third and final attempt, Metcalf broke the grip Frayer had around his right leg with a quick reaction off the start. Frayer's corner protested that it was an improper start, but the call was upheld.

Of course, the matter isn't quite settled yet.  Frayer is appealing the decision.  We hope that the arbitrator reaches a fair and just decision... and that Metcalf heads to Russia to kick some ass.

In other wrestling news, former Cyclone Kurt Backes has seen the light and decided to fight alongside the good guys, taking Mike Zadick's coaching spot (Zadick is moving up on the staff to replace Doug Schwab , who's off to resurrect the UNI program) on the Iowa staff.  As an upper-weight guy, Backes should be a useful addition to a coaching staff that was well-stocked in championship-caliber lower-weight guys but a bit lacking when it came to the upper weights.