Share All sharing options for: It's Not Plagiarism If You Link To It Takes a Stroll Down Evy Street

Just a reminder: INPIYL2I is the BHGP daily roundup of vaguely Iowa-ish news.  Tips can go to hawkeyestatebhgp@gmail.com. 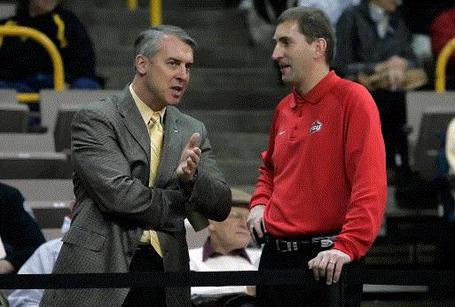 Enter Cirroc.  Scott Dochterman, master of the FOIA action, has put his legal department to good use and obtained a copy of the Iowa-ISU football contract, entered into by Bloodpunch and The Inconsolable One two years ago.  It boilerplate legalese for the most part: Each team has the right to broadcast the game pursuant to its own conference's television deal, each team has to provide a radio booth for the other, "whereas" makes an appearance here and there, etc.

The interesting stuff, however, is in paragraph 13 on page 3:

Notwithstanding the terms set forth in paragraph 11 above, during this contract, should either school's conference add additional conference football games, that school shall be entitled to request that the parties seek to renegotiate the contract terms for the remaining contract years that are affected by the conference scheduling change.  Both schools agree to make every effort to work with their respective conferences to keep this issue from arising.

Unfrozen Caveman Lawyer would like to point out that both teams are now in breach of contract; if both schools were required to "make every effort" to prevent their respective conferences from adding games, Iowa would be contractually required to oppose any expansion plan that would add a conference championship game, and Iowa State would have to oppose any Big 12 salvage operation that would add a ninth conference game (as is widely rumored).  This is actually hideous contract drafting, as there's no indication whether Iowa or ISU is required to raise any issues now or can save them for later.  The argument can certainly be made that either team can now walk away from this contract at any time.  Guess which team is more likely to exercise its rights.

Signs of Spring (And, by Spring, I Mean Gambling Season).  The Golden Nugget (the finest sports book located next to a Binion's Horseshoe in all of Nevada!) has published early lines on every game of even modest consequence (T/F/J to our pals at Tomahawk Nation).  The bookies know what they're doing, and they have Iowa finishing 11-1.  The Hawkeyes are favored over Iowa State (-14), Arizona (-2.5), Penn State (-3), Michigan (-3), Wisconsin (-3), Michigan State (-7.5), and Minnesota (-9, which is basically a gift to you), and are only a four-point underdog to Ohio State.  Should the season actually end that way, I think we'd all be OK.

To Forest (This Time, from the University of Iowa).  We've made no secret of the fact that we love Forest Evashevski, former Iowa head football coach and athletic director, winner of Rose Bowls, conquerer of the Fainting Irish, wearer of fur.  Evy, who died last year at the age of 91, is neglected and misunderstood by modern fans; we all talk about Hayden Fry and Kirk Ferentz, but there is no doubt who is the greatest coach in the program's history.  That's why this move is long overdue:

An Iowa City street near Kinnick Stadium will be renamed in honor of the contributions made by Forest Evashevski, the Hawkeye football coach from 1952-60.

The street begins at the Hawkins Drive intersection near the northeast corner of Kinnick Stadium, bends around the north and west grandstands of Kinnick Stadium and the adjacent parking lot, and ends when the street intersects with Melrose Avenue immediately west of the Krause Family Plaza.

It is painfully obvious why Evashevski has been overlooked by the athletics department: his tenure as athletic director was an unmitigated disaster, as he meddled in the football program and mishandled the Black Boycott.  With that said, his record has a head coach is without peer, and the story of his life is phenomenal.  It's a shame it took his death for the University to recognize his contribution, but better late than never.

KWIKHITZ:  In the wake of Doug Schwab's departure for the Mediterranean climate of Cedar Falls, former Iowa wrestler and veteran bench coach Mike Zadick has been named interim assistant by Tom Brands.  Ross will have to chime in on what that might mean, because I'm still over here watching WWE Monday Night Raw.  Former Steve Alford assistant (and, interestingly enough, former Sherman Dillard assistant) Greg Lansing has been named as Kevin McKenna's replacement at Indiana State (also in that story, the news that Lickliter assistant Lavall Jordan has joined the Michigan staff).  It's an Iowa-centric day on BTN; be sure to catch the 1953 football yearbook premiere at 7:30 CST, because you want to see the Fainting Irish far more than some stupid Obama speech.  And EA Sports is killing the productivity of the American workforce.