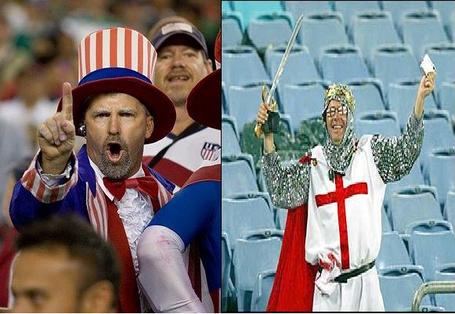 Finally.  Six months after the "randomized" FIFA draw spat out one of the most tantalizing match-ups possible for the plucky U.S. national team, that match is finally here: USA v. England.  Sixty years ago, the Americans pulled off one of the all-time great upsets in World Cup history against the English.  A win today wouldn't be quite as shocking, given the improvement in the U.S. team over the years, but it would still be a major upset.  England has the edge in history (they invented the game, after all), the pedigree (the English are basically better at every position aside from goalkeeper), and the coaching (Fabio Capello's been a massive winner at virtually every level of his career).

So why does the United States maybe kinda sorta have a chance?  They thrive as underdogs (see: last year's stunning run to the Confederations Cup final), they have attacking players in very good form (Landon Donovan and Clint Dempsey), and they have the better keeper (England would kill for Tim Howard).  And if you're looking for goals, there's reason to think this match could deliver. England will likely be playing a back line that's never started a game together before, and the U.S. is dealing with fitness issues for its best defender (Oguchi Onyewu) and suspect form from other defenders (hint: if Jonathan Spector sees the field, be very afraid).