Share All sharing options for: It's Not Plagiarism If You Link To It Is Talking Everything But Expansion

Programming note: Head on over yonder if you want to partake in various pick 'em and fantasy-related World Cup enterprises with the BHGP faithful.

First he was a godfather, now he's a playboy... What next for our favorite dreadlock'd terrormonster, Adrian Clayborn?  Playboy named Clayborn to their preseason All-America team, making him the 16th Iowa player to earn that distinction and the 5th player under KF.  Morehouse has the full list of honorees (see above link) and it's basically a who's who of past Hawkeye greats, although Chuck Long and Bob Sanders are two notable absentees.  As part of the honor, Clayborn gets to go to the Playboy Mansion and party -- WAIT, that's not part of the deal any more?  (H/T to Rittenberg.)  Well fuck that.  We're switching our allegiances to Juggs now, dammit.

Should I stay or should I go?  The MLB First-Year Player Draft took place over the last few days (somehow they managed to squeeze it in around Strasmas) and while there much hootin' and hollerin' about the Nats drafting uber-recruit (and apparent Ultimate Warrior fan) Bryce Harper with the first pick, it was picks much deeper in the draft that could have an impact on the 2011 Iowa baseball team.  The Reds drafted CF Kurtis Muller in the 22nd round, with the 667th overall pick, and from the sounds of things, Muller's ready to say sayonara to Iowa City:

Muller might be wearing the full uniform of a Reds minor league affiliate before long. He could return in the fall for his senior season, but Muller sounded Tuesday like professional baseball is his first priority.

"We'll see what happens," he said. "But I think I'm ready to start my professional career."

How much of a blow would Muller's departure be?  Well...

Ouch. Selfishly, we'd love to see Muller stick around and try to lead Iowa baseball to something greater than the shock runner-up finish at the Big Ten Baseball Tournament they achieved this year, but if Muller's ready to move on (and the money's right), c'est la vie.  If someone had offered our 20-year old self a check with a decent amount of zeroes on the end and a chance to play professional baseball for a living, we wouldn't say "no," either.

Brent Metcalf will beat you with the power of his mind, too. 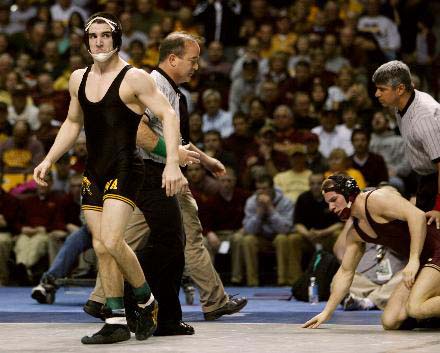 Brent Metcalf is dismissive of your brainpower and your athletic prowess.  Pussy.

Former University of Iowa wrestler Brent Metcalf has one more all-America honor to add to his collegiate collection after being named to the ESPN The Magazine at-large [academic] all-America first team Tuesday.

Metcalf is the first Hawkeye wrestler since Tyler Nixt (2004) to earn a spot on the first team, and only the second wrestler in school history to earn the national honor.

Metcalf is one of two wrestlers and one of two competitors from the Big Ten Conference named to the national 15-man academic squad. Harvard's J.P. O'Connor was the other wrestler, while Ohio State swimmer Stefan Sigrist was the other Big Ten student-athlete. The rest of the team was comprised of four swimmers, two ice hockey players, two lacrosse players, one tennis player, one skier, one hockey player and one fencer.

Congrats, Brent.  We're still kinda sorta in denial about the fact that we won't get to watch you tear limbs apart on Big Ten mats next winter, but yeah: we'll miss ya.

APR is A-OK (mostly).  They aren't exactly setting the classroom afire as a group, but the football team's APR is just fine, thank you. The score for the most recent year on record (2008-2009) was actually higher (952) than the program's overall score (945), which is still suffering slightly from the ill effects of the attrition-heavy period from 2005-2007.  The nature of the Iowa program, which has to take on a great number of players from out of state and some moderate academic risks, will probably prevent it from ever having truly elite APR scores, but they can certainly be better than they have been.  But, for now, it's a non-issue: the football program is in no danger of losing scholarships.

On the other hand, the basketball team's APR rate was (unsurprisingly) every bit as ugly (915) as the win-loss record and on-court action a year ago.  Their overall score (948) is still fine, but the attrition-heavy Lickliter years are going to be a lead weight on Iowa's rate for the forseeable future.  McCaffery really needs to block that revolving door or the possibility of Iowa basketball losing scholarships (and making his rebuilding job even more crushingly difficult) could move from fanciful dream to actual possibility.

You cannot stop him; you cannot even hope to contain him -- unless you have a wagon full of Twinkies.  The Prime Time League held their annual draft last night and to the shock of no one an Iowa player was drafted first. What might have been shocking was the identity of said first pick: the The Dessert Fox himself, Brennan Cougill.  Yes, really.  The dearth of good big men was cited as the main reason for the Cougillsaurus being the number one pick, but we know the real reason: dinosaurs are unstoppable in the low post.