It's Not Plagiarism If You Link To It Operates On A 2.7 Percent Margin

Share All sharing options for: It's Not Plagiarism If You Link To It Operates On A 2.7 Percent Margin

Programming note: you'll want to click through to the end, because the Tracy Morgan part blows all of this out of the water. We're not kidding.

So what do you suppose Iowa actually cleared from the game itself, which sent just under $2 million to the school? $1 million in profit or so? Maybe "only" a few hundred thousand dollars, since Iowa didn't sell all the tickets* or anything?

Iowa’s total expense for the trip was $1.895 million. Expenses included $1.35 million for the athletic department, $457,307 for the marching band and $83,119 for the institutional party, which includes UI leadership and others.

UI did not provide details about how many people UI brought on the trip. In December, UI officials said they expected a party of 600 to 650 people.

Now, $50 thou profit is still a profit, and when it comes to bowl games with teams guaranteeing ticket sales, bowl profits are no sure thing these days. Sucks, but it's the reality of the situation.

But look: suppose Iowa's postseason fate were the same as their poorer brothers to the west (or, we suppose, the north), and they were consigned to the Insight Bowl, which pays out less than half per participant** than what the Orange Bowl provides  So if Iowa has to fly to Phoenix instead of Miami and gets half the budget to do so, do they end up $1 million in the red when it's all said and done?

Of course they don't; Iowa would have adjusted their budgets and schedules, and just perhaps not have given the players a multiple-week-long vacation to the bowl destination in order to meet said budget. Would it have mattered terribly to Ferentz and the team if their preparation were in the bubble instead of Miami? If so, would that mattering have been worth a million dollars? Are you certain? And if you're not certain, can you think of a better use of said million dollars in the middle of a recession?

You stay out of our hallowed, ambiguous halls, rookie!: A.J. Edds was assigned #54 upon his arrival to the Dolphins. That was Zach Thomas' number, and apparently, people give a shit about that so much that Edds was re-assigned his Iowa number of #49.

Iowa at Michigan, 2:30, ABC. God, it just feels right, doesn't it? Seriously, not a thing I'd change about this game. Go get 'em, Hawkeyes.

Austin Blythe is one very big kid. We covered Blythe's recruitment yesterday, but every now and then you see a picture that says "holy jesus this kid needs to GWTP." This would qualify. At the very least, we know why Stanford and Wisconsin offered, and why Iowa may hang its hat on landing Mr. Blythe. 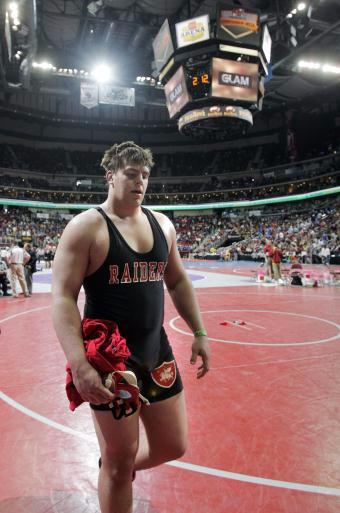 Vin Scully remembers Ernie Harwell. Hell of a story, honestly. It's not sappy at all, but it's exactly what you'd expect from Vin Scully. Which is to say, if you're not at least a little emotional after it's all said and done, we don't want to know you.

And finally, maybe the best 20 minutes of comedy ever. Tracy Morgan visits a sports talk radio show about two years ago, and all hell breaks loose. It's so fantastic.

*Because trying to sell college football tickets for a neutral-site game during a weeknight after the New Year's weekend is just a fantastic idea.
**The Orange Bowl actually pays out about 15 times what the Insight Bowl pays, but y'know... sharing is caring.