Share All sharing options for: It's Not Plagiarism If You Link To It Drops Out of the Race

The Other Shoe Drops.  As we speculated last week, it appears as if Iowa is no longer in the Ben Brust sweepstakes.  Per Pat Harty's blog, which credits ESPN Insider:

Brust reportedly will decide between Wisconsin and Northwestern.

Brust's decision comes as no surprise; if he wasn't overwhelmingly interested in leaving Iowa behind and playing for the Badgers, he wouldn't have directed the Wisconsin athletic department to appeal his initial waiver denial on his behalf.  Northwestern is local, and so likely will stay in the mix until the bitter end, but Brust is as good as a Badger now.

What is surprising to me is the fact that a lightly-recruited player would consider signing a letter of intent before the spring signing period.  On June 30 of last year, Brust held offers from Iowa, Northwestern, and Butler; nine months and one decommitment later, he's holding a scholarship from Wisconsin and approximately 25 other schools.  Cody Larson was mulling over offers from the likes of Nebraska and New Mexico; now he's playing for a program that recently won back-to-back national championships.  Melsahn Besabe picked up spring offers from the Big Ten and Big East that weren't there when he originally accepted an offer from Siena (to be fair, he likely wouldn't be on Iowa's radar had he not originally committed to McCaffery).  Mid-level recruits are apparently in much greater demand and have much more leverage when they wait.

The Most Inevitable Thing Ever.  The logical evolution of the "Don't taze me, bro" meme has gathered steam.  From The Daily What (of course): 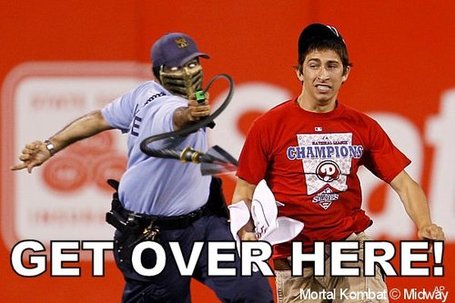 Even more unsurprising is the college affiliation of the tazee.  Per BSD, he's a soon-to-be Nittany Lion:

"He wasn't drinking. He was not on drugs," said the father of the teen Tasered by police in the outfield at Citizens Bank Park last night.

Steve Consalvi, 17, is a senior at Boyertown High and "a real good student, heading to Penn State," according to his father, Wayne, 45, who owns Consalvi Auto Repair in Pottstown.

Steve even called from the park last night, asking for permission to run on the field, as the Phillies hosted the St. Louis Cardinals, the elder Consalvi said.

You see, he wasn't drinking or on drugs.  He was just hanging out in the outfield, nodding his head like yeah, moving his hips like yeah, and decided it was time for this party to move onto the field.  No big deal.  RUTS is worried he may have his admission offer revoked; if I had Penn State's depth chart, I'd be offering him a scholarship and a shot at quarterback.

The Prodigal Guard.  While many Iowa basketball fans are worried over the transfers and decommitments that have come with the new McCaffery regime, Frantasy Island was widely praised for his decision to offer an assistant coaching position to Kirk Speraw, former Iowa guard and former head coach at Central Florida.  Speraw, who was ousted this March after 17 seasons, 279 wins, and 4 NCAA berths with the Knights, had his day with the media yesterday.  The Miami Herald (reporting the UCF angle, of course) has Speraw sympathizing with Coach Lickliter and talking line another Kirk we all know and love: "We've got to do what we can to make the players in the program reach their potential, individually and collectively. You've got to coach them hard, you've got to teach them hard."  And Dochterman has a run-down of Speraw's first week on the staff, punctuated by a visit with incoming recruit Zach McCabe and an appearance at the Sioux City I-Club.

Miscellany:  11W ranks the Big Ten quarterbacks.  The fact that Ricky Stanzi is #1 speaks volumes for the Ohio State fanbase's faith in Terrelle Pryor and the state of Big Ten quarterbacking in general.  SI's Andy Staples ranks Iowa #5 nationally in the aftermath of spring practice.  Darius Stokes, son of Iowa third-ranked all-time leading scorer Greg Stokes, will walk on this year; Stokes averaged 5 points and 3 boards last year at Linn-Mar, so clearly he's a project.  And OMG WE DESERVE A CHANCE AT THE NATIONAL TITLE plays Iowa in the NCAA women's tennis tournament, thereby forcing me to care about women's collegiate tennis for the first time in my life due solely to my hatred for Boise State.