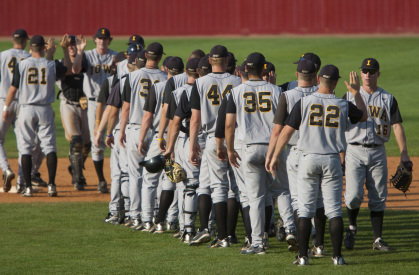 The Iowa baseball team rode a wildly improbable wave of success all the way into Saturday night's Big Ten Tournament Championship Series... and then abruptly stopped, as the Hawkeye baseballers were mangled by Minnesota, 15-5.  Minnesota, the Big Ten regular season champ as well, continued their success over Iowa in roundball sports (their hoopsters destroyed the Iowa men this winter and took 2/3 from Iowa baseball in the regular season); efforts by Iowa to play with a more oblong ball -- or, failing that, to just send Adrian Clayborn, Broderick Binns, and Tyler Sash out to wreck the Gophers' shit -- were denied by the fun-hating jerks that run the Big Ten.

A seemingly exhausted Iowa team ran out of good pitching, good fielding, and decent hitting; they fell behind 6-0 earlyand were never able to mount a rally against a rested (and, to be fair, more talented) Minnesota team.  Gopher pitcher Phil Isaakson went 7 1/3 innings, holding Iowa to just five hits and one run.  OF Kurtis Muller was probably the man of the match for Iowa, such as it was; he went 2/4 with a double, a run scored, and an RBI.  That was about as good as it got for Iowa last evening.

Mind you, there was one more bright spot in Iowa's crazy Big Ten Tournament run -- they avenged Thursday's 15-4 shit-kicking from Michigan with a thrilling, come-from-behind 11-8 win in an elimination game Saturday afternoon. Iowa spotted the Wolverines an 8-1 lead but took advantage of a rapidly imploding Michigan team to pick up ten runs in the sixth, seventh, and eighth innings.  Such is the nature of pitching in the Big Ten, though: few teams have much in the way of quality depth, so when things go bad they often go really bad.  Iowa's comeback was also aided by Michigan's defense also deciding to vomit all over themselves (three errors).  But hey: we'll take any excuse to rub it in a little against Michigan fans.  SS Kurt Lee was the unquestioned man of the match in that game; he went 5/5 with a double, three runs scored, and three RBI.  Props also to BHGP's favorite Iowa baseballer, the exquisitely named Zach McCool, who went 2/4 with a run scored and two RBI.

Even if Iowa had vanquished the insidious Gopher menace Saturday night, they would have needed to do soagain on Sunday afternoon, thanks to the Big Ten Tournament's wacky double-elimination stips.  With the loss, their season is effectively over -- at 30-28 overall and in a weak conference for baseball, Iowa has zero hope of getting an at-large bid to the NCAA Tournament.  Even so, this was one of the most successful seasons in Iowa baseball history in the past thirty years; the second-place finish in the BTT was the best in school history since 1983 (another second-place finish).

The core of this team is quite young, too, so if the draft-eligible underclassmen can resist the siren song of MLB signing bonuses in the hundreds of dollars and road trips through such exotic destinations as Bluefield, WV and Great Falls, MT and coach Jack Dahm can increase the depth of the squad with quality recruits (and there's been some muttering that recruiting is on the upswing), success like this may not be such a once-every-thirty-years phenomenon.  But, regardless of what comes to pass in the future, we tip our caps and offer a drink in salute of this year's Iowa baseball team -- left for dead earlier in April, they went on an unreal tear in May, winning eleven of their final fourteen games and getting a pair of games away from the NCAA Tournament.  Good show, gents.