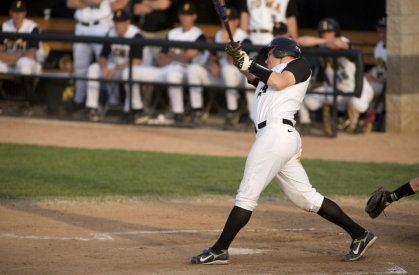 Yes, more of this, please.

So, yeaaaah, that happened on Thursday.  18-4.  Yeesh.  Not much to say about that one, really -- bad defense met worse pitching, Michigan had a field day, and evil triumphed.  What is there to say, really?  Iowa played like shit and got absolutely murderized.  Michigan played well and dished out the fatalities. End of.

But our story does not end there.  Oh no.  Since the Big Ten Tournament is a magical land of double-eliminations (and in which overall run differential is an irrelevant stat, thank god), Iowa cashed in their second and final life and continued play on Friday, running into their old friends the Purdue Boilermakers in the consolation bracket.  The Boilermakers beat Indiana 15-5 earlier in the day but for the fifth straight time this season Iowa proved to be their kryptonite, beating them 8-3 and bouncing them from the tournament.  A day after getting buried under an early barrage from Michigan, Iowa returned the favor to Purdue, jumping out to a 7-0 lead in the top of the first and never looking back.  Iowa used five hits and some utterly wretched pitching from Purdue (with the bases loaded, two consecutive Hawkeyes got hit by pitches, scoring two runs; they tacked on another run with a wild pitch later in the inning).  Purdue made two pitching changes in the first inning alone.

A seven-run first was more than enough for the man of the match, freshman pitcher Matt Dermody.  Dermody went six innings and gave up eight hits, but only two runs and tacked on a pair of strikeouts for good measure. Solid work from a true freshman.  On the batting side of things, Iowa was paced by Tyson Blaser (2/4, RBI, run scored) and Mike McQuillan (1/3, 2 RBI, run scored).

As a result, Iowa lives to fight another day and the improbable dream of an NCAA Tournament berth remains alive. That's the good news.  The bad news?  Their prize for knocking off Purdue yet again is a rematch with Michigan at 2:35pm CDT on Saturday (BTN) in an elimination game.  The winner of that game moves on to the Championship Series and will have to beat Minnesota twice to advance to the NCAA Tournament.  But let's not get ahead of ourselves here.  The immediate obstacle is Michigan.  It's unlikely things will go as poorly as they did in Thursday's game against Michigan, but as the MGoBlog preview notes, it's not like Iowa has a lot of options when it comes to pitching.  They either have to throw out a starter on 2-3 days rest or go with someone deep in the rotation who lacks experience.  On paper, Michigan should win again, probably quite comfortably.  But on paper Iowa was never supposed to make it this far anyway, so pray for more chaos -- it's probably Iowa's best bet for extending this madcap season one more game.