Share All sharing options for: It's Not Plagiarism If You Link To It Is Not Arguing Balls And Strikes 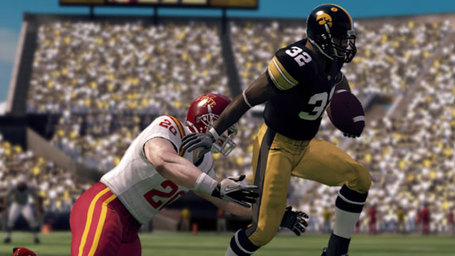 Even EA knows Iowa State can't tackle.  The ANF sticker is a nice touch, too.

We're talkin' stickball.  The no-longer-mythical Iowa baseball team continued their improbable run of success by tallying their fourth straight win over Purdue, this time in the first round of the Big Ten Tournament.  The 7-4 win was also their ninth in their last ten games and, most remarkably, their first win in the Big Ten Tournament since 1990.  We're more than happy to jump on the bandwagon and wish the baseballers continued success.  Hell, we're still marveling over the fact that the same team that got piss-pounded 42-13 in a doubleheader with Michigan State is now just three wins away from a spot in the NCAA Tournament.  And, oh yeah, Sparty's sitting at home.  Big Ten baseball: it's a little nutty.

Iowa spotted the Boilermakers an early 4-0 lead, but ace Jarred Hippen settled down to go 7 1/3, giving up just four runs on ten hits, with five strikeouts and no walks.  The Hawkeye offense exploded for four runs in the bottom of the fifth to tie it up, then scored the winning trio of runs in the sixth inning.  Trevor Willis and Ryan Durant led the way on offense with a pair of 2/4 outings; Zach McCool also chipped in with a 1/4 showing and two RBI.  We'd also like to give a terrorist fist jab to Purdue coach Doug Schreiber, for his baffling decision to save his star pitcher, Matt Bischoff, for the second round game rather than pitching him against Iowa.  Thanks, Doug!

Next up for the triumphant Hawkeye baseballers?  Good ol' Big Blue, fresh off a first-round bye.  Iowa took two of three from Michigan in their lone regular season series, winning both games in a Saturday doubleheader before coming up short in the Sunday finale.  MGoBlog has a very thorough preview up -- go read that.  We're not going to even pretend to be able to do a preview as good as that.  Just substitute "Iowa wins because GO IOWA AWESOME" in the Prediction section and you're good to go.  Game's at 2:35pm CDT today on BTN.

We're still talkin' stickball.  The Iowa baseball team also made a little noise on the All-Big Ten teams after their surprisingly successful season.  OF Kurtis Muller and SP Jarred Hippen were Second Team selections, while 3B Zach McCool made the Third Team and DH Mike Corbiel made the All-Freshman Team.  Kudos all around.

Finally, Andy Hamilton conducted a nice Q&A with baseball coach Jack Dahm, touching on multiple issues, including his vision for the program, what they need to be successful (consistent pitching), and why northern/midwestern teams struggle so much in baseball.

Q: You’ve been here seven years now and you’ve been to the conference tournament three times. What is the program capable of doing?
JD: I feel like we should be in the Big Ten Tournament on a yearly basis. That’s a realistic goal for us. It’s very hard. You look at the Big Ten this year and two of the best teams in the league are Ohio State and Michigan State and they’re at home. This league is so competitive up and down. We want to be able to compete for the Big Ten Tournament every year, but also compete for championships. I think we’re capable of that.

CHEAT FIGHT TWO-WEEK VACATION.  On the heels of the revelation that Minnesota self-reported violations involving the recruitment of uber-recruit Seantrel Henderson comes the news that Gopher recruiting coordinator Dan Berezowitz is taking an unplanned two-week vacation suspended.  So just what did Berezowitz do to run afoul of the NCAA's draconian recruiting regulations?  Joe Schad sez:

According to the report, Henderson watched a personalized video and powerpoint presentation on an unofficial visit in January. The report also suggests Henderson was shown cardboard cutout likenesses of grade school children wearing Minnesota jerseys.

Really, the issue is not that Minnesota was dumb enough to get caught... the issue is that their cheating was so fucking lame.  Powerpoint?  Cardboard cutouts?  In the war that is high-end recruiting, USC's rolling out the smart bombs and Minnesota's bringing out spitballs.

We can haz November night games after all?  Remember that talking point about how Big Ten rules forbid any night games after October 31st (unless it's played indoors, which is how Iowa got away with throttling Minnesota during the evening hours in 2008)?  As it happens, that's not so true:

A contractual provision exists between the Big Ten and its TV partners regarding prime-time games played after Nov. 1. Unless all parties are on board and sign off early in the process -- the prime-time schedule is usually finalized between early March and mid April -- a November night game likely won't happen.

Sources said there was some talk about having the Ohio State-Penn State game at night last year, but the details weren't finalized in time and the game kicked off at 3:30 p.m. ET.

So you could have a November night game involving Big Ten teams... you just need to get everyone involved to sign off on it months in advance of the actual game.  Despite the exposure night games bring, BXI schools pretty much hate night games since they're a logistical headache -- and way more expensive than a traditional non-evening game.  In other words, don't hold your breath waiting for a sudden influx of BXI night games in November. 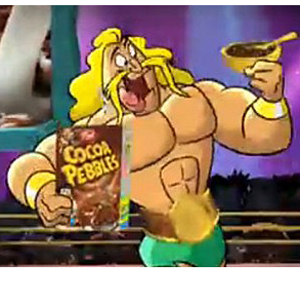 Copyright infringement?  Or is Hulk just jealous because "Hulk Boulder" doesn't look like an orange mongoloid?