Share All sharing options for: It's Not Plagiarism If You Link To It Is Celebrating A Very Important Birthday

The young man from Portland, Oregon! Before we go any further, we have to wish a happy birthday to a great man and one of the reasons this blog even exists... Brent Musberger. The dulcet-toned verbal sexsmith of the broadcast booth turns 62 71 today, and for our money, he doesn't look a day over, uh, 62 71.  Speaking personally, over the last eight years or so, I've come completely around on Musberger. The man's living the life, and he's making sure you know it.

We're gonna win everything for sure! Phil Steele released his All-Big Ten teams earlier this week, and Iowa placed nine Hawkeyes in the first three teams.

Um, make that nine Hawkeyes on defense alone; only putative starters Micah Hyde and Tyler Nielsen (more on him later) were left off the list. On offense, six more Hawkeyes showed up in Steele's ratings. All told, Riley Reiff, Adrian Clayborn, Tyler Sash, and Ryan Donahue were named to his first-team list. Full list here (and here for hot sexy non-PDF action).

Let's read too much into a few minutes of footage! After new walk-on point guard Steven McCarty put his highlights online, cousin Devyn Marble (or is he back to Roy Jr.? I honestly don't know anymore) tweeted his own a couple days ago. Enjoy.

First impressions? Well, he certainly plays like someone who knows he's the biggest, most athletic guy on the court. He's good at using his body to shield his defender from the ball--something that can probably carry over adequately against most two-guards Marble will face--but that leads to some awkward angles to the basket. And Marble's shooting form is unorthodox enough to begin with. Of course, every attempt we'll see on a highlight reel will go in, and if that's something Marble can do at the next level, so much the better; it's nice to have a guy who can score from anywhere inside 25 feet--including facing any direction inside 15 feet.

One thing Marble certainly is not, is a point guard; while he may be working on improving those skills before he gets to Iowa City, he'll need to just to be a 2-man at this level in the first place. It's not like he's Teen Wolf or anything--he keeps the dribble low, at least--but Marble seems much better suited to taking the ball off a screen than bringing it up the floor and making something happen on his own.

Oh great. Now what the hell am I supposed to do all morning, drink? Iowa-ISU has just been announced as a 2:30 kickoff. That makes four confirmed PM games; the week after is our 9:35 kickoff at Arizona, then the first two games of October are the 7:05 tilt against PSU and the 2:35 game at the Mausoleum Big House.

The Waterloo Courier's Kelly Beaton has a quick interview with Fred Hoiberg. Nothing ground-breaking, but he doesn't seem like a guy who's in way over his head.

A former Cincinnati Bearcat seems convinced that Ohio State is conspiring to keep Cincinnati out of the Big Ten.Pretty sure that's not OSU's doing, pal.

Marc Morehouse profiles Tyler Nielsen in today's installment of the Ten Rookies To Watch or whatever the hell he calls that. We looked at the top picture of the article and marveled how much Nielsen resembled Edds. Then we realized that the picture was of Edds, and Nielsen was in the background. In related news, we are dumb.

MGoBrian wants heads to roll after wading through the paperwork involved in Michigan's NCAA violations.

And finally, I'm sorry, but I asked for extra bacon. 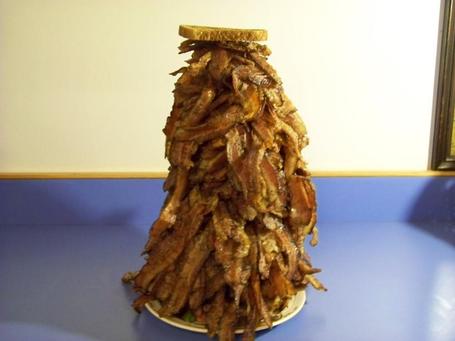