Share All sharing options for: It's Not Plagiarism If You Link to It Spins JUCO Transfers Into Gold

Geography Fail.  From This Is the Internet, WGN: You're doing it wrong. 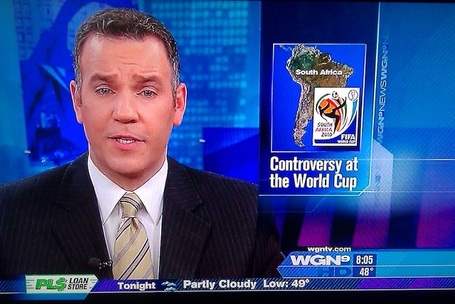 Is that suit an Armani?

Everyone's Got a Price.  /Sinister Laugh.*  A year ago, when Big Ten expansion was just a glint in Jim Delany's eye, former SBN Ohio State blog We Will Always Have Tempe took up the potential BXI expansion candidacy of Nebraska.  As a former western Iowan, the Huskers have always been one of my personal favorites should expansion occur, but there were myriad reasons why it was never going to happen: NU's academics and research facilities are average, Tom Osborne seemed like the last man on earth who would leave the old Big 8 in the dust, and the fans generally hated it.

One year later, Nebraska is on the hypothetical Big Ten short list, and at least the fans are getting on board:

Pagel had an interesting question for Bushnell: Would the Big Ten be a letdown for Husker fans, after so many loyalties with the old Big Eight foes?

"Letdown? No,’’ Bushnell said. "But it will be tough to get used to. It will be like starting over for a lot of fans, having to learn new teams and towns.’’

"I feel sorry for Nebraska fans, a little,’’ Pagel said. "I don’t know if I would want to go into the Big 12, having to start over. Like, every other year, we go to Minnesota for the game. We have a routine, bars we go to, hotel we stay at. That’s part of the tradition.’’

"Well,’’ Bushnell said, "It’s a better time to do it now than it would have been 15 years ago, when we had tunnel vision for the Big Eight. The feeling isn’t the same for the Big 12.’’

Everyone at the table seemed to agree that the Big Ten would be a good fit for Nebraska. "Perfect match, especially with Bo Pelini, an old Big Ten guy,’’ Pagel said. "The style of football Nebraska is playing fits the Big Ten to a T. Everyone wants to say the Big Ten is big and slow. But that’s not true on defense. There’s a new breed of defense, they’re big and fast. That’s what Nebraska is going to.’’

"It’s a great fit, because Nebraskans are like Iowans and a lot of Big Ten fans,’’ Halverson said. "They’re blue collar, hard-working and they have a big passion for their teams. Great people.’’

This sentiment is likely shared by Missouri and Kansas, which does not bode well for the Big XII; with ties effectively cut to the Oklahoma schools through divisional alignment -- the annual OU/NU showdown has been effectively replaced by the Red River Shootout over the last 15 years -- no real academic alliance within the conference, and money slowly floating south, there's little holding these schools in place other than fan loyalty.  When those fans understand the windfall that would come with joining the Big Ten, they have no trouble finding new rivals and new points of interest within their potential new conference.  Just look at Corn Nation these past few weeks, where the writers have been profiling every Big Ten team.  They're preparing for an invasion.

They're Not Dead Yet.  They're Feeling Better.  They're Taking a Shovel to the Head.  With Iowa Western guard Anthony Salter opting for the bitter cold of Hawaii over the tropical paradise that is Iowa City in January and the spring signing period at an end, Iowa hoopyball coach Fran McCaffery is still pursuing another guard for 2011.  Yes, there is CoCo Ware, the 6'2" combo guard from East Mississippi Community College, and yes, we're keeping our fingers crossed for obvious reasons.  But the coaches have decided to keep the remaining potential guard recruits secret from everyone, even resident Iowa basketball Rasputin, Van Coleman:

However, Coleman declined to identify the two players on Thursday other than saying one was from Texas, apparently at the request of the Iowa coaches.

"I think they’re investigating a couple of other jucos who haven’t signed, but they said don’t talk about it until we’re ready to bring them in," Coleman said of the Iowa coaches. "They’re like, `hey, we’re into recruiting guys. But people got them coming here before we’ve even got them on campus.’"

Welcome to the fishbowl, Mr. McCaffery.  When you can't even trust your handpicked mole to properly disseminate your information (and let's not kid ourselves here; Coleman might as well get a paycheck from the university for touting every potential recruit to everyone who will listen and smoothing over the screwups by calling them "mutual parting of ways" like Salter rolled out the "It's not you, it's me" routine on McCaffery), you've got a communications problem.  Shutting everything down is not a long-term strategy, as Harty and the pay sites he reads must be fed, but it's probably a good start.

As for the players, grabbing a 6'10" kid who set the Minnesota high school career scoring record is probably a smart move.  We've always had success with big guys from Minnesota.  Good luck with that.

Fourth And Shortz:  Pat Angerer finally bows out of Name of the Year, but oh what a ride it was.  SI.com's Andy Staples, who is a must read (and not just because he said we are "sublimely monikered"), has some words of warning for a 16-team Death Star Big Ten courtesy of the former WAC.  Friend of the Pants RUTS has an Illinois preview at Black Shoe Diaries that is the LOLZ.  And a 75 year old Carl Monday doppelganger wants to walk onto the Tennessee Tech basketball team, but could have some eligibility problems after -- I'm not making this up -- a 1956 incident wherein he covered the Lees Junior College head coach's office with shaving cream and got kicked off the team.  NCAA: You must make this happen.  It's the natural progression of Club Trillion.