The off-season is a long and tiresome trudge, so how can we best get through it?  By looking ahead to next year, of course.  So, in the spirit of forward thinking, we present a team-by-team look at Iowa's 2010 football opponents (with looks at Illinois and Purdue thrown in for good measure so our Big Televen brethren don't feel ignored).  First up: the  Eastern Illinois Sex Panthers.  60% of the time, they lose every time.

In case you missed it... PART ONE. 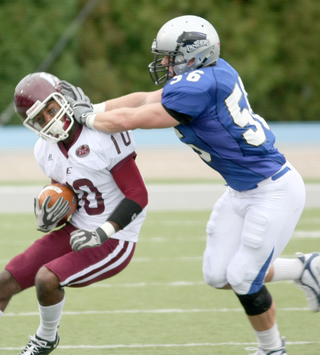 OK, what should we expect when EIU doesn't have the ball?  EIU returns as many (or more; they list strong safety among the returning and departing starters) starters on defense as they do on offense.  Up front, both of their starting defensive ends are back, Colin Luczynski and Perry Burge.  Burge led the team in sacks a year ago (5), although neither were dominant pass-rushers (statistically speaking, at least): combined, they had 11.5 tackles for loss and six sacks.  The loss of both defensive tackles (including Trevor Frericks, who was 1st team All-OVC and led the team with 16 TFL) could be good news for an Iowa team that almost certainly needs to get a solid running game going if they want to turn this into a rout.  With Frericks and his counterpart, Andre Lima, plugging the middle EIU still managed to give up 285 yards and 3 TDs on 36 carries to a Penn State team that featured a turnstile and a banana peel on the offensive line.  Unless their replacements are freakishly impressive, that should be a boon to an Iowa team breaking in a handful of new starters along the line. 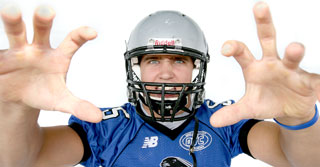 No wonder Cory Leman doesn't have time for patriotic affectations like his brother.  HE'S A GODDAMN BEAR.

Behind them all three linebackers also return, led by the superbly named Nick Nasti (83 tackles, 3.5 TFL, 1 INT).  He's joined by Gordy Kickels (62 tackles, 4.5 TFL, 1.5 sacks) and Cory Leman (63 tackles, 2 TFL, 1 sack).  Leman is indeed the brother of one-half of the Stanzi/Leman '12 ticket; unfortunately, he doesn't display his patriotism as boldly and proudly as his terrorist-battling American hero brother.  In fact, there's reason to believe he isn't even a patriot at all.  Think about it.  Where does he go?  Eastern Illinois.  We all know that if you want freedom, democracy, and apple pie, you turn to the west.  The east offers only godless commies and state-sponsored tyranny.  If Leman had wanted to follow in the star-spangled footsteps of his older brother and stay within the bounds of Illinois, he could've gone to Western Illinois and been a Leatherneck, a nickname they share with none other than the United States Marine Corps.  Instead he headed east and became a Panther, a nickname they shared with none other than the "Soviet Panther" himself, Joseph Stalin.*  But we digress.

* May not actually be entirely true.

The greatest strength of the EIU defense is likely their secondary; both returning cornerbacks were All-OVC.  Rashad Haynes was 2nd team All-OVC and led the team with 11 pass break-ups.  CJ James was 1st team All-OVC and led the team with 5 interceptions, returning two for scores.  If there's a Rick Six thrown on September 4th, James is probably on the other end of it..  The other returning starter in the secondary may or may not be Bobson Mercier at strong safety; of course, they also list Adrian Arrington as a departing starter at strong safety elsewhere, so... yeah.  That said, they amassed most of those stats against OVC competition; against the lone FBS team they played last year (Penn State), they got shredded.  In scarcely more than a half of work, Daryll Clark went 13/19, 234 yds, 3 TD, 1 INT.  Haynes and James are no slouches, but they probably don't see many receivers with the size and athleticism of DJK and McNutt in the OVC.

And just how "special" are their special teams?  Former Iowa kicker Austin Signor is off trying to make the Kansas City Chiefs now, leaving punter Kevin Cook to possibly take over place-kicking duties in addition to his punting duties.  Cook was one of the better punters in the FCS last year, averaging 42.0 yards per punt, placing 14 punts inside the 20-yard line and ranking 9th nationally.  Whether or not he's any good as a kicker is TBD.   WR Lorence Ricks handled handled KR duties last year and did well: 30.6 yards per return and a touchdown.  Iowa struggled with kickoffs last year; hopefully they get those sorted out for this season because there's no need to gift the opposing team good field position.

This ending was incredible.  Let us never see its likes again.

Alright, smartypants, what's gonna happen?  OH NOES!  It's another directional school from the midwest nicknamed the Panthers!  We're doomed!  DOOOOOMED!  Binns and Hunter better strap on their field goal blocking shoes!  Or not.  Look, we all know what happened against UNI last year; it set the tone for a season of heart-stopping games and cast a pall over Iowa's national perception that lingered for weeks (if not months).  Could the same thing happen against EIU?  Technically speaking, sure.  But is it likely?  Let's understand a few things: 2010 EIU is not the same team as 2009 UNI and that game stands out like a sore thumb amongst Iowa's usual results against FCS foes under Ferentz.

* The game wasn't even really as close as the 24-point margin of victory; Iowa was up 38-7 after three quarters.

Hmm, one of those things is not like the other... Average score before last year: Iowa 44, FCS team 10.  And by the relative standard of quality, those weren't even appallingly bad FCS teams.  2005 UNI and 2006 Montana both won their respective conferences and made deep runs in the FCS playoffs.  (2008 Maine and 2009 UNI failed to succeed at that level; they were more like respectably above-average FCS outfits.)  Also: while we're typically loathe to play the "but the other team played well because they wanted it so much more" card (aka the Iowa State card), there actually is some merit in that line of thought when UNI is involved.  They absolutely do have a chip on their shoulder where their big school counterparts are concerned and their play typically reflects that.

Last year's UNI squad also had two things you'd really want in an FCS team if they're going to give an FBS team a scare: a battle-tested and accurate quarterback (Pat Grace) and a highly experienced offensive line (they were loaded with multi-year senior starters).  Last year's EIU team was probably a better comparison for 2009 UNI, since they had an experienced (albeit not experienced with them) signal-caller in JC6 (who, like the UNI kids, would have had a massive chip on his shoulder to fuel his motivation against Iowa) and an offensive line loaded with juniors and seniors.  This year's team will be breaking in new faces along the line and at quarterback.

Additionally, UNI has had some success against FBS schools in the past; they knocked off Iowa State not that long ago.  EIU typically just gets pantsed when they play FBS schools.  Just look at their last ten results:

Aside from that lone win against Eastern Michigan (one of the worst teams in the FBS over the past decade), EIU's track record against FBS schools is pretty consistent: they get beaten down.  Hard.

So what do we expect to happen?  Will Monderboy and Young Nasti-Man team up to cripple Iowa's BCS aspirations before they can even get underway?  Um... no.  Saying that we expect a comfortable win is not exactly going out on a limb.  Whether it reaches the massacre level of previous FCS eviscerations likely depends on the state of the Iowa running game at this early stage of the season.  Iowa was able to rack up some seriously lopsided scorelines in Stanzi's first year as a starter, but that was due in no small part to a mean offensive line that was superb at run blocking... and, yeah, that Shonn Greene kid.  He was pretty good.  That beastly rushing attack freed up Stanzi to kill teams with play-action, which enabled Iowa to roll up big scores on some bad teams in 2008.  As we saw last year, things get a little dicier when more of the offensive load falls on Stanzi alone.  If the offensive line can punish the EIU defensive front and Iowa's Cerberus of a running game gets going, it could easily be a rout; you certainly wouldn't expect EIU to put up too many points on the Iowa defense.  But if the offensive line struggles and the running game is inconsistent, the game could be closer than we'd like for a while.

So how's the rest of their season gonna play out?  Err.  Let's be honest: we can make educated guesses about the other teams on Iowa's schedule because we're far more familiar with them.  In fact, aside from EIU and Ball State Iowa played every other team on their 2010 schedule in 2009.  But we know as much about Ohio Valley Conference football as we do about nuclear fusion, although FUN FACT: prolonged exposure to both can give you radiation poisoning.  Considering that they return so many starters on offense and defense, a finish on par with last year seems plausible unless they just get murdered by poor QB play.