The off-season is a long and tiresome trudge, so how can we best get through it?  By looking ahead to next year, of course.  So, in the spirit of forward thinking, we present a team-by-team look at Iowa's 2010 football opponents (with looks at Illinois and Purdue thrown in for good measure so our Big Televen brethren don't feel ignored).  First up: the  Eastern Illinois Sex Panthers.  60% of the time, they lose every time. 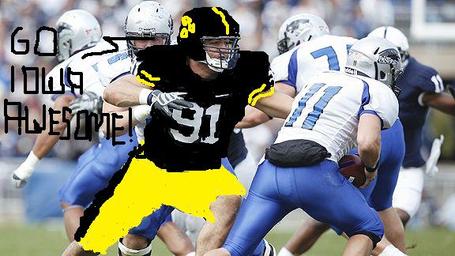 Full disclosure: I learned (almost) everything I know about Eastern Illinois from the erudite observations of Cairo at Black Shoe Diaries.  His account of their history and footballing prowess seemed to have plenty of truthiness.

EASTERN ILLINOIS PANTHERS (@ Iowa City, September 4, 2010)
Where the devil do they play?  Lovely O'Brien Stadium in Charleston, IL, which is totally on the southeastern edge of the Chicago 'burbs according to the displaced Chicagoans that litter Iowa City.

What conference do they call home? The mighty Ohio Valley Conference, home of some of the best sophomorically-monikered schools in all the land, like Austin Peay and Morehead State. 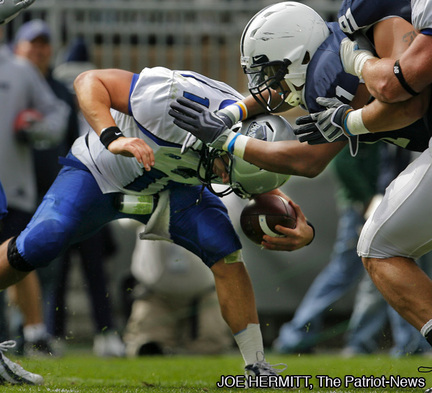 What did they do last year? 6-2 in the OVC, 8-4 overall; their 6-2 league record was enough to grant them the OVC's automatic berth into the I-AA playoffs, thanks to Jacksonville State (6-1 in the league) running afoul of some APR sanctions from the NCAA.  Their stay in the playoffs was short-lived, though; Southern Illinois annihilated them 48-7 in the first round.  Their lone game against big boy competition went even worse: Penn State thrashed them 52-3.

So do they have, like, history with Iowa?  As opponents?  Nope.  But they have served as a home for disgruntled former Iowa players; last year they welcomed the immortal Jake Christensen, displaced from the starting quarterback job at Iowa by the Americanzi, and Austin Signor, the odd man out of the kicker derby two years ago.  Both Christensen and Signor used up the remainder of their eligibility last year, so neither man will be around to receive any verbal abuse from inebriated and embittered Iowa fans.

What's the one things you should know about Eastern Illinois?  It's not that they count Tony Romo, Sean Payton, Brad Childress, Mike Shanahan, Kevin Duckworth, Matt Hughes, Joan Allen, or even John Malkovich among their alumni.  No, it's that Jimmy John Liautaud went to school there and any man who could found such a delicious sandwich kingdom with such wonderfully surreal commercials deserves special recognition.

How many of these fools were around a year ago?  Bob Spoo's charges return seven offensive starters -- everyone but the quarterback, center, and both offensive tackles.  They return even more on defense -- everyone but their free safety and both defensive tackles, including their top three leading tacklers in 2009 and their team leaders in sacks and interceptions.  And they return half of their specialists; Signor is gone, but the punter's back. 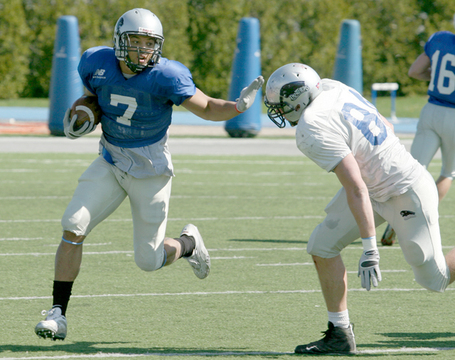 RB "Monderboy" Mon Williams uses the power of his mind to repel opponents.

What should we expect when EIU has the ball?  As noted, the Panthers return the bulk of their offense.  Their top five receivers are all back, although none of them were standouts in 2009.  The EIU passing game was more of a spread-it-around attack than a force-feed-a-few-stars attack; no one on the team caught more than 32 passes (RB Jimmy Potempa; Kenny Whittaker led all WRs with 29 receptions).  No receivers had more than 400 receivingyards but four had more than 300 receiving yards.  Touchdown were also distributed evenly; seven players caught at least two scores, but no one caught more than four.  The Panthers also bring back their top three leading rushers, led by Mon Williams (191 carries, 870 yards, 9 touchdowns), who transferred from Florida a few years back.  So EIU does have quite a bit of experience and productivity returning on offense.

On the other hand, they have losses at some pretty crucial positions.  The man, the myth, the Illinois HS legend, JC6, is gone, leaving a void at QB.  During spring ball, they had a three-way battle for the QB spot; Brandon Large ultimately emerged as the starter, but Spoo praised Shadonta Travis and Doug Reynolds as well, so there's no guarantee that Large will be the starter come September 4th.  Still, none of them have taken a single snap in a game and making their debut at Kinnick Stadium against a top-ranked defense seems pretty damn far from ideal.  Even more pressing may be the new faces they're breaking in at offensive tackle, since whoever emerges there will be tasked with stopping Adrian Clayborn and Broderick Binns from invading the backfield at will and crushing whoever emerges as the starter at QB.  Yeah, good luck with that.

To be continued tomorrow in Part Two, wherein we examine EIU's defense and what we expect from the game.