BREAKING NEWS: Multiple sources have confirmed to Black Heart Gold Pants that the Big Ten has extended offers to five different institutions in order to expand the conference.

BHGP's sources indicate that the five schools are as follows: the University of Phoenix, La'James College of Hairstyling, the Sabaragamuwa University of Sri Lanka, the Electoral College, and Rutgers.

Said one source, speaking on condition of anonymity: "The first two selections speak for themselves, but the schools Delany's most excited about are Saba U--that's what he calls them--and the Electoral College.

"[Delany] was deasdset against international expansion until last weekend, when he got [inebriated] on gin and went on Wikipedia," our source told us. "I'm not sure what he was looking for specifically, but he read how Sabaragamuwa was 'proof of an existence of a monastic University in Palabaddala in the district of Ratnapura, Sabaragamuwa province. This ancient University had been established by Kalikala Sahittya Sarvagna Pandita, King Parakramabahu, the Second (1235-1271 AD) in Dambadeniya Period.' Hell of a story. In fact, we're most looking forward to hearing Brent Musberger repeat that story before games on ABC."

Another source told us about the Electoral College: "Everyone in the conference knows that it's not a real institution of learning and everything, but buying the rights to select the next President of the United States seems like a total 'Jim Delany' thing to do. We don't have anything totally in place yet, nothing we can leak or anything, but we're dreaming big. Also, we have gone ahead and trademarked the phrase 'NOW THE GAMES COUNT,' just in case." 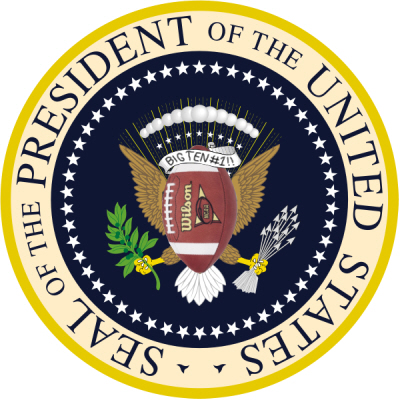 As the leaked logo confirms, the conference is expected to maintain the name "Big Ten" for branding purposes. This is expected to annoy every other conference beyond belief, a condition Delany is said to prefer.

Again, this information comes via multiple anonymous sources. We expect comment from the Big Ten shortly.