Share All sharing options for: Bored of Gophers? Pondering Other Season Finale Options 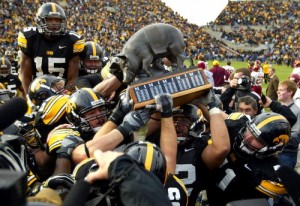 This never really gets old... but could it be better?

ESPN's Adam Rittenberg and Snr. Mas Casa, two Friends of the Pants from more legitimate outposts in Blogfrica, have been speculating about the possibility of Penn State becoming Iowa's opponent in the season finale rivalry game.  It's an intriguing option, considering that (a) Iowa-Penn State has become one of the most exciting and contentious (if one-sided of late) rivalries in the Big Ten, (b) Penn State's season finale rivalry with Michigan State is nothing more than a contrived excuse to battle for the ugliest trophy in the Big Ten that neither team really gives a shit about.  Morehouse took it a step further by looking at a few more teams and offering a poll; go vote there if you haven't already done so.  In the meantime, here's a breakdown of the possible season finale opponents...

Season Finale History: 25 meetings; Iowa holds a 16-9 advantage. They've met in the season finale in all but three of the past 25 years.

Pros: Lots of history, especially recently -- they've played each other in eight of the past ten season finales and there have been plenty of memorable moments, like Ed Hinkel's 4-TD day in 2005, the glorious satisfaction of 55-0 in 2008, and (of course) the epic goalpost theft of 2002.  Sure, all but the de-goalposting could have happened if the game took place earlier in the season, but having them take place in the final game of the regular season does add a little juice to the proceedings.  Also, while some Minnesota fans may claim that Wisconsin is a bigger rival, they don't chant "WE HATE WISCONSIN" during totally unrelated games, do they?

Cons:  Nothing really, unless you're just bored of seeing Iowa play Minnesota in the season finale.  A late November game in Minnesota could get chilly (though the same could be said of any other option here, too).

PENN STATE
Series Record: 11-11
Season Finale History: n/a
Pros: The Penn State series has produced some of the most exciting and momentous wins and moments of the Ferentz Era at Iowa, like the 42-35 rollercoaster win in 2002, 6-4 and the FU safety in 2004, Daniel Murray and the incredible comeback win in 2008, or Adrian Clayborn's rain-soaked punt block in 2009.  Could attract national spotlight if both teams are vying for a conference title or BCS bowl berth.
Cons: No more primetime games if the game gets moved to November.  A late-season loss (hey, it could happen) could be especially damaging to bowl or title aspirations.  Trekking to Happy Valley (or vice versa) would be a pain in the ass during Thanksgiving weekend.  Not a protected rival.

WISCONSIN
Series Record: 42-41-2 (Iowa leads)
Season Finale History: 3 meetings; Iowa holds a 2-1 edge.  They last met in a season finale in 2004, which was a rather memorable game.
Pros: Another border rival and one of the closest rivalries in the Big Ten.  Sticking it to Badger fans never really gets old.  The atmosphere at Iowa-Wisconsin games is often pretty electric, since you have two of the more rabid (and well-lubricated) fanbases in the Big Ten; toss in some bowl or conference title implications, and things could get really intense.
Cons:  Harder to get tickets at Wisconsin than it is at Minnesota.  Despite the long-standing nature of the rivalry (Minnesota remains the only team Iowa's played more than Wisco), it doesn't always feel particularly heated, although as with many things rivalry-based, that may depend heavily on one's perspective.

IOWA STATE
Series Record: 38-19 (Iowa leads)
Season Finale History: 5 meetings; Iowa holds 3-2 advantage.  They last met in 2001, when terrorists delayed the game until the end of the season and caused Grant Steen to fumble (fuck you, Al Qaeda).
Pros: It's Iowa State; like it or not, you can make a compelling argument that they are Iowa's biggest rival. No other game gets the state as fired up as Iowa-Iowa State.  And since quite a few teams play their biggest rival in the season finale (Ohio State-Michigan, Florida-Florida State, Clemson-South Carolina, Alabama-Auburn, USC-UCLA, etc.), well... you do the math.  Also: imagine the intensity if Iowa State's playing for a bowl berth or Iowa's playing for a potential BCS game or a national title.
Cons: Do we really need to give Iowa State even more motivation for this game?  It remains the ultimate no-win game for Iowa -- if they win, they've merely done what they're supposed to do and if they lose, it's armageddon.  It's also a fundamentally local rivalry, so long as Iowa State remains a middling program.

Season Finale History: 11 meetings; the series is deadlocked at 4-4-3.  Northwestern was actually a fairly common season finale opponent back in the '30s.  The last meeting was in 1939.

Pros: You only need to look at Iowa or jNW blogs during the week leading up to the game or this week's coverage over at The Rivalry, Esq. to see that the vitriol here is incredibly powerful.  Watching the Wildcats win three in a row at Kinnick has elevated the hate among Iowa fans and the smug satisfaction among Northwestern fans.

Cons:  jNW isn't a protected rival, so there's no way to ensure that they'd be in the season finale every year.  Losing the home finale is the pits (see: Western Michigan, 2007) and there is that unsavory matter of jNW kind of sort of owning Iowa in Kinnick since 2006.  And while Iowa fans may feel some animosity towards Northwestern and (especially) certain contingents of their fans, you'd be hard-pressed to find many who really consider Northwestern one of their biggest rivals.

Pros: Another border rival.  The hate is strong there, from both the players and the fans.  Beating up on Zook in a season finale could be every bit as enjoyable as beating up on Glen Mason or Tim Brewster-led teams.  Like Gopher fans, Illini fans are frequently disillusioned by late November and more interested in hoopyball, making tickets easier to score.
Cons:  Well, Zook ain't gonna be there forever (probably).  Illinois isn't a protected rival, either, so there's no way to guarantee a game with them at the end of every season.  Hating Illinois is fun, but much like Northwestern, are they really a big rival?

NEBRASKA Series Record: 12-26-3 (Nebraska leads)
Season Finale History: 18 meetings; Nebraska holds a 13-4-1 advantage.  Remarkably, Nebraska is Iowa's second-most popular season finale opponent, although all of those encounters came prior to 1945 (the year of the last season finale meeting) and most occurred in the 1890s or 1910s.
Pros: Despite the fact that the two schools who haven't played each other in a decade and have played each other only five times in the past thirty years, there's still a great deal of enmity present; chalk it up to the border rivalry that continues to fester.  In Iowa and Nebraska you have two of the most passionate and intense fanbases around, so the atmosphere at an Iowa-Nebraska game would likely be amazing.  Strong potential for national attention.
Cons:  Tickets to Iowa-Nebraska games would be really hard to come by.  Despite the long-standing enmity, most of the history here is of the ancient variety (only six games since 1946).  Would only really work if Nebraska is one of the teams added during Expansionpalooza, which is of course no sure thing.

MISSOURI
Series Record: 5-7 (Missouri leads)
Season Finale History: n/a
Pros: Yet another border rival.  A chance to finally face Missouri after they skipped out on a non-conference series with Iowa a few years back.  Like their brethern in the Lands of Lincoln and Ten Thousand Lakes, Mizzou fans tend to be an easily depressed lot and may have turned their hopeful eyes to roundball by late November, making it easier to score tickets for an away game.
Cons: The history just isn't there; of all of Iowa's border rivals (not including the South Dakota schools, of course), Iowa and Mizzou have played by far the fewest games.  Not only that, but the history here is really ancient -- they last tangled in 1910 (Mizzou won 5-0, in case you were wondering).  The number of Iowa fans who were even alive when that game took place is probably pretty damn tiny.  Outside of a shared border patrolled by degenerates, rednecks, and Iowans, these two teams don't have many common bonds.  Also, like Nebraska, would only really work if Expansionpalooza takes in the Tigers.

MICHIGAN STATE
Series Record: 21-18-2 (Iowa leads)
Season Finale History: 10 meetings; the series is deadlocked 5-5 in those ten games.  Michigan State was a consistent season finale opponent throughout the '70s; the last meeting was in 1982.
Pros: Well, there is some history there.  It's not like Michigan State has anything better to do, since their true main rival is locked in its untouchable blood feud with Ohio State.  Also, the Iowa-Michigan State series is one of the more underrated series of the past 30 years in terms of producing exciting and close games; since 1980, 17 of the 24 games have been decided by 10 points or less, with the last three contests all being decided in the final minutes (or seconds) of the fourth quarter or overtime.  There are also some truly memorable moments from the series, such as Chuck Long's infamous QB bootleg for a late TD in 1985 or, of course,"Seven got six."
Cons: Despite all that, does any Iowa fan ever get truly jazzed up to play Michigan State?  Not a protected rival.

NOTRE DAME
Series Record: 8-13-3 (Notre Dame leads)
Season Finale History: 14 meetings; Notre Dame holds a 7-5-2 record.  Notre Dame was a popular season finale opponent in the '50s; they last met in a season finale in 1964.  Surprisingly, Notre Dame ranks as Iowa's third-most frequent season finale opponent.
Pros: It's Notre Dame -- the excitement among Iowa fans for the chance to beat them in a season finale would be huge.  It's not a rivalry fabricated out of absolutely nothing, since there is history between these schools (who could forget the legend of the "Fainting Irish" game?).  And since it is Notre Dame, there's no question it would attract more national attention than usual -- that's just par for the course where ND is involved.
Cons: It's Notre Dame -- they don't give a shit about us.  This would be like Iowa-Northwestern in reverse, almost.  Iowa fans, like, oh, roughly one hundred and eighteen other fanbases, would absolutely love to smash up the Irish, but that feeling is not at all reciprocated.  As noted above, there is some history there (they were frequent rivals during Iowa's heady run under Evy in the '50s), but like the Nebraska history, it's pretty ancient.  Notre Dame has longstanding rivalries with Michigan State, Purdue, and USC that it would probably much rather play in the season finale spot (assuming Michigan is off-limits because of the Ohio State rivalry).

And don't forget to go vote in the poll at the Gazoo site.