Congratulations! You've just made the wonderful decision to draft Amari Spievey! Like most new Amari owners, you're no doubt filled with questions about your new family members. We here at Black Heart Gold Pants will try our best to answer any questions you might have.

What's so special about Amari Spievey? This will seem like a hyperbolic statement, but Amari Spievey is an utterly unique cornerback. Seriously. You've never seen anybody play exactly like him before.

Is that bad news? No, not really. Here's the deal: normally, one would think of a cornerback being fast, slight, and mouthy. Deion Sanders is fully to blame for that stereotype, by the way. Spievey, on the other hand, could very well be the surest tackling corner in the draft. He hits like he means it.

Wait, is this code for showoff hits? We're not going to get a ton of helmet-to-helmet calls, are we? Absolutely not. Spievey never received a penalty for a dirty hit at Iowa, mainly because he never hits that high; he usually puts his shoulder right through the receiver's thigh. Play over, gain of four, second down. Here's a visual aid: 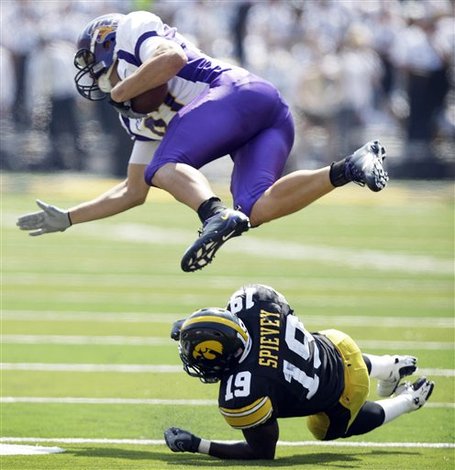 So how are his cover skills? Here, it gets complicated. In the Iowa defense, Spievey was rarely left on an island against a receiver without safety help. That's just the nature of Norm Parker's scheme. He was rather famously scorched on Penn State's first play from scrimmage last year. But... that's it. Otherwise, he's such an adept tackler--second on the team in solo tackles last season, and read that sentence as many times as you need until your brain breaks--that he routinely gave his receiver the underneath. It worked awfully well.

So he's a cornerback that didn't play cornerback like a cornerback? Well, that's unfair. He was still the best cover corner on the Hawkeyes when he had to be, to the point that some quarterbacks just didn't try testing him with anything but those wide open, minimal-gain flat routes. A defense doesn't bitchmake so many opposing QBs without a strong #1 corner. That said, a coach is probably going to be curious whether Spievey can play safety, considering his tackling skills.

Will Spievey be awesome? It depends on where he goes. At Iowa, he was the most special cornerback we've ever watched. He got torched once against Illinois in '08 and once against Penn State in '09. Those happened and you're free to read as much as you please into those plays, but also consider that they're the only two times that he got torched. It's not as if he's just plain too slow. On, say, the Ravens, he'd fit in beautifully.

Does that mean we're going to like him? His teammates and coaches certainly will the minute he steps onto the practice field and erases some tailback on a swing route. As long as he's not schemed into turning around and chasing guys on fly routes all game long, he will quickly endear himself to fans. Maybe even sell a few jerseys if is transition to the pro game is especially seamless.

Oh, one more thing: Is it seriously pronounced Spuh-vay? Yes. We don't know why either.