Congratulations! You've just made the wonderful decision to draft Bryan Bulaga! Like most new Bulaga owners, you're no doubt filled with questions about your new family members. We here at Black Heart Gold Pants will try our best to answer any questions you might have.

Will Bryan Bulaga play well with others? Bulaga came from the University of Iowa, which places a high value on offensive line discipline. As such, here's what one scout told Football Outsiders:

Their line is so fundamentally sound and perfectly coached that each player makes life easier for the others, making everybody look a little too good. Bryan Bulaga looks great on tape, but I remember saying some wonderful things about Robert Gallery a few years ago.

All of which is to say, it would probably be very beneficial for Bulaga to be placed in a stable, talented offensive line, rather than expecting his presence to fix a chaotic mess of holding and sacks. For this reason, we strongly recommend that Oakland pass on Bulaga. They tried it with Robert Gallery, and Gallery's just now putting the pieces of his career back together.

Is Bryan Bulaga housebroken? As a matter of fact, yes! Not all offensive linemen are able to get through school without soiling your metaphorical carpet, but Bulaga was never arrested or cited during his time in Iowa City, and he has no evident character issues that might ward off a potential owner.

You should not put Bulaga in a kennel at night, because he is a human.

What is Bryan Bulaga's expected lifespan? Fortunately, you can look forward to many years of enjoying your new Bulaga. The lineman only turned 21 a month ago, meaning a decade-long career would only put him at 30 by the season's end. Bulaga was waylaid by a thyroid disease over the course of this season, but he began returning to his previous levels of dominance by the end of the year. He has since received a clean bill of health from the Mayo Clinic. He has papers.

Enough about all this; let's talk fun stuff! What does Bulaga enjoy doing? As you can see, sometimes Bulaga likes going to public places and smiling, but if he's in his football uniform, he won't smile! But what he enjoys doing the most is playing football, and on that note he enjoys run blocking the most. Bulaga's greatest strength is getting to the second level on run plays and erasing unsuspecting linebackers or sealing a corner for his ball-carrying friend. He doesn't consider a block "finished" until the defender is dead. We've attached a visual aid to illustrate this fact. 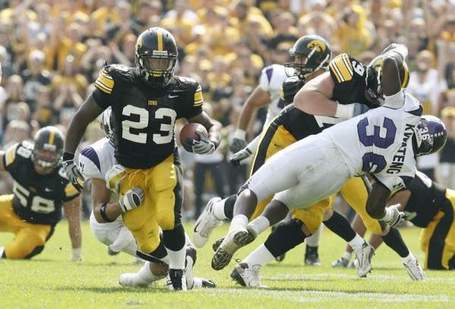 Please note: your experience may vary slightly, as nobody in the NFL is even half as terrible at football as Prince Kwateng.

Is there anything that Bulaga is not good at? Mmm... nope.

Oh come on. No, he's pretty much perfect and exactly what you need.

Well then why isn't he going number one overall? Why isn't he even going to be the first tackle taken overall? Okay, look. Bulaga is not a freak of nature. His combine stats were meh, especially compared to someone like Bruce Campbell; Bulaga "only" ran a 5.26 40-yard dash, and his bench presses--26 at 225 at the combine, and 27 at Iowa--weren't great either.

Shouldn't I be worried about drafting Bulaga, then? Actually, no! Here's why:

But still, I should not call a play where Bulaga is expected to run 40 yards untouched in a straight line? For many reasons, yes, you should not do this.

Jokes aside: will Bulaga be awesome? Probably. Keep in mind much of his value lies in the potential and theoretical, since he's really only had one healthy season at tackle (as a true freshman, he was competent at guard). But if the thyroid problem is resolved--and we're not about to cast doubt on that if the Mayo Clinic says it's all good--then there's no reason to think he won't return to his prior form, which was both violent and dominant. He will not turn a bad line around by himself. He will make a decent line better, and he will make a good line strong to quite strong.

But seriously, Oakland, do not touch this man. We've never forgiven you for Nick Bell's career, much less Robert Gallery's.