Share All sharing options for: BHGP Cracks The Eyjafjallajokull Case

As regular BHGP readers already know, the BHGP editorial staff's primary passion is volcanology. We spent the entire month of September ignoring the Hawkeyes to cover the Eichenslauss volcano in the German Alps, and we haven't regretted it since.

To that end, we've been enthralled by this Eyjafjallajokull (pronounced shoe-SHEF-ski) volcano. As NASA noted, the eruption itself isn't terribly powerful; it's that there's a glacier mucking the lava up and making it especially harmful for the engines of the planes in question.

So we were a little confused when, perusing the pictures of this eruption, we noticed something that mass media is probably too afraid to report on. 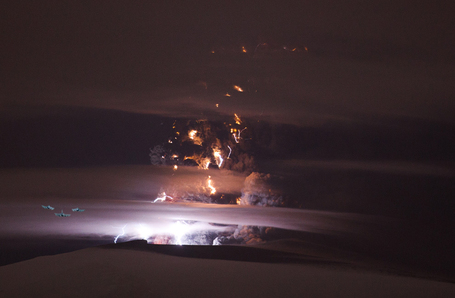 The story is that airplanes can't fly in these conditions on account of the ash and the engine muck, right? So we saw these three airplanes flying away from the scene of the eruption--in formation, even--and we were a bit confused... until we saw the other pictures of the eruption.

EXHIBIT B: NARROWING THE GAP OF RESPONSIBILITY 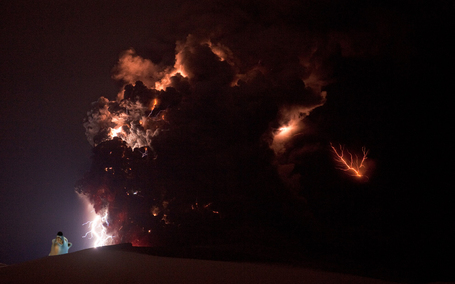 Uh-oh. That looks a little familiar. Now, maybe it's just a poorly placed photograph with a misleading angle. Maybe the perspective's all off. Maybe that's not who we think it is. Maybe it's not--

EXHIBIT C: OH YES IT GODDAMN WELL IS WHO YOU THINK IT IS 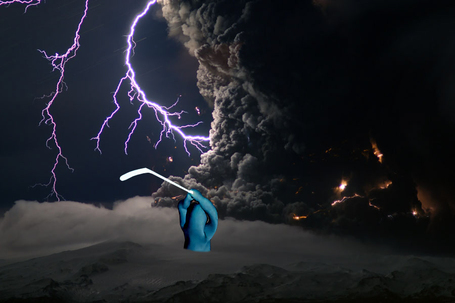 NOOOOOOOOOOOOOOOOO!!!! HOCKEYBEAR, you're ruining everything! The earth will be destroyed, one hockey college town at a time! I never even got to ask Laura from Family Matters out on a date! GOD DAMN IT!