The urge always comes when he's alone at the office, when the silence surrounds him, when he's necessarily left to his own devices, when his brain is free from distraction--and must distract itself.

That's when Kirk Ferentz gets the urge to wonder what if. Not what if he'd taken the Michigan job, or the Notre Dame job, or any of the NFL jobs. That's no reason to wonder. No, his imagination is preoccupied with another possibility.

What if he'd pursued rock and roll instead of football?

Perhaps he'd have been no good. Or perhaps, if he'd have put in as many hours on the axe as he had in the film room, he'd have been a horned, hooved rock god, a fucking scorcher, Jimmy Page's badder, better younger brother. Yes, this is what his brain tells him.

And so he looks up at the picture of him getting doused by his players at the Orange Bowl, he smiles, and he squints just enough that the Gatorade looks like an epic mane of hair, fit for a rock god like himself. Then he closes his eyes all the way, remembers the roar of fans he hears every Saturday, and thinks maybe, just maybe they'd be making that noise for him if he were... 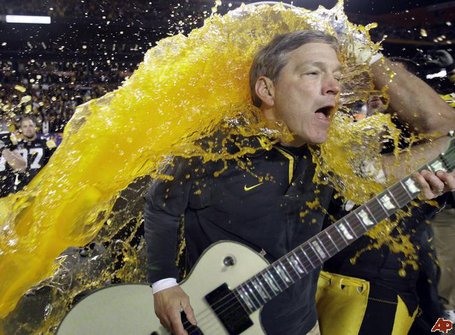 "Squeeze my lemon till the juice runs down my leg; squeeze it so hard I fall right outta bed..."

Oh well. He's 54 now. That's ancient for rock stars. Maybe he could have just started coaching later. Maybe in another universe, in an alternate reality. Maybe.