Share All sharing options for: It's Not Plagiarism If You Link To It Went to Class but Is Not Respectful to the Media 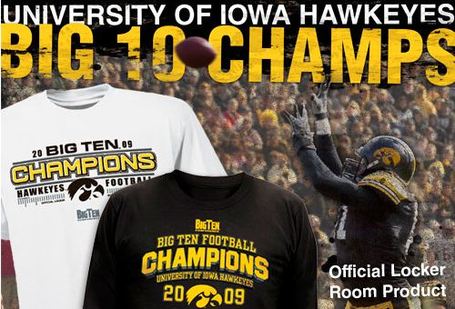 Most teams and leagues ship the pre-printed apparel of the losing team to Africa.  Iowa and the Big Ten would rather you take up residence in an alternate reality and wait for the day, 25 years later, where the season will be a distant enough memory that you can wear a patently false championship t-shirt without repercussion.

Who Barta'd?:  There are any number of reasons why Don Doxsie's weekend opinion piece on Fran McCaffery could be considered stupid.  For instance, did you know that there are the same number of letters in "Don Doxsie" as there are in "Joe Stalin"?  They both have beards, too!  Doxsie is clearly a Communist psychopath!

But when you peel away the fine layer of retard dust, the crux of Doxsie's piece is that Iowa should have chosen a "big name" for the basketball job.  The names he lists are somewhat comical: To say that Iowa fans were "salivating" over the middling coach at Dayton or a Duke assistant with no head coaching experience other than what he has received by osmosis from his father (ask Oklahoma and Mizzou how that goes) would normally be the dumbest thing said in a column.  But the point is made: Iowa should have pursued someone whose name alone would excite the fan base.

As CBS Sports writer and noted The Miz impersonator Gary Parrish pointed out in between appointments at his salon and Tan World, chasing "name" coaches around the country with bags of money in tow is exactly what not to do.  Case in point: DePaul.  And St. John's.  And Oregon.  And Arizona and Memphis last season.

True story: DePaul officials were told weeks ago that Tony Barbee was interested in replacing Jerry Wainwright, and that he'd be willing to talk with the Big East school as soon as his fourth season at UTEP concluded. It concluded March 18 with a loss to Butler. So it stood to reason that Barbee would get a call March 19, maybe March 20. But the call didn't come. Why? "DePaul was working off some dream list," the source said. "Phil Jackson was probably on it."

DePaul officials were interested in Barbee but were too late by the time they pursued him because they spent weeks and maybe months -- remember, Jerry Wainwright was fired Jan. 11 -- living in a fantasy land and making the same mistake nearly every school makes these days. That mistake: Tricking yourself into thinking something impossible is possible instead of operating from a realistic starting point. DePaul is the worst example but not the only one. Arizona and Memphis did it last year. St. John's and Oregon have also done it this year.

Not included in that listing: The Iowa Hawkeyes.  The Iowa "dream list," the one discussed ad nauseum on the oft-mentioned message boards and on talk radio (I'm looking at you, KCJJ), included names like Bruce Pearl, Jay Wright, Ben Howland, and Jamie Dixon.  These names exist in an Alice in Wonderland level of fantasy, and -- to his credit, considering his job is on the line with this hire -- Gary Barta knew it and acted accordingly.  Meanwhile, Fran McCaffery has proven to be anything but the quiet, bookish basketball nerd that the QC Times football writer portrayed him as, knocking out interviews (like the one he did with Dochterman and pals yesterday on KXIC) and apparently retaining all the remaining players and incoming recruits.  So suck it, Doxsie.

Low APR, Nothing Down in Minneapolis.  The NCAA released their annual Academic Progress Rate (APR) report this week.  Two years ago, I attempted to explain APR and why it matters (I even used the same pun in the title, because it's just so damn obvious) in the wake of the 2007 Year of Arrests; essentially, a team is required to keep its players academically eligible and on the team.  For each player who either leaves his squad or is ruled out for grades, a program loses APR points.  Lose too many APR points and drop below the dreaded 925, and you could be subject to NCAA sanctions, such as lost scholarships.

Iowa finished the 2007 season with a 929 score.  When included in the four-year average to compute APR, it gave Iowa a 950, far more than what is necessary to stay in the good graces of the NCAA.  This year, Iowa scores a 946, after a slight drop-off due to classroom issues.  Again, though, Iowa's score is enough to rank in the middle of the Big Ten pack, and is far above the minimum needed to avoid sanctions.

The same cannot be said for Minnesota which, three years into the Brewster regime, has dropped to 915 after a disastrous 2008 where the program scored a meager 887.  Minnesota would need a 955 in 2010 to move back above the 925 threshold; the Gophers haven't broken 935 since Brewster was hired, so that might be unlikely.  Fortunately for the Gophers, and unfortunately for humanity at large, it is unlikely Minnesota will be hit with a penalty this year:  The NCAA has been liberal in granting one-time conditional waivers, especially to BCS schools (the only BCS school serving APR-related penalties in any sport right now is Indiana basketball, which lost two scholarships in the post-Sampson exodus).  Two years in a row below 925 could bring a lost scholarship or two, depending on how far below the cutoff Minnesota remains.  Barring a mutiny, none of the other Big Ten programs are in any serious danger.