Share All sharing options for: We're About To Blow This Name Of The Year Thing Wide Open

This may all be a moot point, since Iowa native Cynnamon Crabb is currently leading the voting, but we can't let this go unnoticed. The third seed from the Bulltron Regional, Hannukkah Wallace, is not who he seems. Ladies and gentlemen, there's a rather transparent pseudonym at work here.

And now let's examine them.

Sensationally athletic: Somebody who could potentially qualify for the Olympics as either a sprinter or a bobsledder is, beyond a shadow of a doubt, athletically gifted beyond 99% of the general population's wildest imagination. Similarly, someone who could qualify for a roster spot in the NFL for two different positions--one of which is wide receiver--is unbelievably physically gifted. Hmmm.

Is named Hannukkah Wallace: One of the easiest, laziest tricks of creating a pseudonym is to make your "new" first name rhyme with your real one. Bark Morehouse, etc. etc.

So. In case it hasn't been made abundantly clear what's going on here, we contacted Jamaica's Ministry of Everything* and tried to receive confirmation of Hannukkah Wallace's existence. The following picture was all the evidence they could give us. 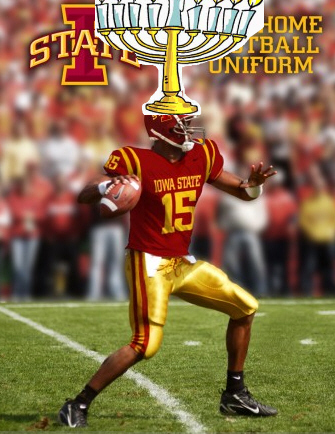 Yes, Seneca--or, shall we say, Sennukkah Wallace is behind this all. Fortunately, he's losing to Cynnamon Crabb, so it's all moot. Perhaps he wanted to find out what it's like to lose against Iowa. Oh, quit crying. Either we make that joke or CrossCyed does.

*If you believe anything about this statement, you should be shot at once.