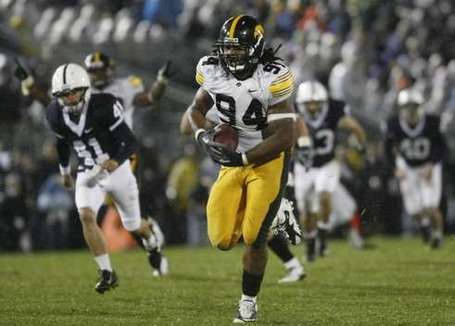 As expected, Adrian Clayborn pled guilty to disorderly conduct resulting from a January 2009 altercation with an Iowa City cabdriver.  We're not going to delve into the speculation over Clayborn's motives for taking a swing at a cabbie; let's just assume Adrian took a coffee mug in the temple from the chief of police of Malibu and hates the fucking Eagles.

Disorderly conduct is classified as a simple misdemeanor and carries a whopping $100 fine with it, which should say something for how serious this incident was.  There's not a prosecutor in the state who writes down an assault charge to a simple misdemeanor unless his or her case is extremely flimsy, and there's not a defendant in the world who doesn't accept the offer unless they're worried about civil litigation or don't have $100.

As for the season, expect no more than a one-game suspension.  Given Ferentz's stance throughout this case -- that he was standing by his player and didn't feel Clayborn had done anything warranting suspension or dismissal -- even that is in doubt.  Whoever is replacing Jake Christensen as quarterback at Eastern Illinois might want to send KF a muffin basket right about now.