Share All sharing options for: Apparently Devan Bawinkel Is Nowhere Near The Greatest Trillionaire Of Them All

Recall, if you will, our lament this morning about Devan Bawinkel's "12 trillion"; that is to say, playing 12 minutes (or 30%) of an entire game without registering a single statistic. To do nothing of note at all over 12 minutes of gameplay is something of a remarkable (if ignoble) feat. We also assumed, pending further research, that Bawinkel was the crown holder for biggest trillionaire in college basketball history.

How foolish we were.

Comes now that Bawinkel does not, in fact, hold the trillionaire record. Thanks to one intrepid and well-informed Hawkeye Lounge reader, we know that the record is nearly unapproachable:

The 12 trillion by Winks is the longest by a Big Ten player this season by five minutes.

It is tied for the second-longest by any Division I player this season. Jeff Georgatos of Harvard had a 13 trillion earlier this season against Princeton.

That's all fine and good and puts Bawinkel in some, er, "elite" company, but you'll want to buckle up for this one:

We know what you're thinking: that cannot possibly be true. No way, no way, no way. No. Fortunately, this is the Internet, and the Internet was made for keeping box scores forever. Lo and behold, via StatSheet.com: 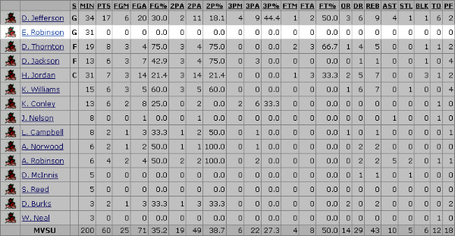 We have no idea how that could possibly happen. Like, even if someone were shaving points, that guy would at least be hoisting bad shots and turning the ball over. Hell, we could literally sit down at the top of the key during a game and probably get a rebound or two to fall in our laps*.

So, here's to you, Mr. Robinson. Titus loves you more than you will know. We sincerely hope this performance was to win a bet; if actual effort went into this, well, that might be too much for our brains to comprehend.

*Actually, we'd probably get ejected for contempt of court.**