Share All sharing options for: It's Not Plagiarism If You Link To It Is Coughing Up More Cheddar

Are you willing to trade $3 per ticket for a BCS win? Yes, probably, but there's no point in asking because you don't get to choose: The biggest news of the day, from an Iowa perspective, is the completely unsurprising news that in the wake of Iowa' 24-14 dismantling of Georgia Tech in the 2010 Orange Bowl, ticket prices are climbing once again:

If anything, a less-than-10% surcharge in the wake of a season like 2009 is reasonable; we still expect Iowa to sell out every game in 2010. Considering the fact that Iowa basketball can barely get a majority of its sold ticket owners to actually show up, this hike is a triviality when it comes to maintaining football ticketholder loyalty--and that's before the minimum donation amounts for certain tickets. This will be money not missed by Iowa fans.

Trill is when you're hustlin', trill is when you're grindin'; Trill is when you punch in that clock overtimin': Ohio State closed out their home slate with a thorough dismantling of Illinois, 73-57. The students recognized that while it was bad that they wouldn't be seeing Evan Turner anymore, the real tragedy is that there would be no more Mark Titus, no Club Trillion, to entertain the fans, ever again at Value City Arena. Thus, to mark (sorry) the occasion, the student section rolled thick, son in the greatest Trillion Man March to date: 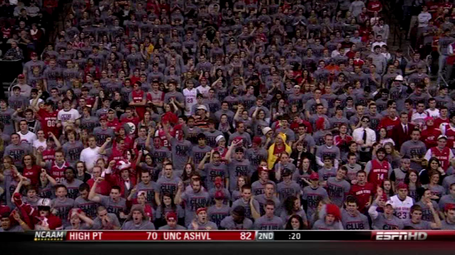 (Click for a bigger picture; we strongly recommend this)

They also had inflatable sharks, courtesy of Mr. Titus. Of course they did.

Now, this display is impressive in and of itself, but let's direct your attention to someone who didn't wear the shirt, and no, not that asshole who draped himself in yellow for no reason. Check out about three quarters of the way to the right, little more than halfway down. Two guys in dress clothes. The guy on the right is whoever, but the one on the left? Is that... is that a "Sabotage" costume? Here, judge for yourself: 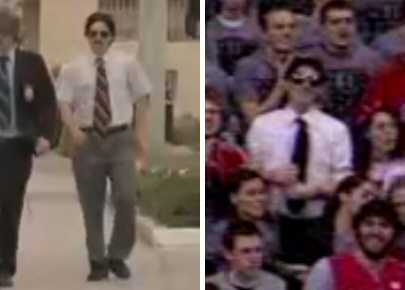 Oh, and as for Titus? The box scores don't reflect it, but multiple people watching live reported that he did make it into the game. If he did, it registered his trademark One Trillion. The basketball gods would have it no other way.

Yeah, I'd say not: Hawkmania gives us this passage, to be read with a sigh and rolled eyes:

Bohannon and the 15th-ranked Badgers host the Hawkeyes at 7:30 p.m. today, the last game that the former Linn-Mar prep from Marion, Iowa, and teammate Trevon Hughes will play on the Kohl Center court.The pair have been a part of teams that have combined for 63-6 record at home during their careers and Bohannon doesn’t regret his choice at all.

Also things people don't regret: deleting that email from the wealthy oil heir from Nigeria, passing on that pregame shot of Everclear, and not marrying the first woman to give them oral.

So apparently [COACH REDACTED] lacks composure: We'd be pretty surprised that a coach who isn't [REDACTED] would pull a stunt like this after a win. C'est le fou, I guess.. Oh, also, his team's +/- suggests their high rank and potential seeds are aberrations. Also, he is who he is. Take this information with you into your legal, money-free pools in a couple weeks.

We were going to set up some dominoes to spell this post out, but typing it is waaay easier: We know OK Go videos sorta "peaked" a few years ago--blame their label--but this new one might be one of the most brilliant we've ever seen.

OH HEY WAIT WE'RE NOT DONE WITH THAT BOHANNON ARTICLE: God damn it:

"I knew that coach (Bo) Ryan would be here for my entire college career. I didn’t have that same feeling about coach (Steve) Alford. When I was being recruited, there were rumors about him possibly leaving and how much he really wanted to be at Iowa."Alford did bolt for New Mexico after Bohannon’s freshman season with the Badgers, and the 6-foot-2 guard found an opportunity to grow his game at Wisconsin.

That's right: Jason Bohannon was too perceptive to play for Iowa. Clearly, the way to get kids like him to stay in state more often is to fire Todd Lickliter.