We Must Break You: We Talkin' Pre-Seeds? Really? (Yes, Really)

Share All sharing options for: We Must Break You: We Talkin' Pre-Seeds? Really? (Yes, Really) 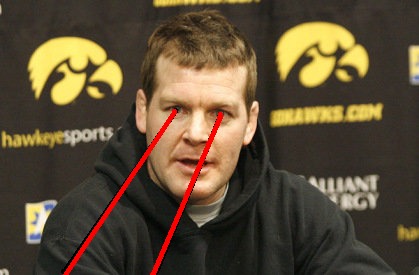 Who are you to say that Tom Brands doesn't shoot lasers out of his eyes?

Because we are starved of topics of conversation at the moment, and the #1-ranked Iowa wrestling team is heading to Ann Arbor this weekend to kick some ass and pick up a 34th Big Ten Championship, that's why.  The Big Ten released the "pre-seeds" for the Big Ten Tournament yesterday, giving us a rough look at what the brackets will look like at the tournament this weekend.  As their name implies, these seedings aren't finalized -- the final seedings (and tournament bracket) are locked down after a meeting between the coaches on Friday.

Like every conference tournament put on by the Big Ten, the league's inability to count and/or adversion to round numbers does make bracketing difficult.  In hoops, five teams get byes into the quarterfinals and the bottom six battle it out to fill those last free spots in the quarterfinals.  That's largely how they do it in wrestling as well, although it's not rigidly organized so the top five teams (or wrestlers, in this case) get byes and the bottom six battle it out.  Why not?  Because then a team that had more wrestlers in the 6-8 seed range would have the chance to wrestle more matches and accumulate more points towards the team championship -- perversely giving them an advantage over a team like Iowa, who's loaded with guys at the top-end of the seedings.  Instead, the Big Ten allocates the first-round matches evenly among all schools, so no team gets an unfair advantage.  From a self-interest standpoint, we want to see guys like Metcalf, Borschel, and McDonough get those matches; the risk of a loss is low and the potential for them picking up bonus points (good for the team score, obviously) is high.  Conversely, we'd rather not see Janssen or Kerr (whoever gets the nod at 157) or Beatty (expected back at 197 after his lengthy injury lay-off) get one of those matches.  But we won't know who gets those matches until Friday.

The full pre-seed breakdown is down below, but basically Iowa did very, very well, as you'd expect after they spent the last two months laying waste to all challengers in the Big Ten.  Metcalf, Borschel, and Beatty all picked up 1-seeds.  McDonough, Dennis, Morningstar, and Erekson all nabbed 2-seeds.  Marion and Keddy both got 3-seeds, and Kerr was slotted in as a 5-seed (although, again, there's no guarantee he'll be the guy at 157 come Saturday).  Based on their performances throughout the year, JayBo and Metcalf obviously have little to fear from either side of the bracket.  But the good news at having five guys as 2- or 3-seeds is that they won't have to face the top seeds until the finals.  Since Dennis, Morningstar, and Marion all lost to their respective top seeds, that's a definite plus; no need to face one of those guys any earlier than you have to.

In terms of qualification for the NCAA Tournament, Iowa should have no difficulty qualifying 9 weights (everything but 157) if everyone wrestles to their seeding.  Here's the per-weight breakdown for the Big Ten's NCAA qualifiers:

This probably isn't going to change much in the final seeding.  Again, we're going to assume the 9-11 guys in the Big Ten aren't going to pull any upsets.  That leaves Sanders, Triggas, and Deneen on McD's side of the bracket.  He went 4-0 against those guys this season, beating Sanders twice (6-4 at the National Duals and 13-2 at the dual last month) and Triggas and Deneen once apiece (9-1 and 8-0, respectively).  He shouldn't have too much difficulty making it to the finals to face Escobedo, though Sanders should be more of a challenge than he was a few weeks ago, assuming his ankle has healed up (then again, ankle injuries can be a bitch).

WAY TOO EARLY PREDICTION: McDonough, Big Ten Champion; A bit homer-ish, sure, and Escobedo is no joke, but McD's looked so damn awesome, I can't help myself.

Dennis and Gomez could swap spots in the final seeds, but probably not since Dennis has the head-to-head win over Gomez.  Not that there's much difference between 2 and 3.  Based on these seeds, Gomez, Stevens, and Paddock would be on Dennis' side of the bracket.  He went 3-0 against them, but all three wins were narrow (3-2 over Gomez, 2-0 over Stevens, 3-2 over Paddock).  Based on past results, Dennis could certainly make it back to the finals.  Based on more recent form... that seems much dicier.

WAY TOO EARLY PREDICTION: Dennis, 3rd place; Dennis has owned Gomez of late, but I'm not terribly confident in that continuing or in his recent slump not lingering into this tournament a bit.

There might be some movement in these seedings before they're finalized.  Or not -- it's damn hard to differentiate between Thorn, Marion, and Lynch.  All three lost to Humphrey, with Thorn coming the closest (losing a 5-3 decision).  Their results against one another were unclear, too.  Marion split two matches with Thorn (getting pinned in 0:42 at the National Duals and beating him 15-7 at last month's dual) and lost to Lynch (8-6).  Thorn split with Marion and pinned Lynch in 2:18.  Lynch had the aforementioned win over Marion and the pinfall loss to Thorn.  So, really, Marion could wind up seeded 2nd, 3rd, or 4th, which means he could wind up wrestling anyone but Schmitt.  It would be very nice to avoid the 4-seed, obviously, to stay away from Humphrey until the final.  Marion went 3-3 against the guys seeded 2nd through 7th, with wins over Thorn (15-7), Archuleta (pinfall in 3:16), and Osterman (6-0), and losses to Thron (pinfall in 0:42), Lynch (8-6), and Prater (pinfall in 2:24).  Consistency hasn't been Marion's forte this season and he's had definite trouble with the other top guys at 141.

WAY TOO EARLY PREDICTION: Marion, 2nd place; This assumes he keeps the 3rd seed; if he falls down to the 4-seed, adjust it to a 3rd place finish... I don't see him getting by Humphrey, so the best thing to do is avoid him as long as possible.

There might be a little movement between Ruschell and Molinaro, but it's pretty irrelevant for our purposes.  Metcalf steamrolled everyone he met at 149 except Palmer (3-1) and Ruschell (9-2).  Are you gonna bet against that continuing?  Didn't think so.  Interestingly, if these seeds hold up, Metcalf could get another crack in the first round against Bertucci... y'know, the Knee-To-The-Head Bandit.  I'm sure Brent won't have any extra motivation for that match.  Nope.  None at all.

Don't assume that Kerr will get the nod at 157 because he's listed here; at his Tuesday presser Brands said the spot won't be settled until Friday when the final brackets have to be set.  Not that it really matters, of course -- by this point, we should all know better than to expect much from 157.  Hopefully whoever it is can pick up a few wins and guarantee a spot at the NCAA Tournament.  Anything beyond that is pure gravy.

WAY TOO EARLY PREDICTION: Wrestler X, 5th place; I have very little confidence in whoever gets the nod here.

WAY TOO EARLY PREDICTION: Morningstar, 2nd place; Screw "fifth time's the charm" -- I'm not picking him past Howe until he proves he can beat him.

Borschel and Manuel both went undefeated in Big Ten competition, but since Borschel went 7-0 (plus a forfeit when Manuel sat out) and Manuel only went 4-0, JayBo's the obvious choice for the 1-seed.  Borschel beat everyone listed here except Manuel and Blanton (he didn't wrestle either man), and he got bonus points against all of them except Zeerip (who JayBo beat "only" 6-0).  He really should cruise to the finals.

WAY TOO EARLY PREDICTION: Borschel, Big Ten Champion; JayBo is a man on a mission this year.

Probably not too much change here at the top.  Dergo went 8-0 in Big Ten competition.  Erwin and Keddy went 7-1, but Erwin's loss was to Dergo and Keddy's loss was to Erwin.  Keddy's win over Pucillo was huge and likely keeps him out of the 4-spot, which would have meant a semifinal match with Dergo.  Now he can avoid Dergo until the finals.  Erwin, Cameron, and Montoya are on Keddy's side of the bracket; he went 0-1 against them, losing to Erwin (6-4) and not facing Cameron or Montoya.  Keddy's looked better of late, so hopefully his late season surge continues into this tournament.

WAY TOO EARLY PREDICTION: Keddy, 2nd place; I think he can get by Erwin in a rematch, but he's been too inconsistent to tab him as champion.

A bit surprising to see Beatty as the 1-seed despite being injured for the entire Big Ten season, but he did beat Brandvold at Midlands (6-3) and his only two losses on the season were Varner of Iowa State, the top-ranked guy in the nation at 197.  But regardless of where Beatty gets seeded, this weight is going to be a major wildcard for Iowa simply because of the uncertainty about Beatty's health.  Barring a major last-minute setback, he's going to compete, but it's anyone's guess as to what kind of form he's in and if he has the conditioning to get through a tournament.  It might be best for him to do just enough to guarantee qualification for the NCAA Tournament and then rest up, but since he's a senior and this is his last crack at a Big Ten Championship, that's probably not going to happen.

WAY TOO EARLY PREDICTION: Beatty, 2nd place; No idea what to expect here, really, so two wins and a close loss in the finals after running out of gas seems as reasonable as anything else.

Everhart and Erekson both went undefeated against Big Ten competition, but Everhart went 8-0 (and 25-0 against non-Big Ten competition) and Erekson went only 7-0, with no other wins since he was out of action until January.  Wade, Morrison, and Apland are on Erekson's side of the bracket at the moment; Erekson went 2-0 against them, with a decision win over Wade (6-1) and a pinfall win over Morrison (2:53).  Erekson had a couple of sluggish wins down the stretch last month, but hopefully two weeks off has his conditioning level back up to par and he can cruise to the finals.

WAY TOO EARLY PREDICTION: Erekson, Big Ten Champion; Big Dan's late-season swoon of sorts is a little concerning and it's unclear if he has the conditioning level yet for a tournament, but I think he gets it done.

*** We'll be back Friday with a more thorough BRACKETOLOGY after the complete brackets are released. ***