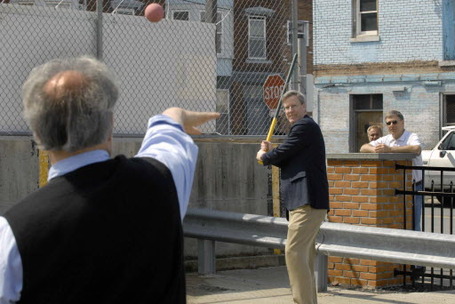 For the next couple of days, there will be only one story of note: Fran McCaffery.  He will be introduced to the Iowa press at 11:00 this morning, with a meet-and-greet for the public at Carver Hawkeye Arena at 5:30 this afternoon. The initial PR, as is typical of the University of Iowa Athletic Department, was a disaster, as the initial press release misspelled the new coach's name.  Let's hope he didn't see that.  McCaffery (E before R except after C, people) flew with his family to Iowa city, sat down for an interview with the Big Ten Network's Dave Revsine, and talked with the returning players.  The players interviewed after the initial meeting were positive; unsurprising for Matt Gatens and Jarryd Cole, who have been committed to Iowa since Steve Alford was here, but reassuring for possible transferees Cully Payne and Eric May.  First, Payne:

"I think the transition will be great. Coach was real in depth with wanting to get to know everybody which is a great feeling for us. We all left the room and looked at each other and said this is it and coach will be a great fit for us. We are excited to play for him."

As for Eric May:

"I like what he wants to do with our team and his philosophy of the game and how he wants to play. I am excited to get going.

"The transition will be smooth. We have a good group of guys. The change of coaches doesn't change how you have to work. You always have to keep working. If everybody keeps their mind right it will be a smooth transition."

To be fair, those quotes are coming from the athletic department after a closed-door meeting, and nobody met with the press afterward; if Payne walked out of the initial meeting and said OMG I HATE THIS GUY LOL, we probably wouldn't hear it.

The media, given confirmation of the choice Sunday afternoon and with column inches to fill before Monday's introductory press conference, did what was expected: Lost its collective mind for a second.  Rob Howe sent breathlessly-worded Twitter updates as he chased the McCafferys' SUV from the Cedar Rapids Airport to Iowa City (Dochterman, who has been doing actual reporting throughout like a good newspaperman should, might have gone slightly over the top with voyeuristic video of the new coach and his family getting out of the plane and milling around their truck).  All hell broke loose for a couple of hours, as reporters tailed McCaffery and his family to the Hall of Fame building and introduced the new coach to the infamous UI sports fishbowl.

Once the plane had landed and the smoke had cleared, some reporters (and, in some cases, I'm using that term very loosely; this coaching search has tarnished the credibility of a lot of purported "insiders" and their "sources" that fed them names like B.J. Armstrong, Keno Davis, Jay Wright, Bruce Pearl, Jamie Dixon, and Keno Davis again) regained sanity and took an objective look at the situation.  Chief among them, John Bohnenkamp:

I’m not going to judge new Iowa basketball coach Fran McCaffery because I don’t know him. I’ve never seen his teams play, and I don’t know much about their style, other than it’s an uptempo game. He has been in Iowa City for only a few hours, and what is amazing is how many Hawkeye fans think they do know him. No, he’s not the big-name hire that everyone craved. No, he doesn’t have any Iowa connections — for that matter, he doesn’t have many Midwest connections outside of the fact that he was at Notre Dame for a little more than a decade....

Here’s the truth, Iowa fans — the big names weren’t coming here. Bruce Pearl was a nice pipe dream, we don’t know what Scott Drew’s interest was, if there was any, and names like Jamie Dixon and Jay Wright were nice to chew on in hopes that maybe this job was really as attractive as everyone would like to think that it was. Barta wasn’t going to gamble on Billy Gillispie (too many DUIs) or Tim Floyd (recent NCAA allegations). The rumored consideration of former player B.J. Armstrong would have excited some who remember the good old days, but the reality was a lot of money was going to be spent on someone who didn’t have any coaching experience.

So "overwhelmed and overjoyed" may not capture the mood of the Iowa fan base after it learned of the school’s hiring of Fran McCaffery. Then again, that was never likely to be the reaction after this hire. Iowa men’s basketball, for those who haven’t noticed the last few years, isn’t carrying a lot of cache nationally. No matter. After this morning’s introductory press conference, Hawkeye fans will surely love Fran McCaffery. Why? Because college fans always love their new coaches after their introductory press conferences. The coach says the right things, gives the right first impression....

But Iowa Athletic Director Gary Barta must not have been able to find a coach with two ‘Z’s in his last name. One day, we’ll be able to determine if he did the best he could after that. This isn’t that day.

Jon Miller says Iowa fans should rally around McCaffery, if only because he actually wants the job:

However, I do think it’s time for Iowa fans to circle the wagons and embrace Fran McCaffery now that he has been hired as the 22nd coach in the history of the Iowa basketball program, if for no other reason than he is a Hawkeye now, and he is whom Gary Barta hired.

Each of us wants to see the program return to relevance; it’s not really relevant right now. However, Iowa just hired a guy who believes that it can be, and who believes its more relevant than St. Johns or Seton Hall; McCaffery had been sought after to fill those positions.

But the man from Philly who was once dubbed ‘White Magic’ during his playing days at Penn said ‘no thanks’ to those eastern jobs, because he wanted to see the Iowa opportunity to the end.

To repeat; McCaffery wants to be at Iowa. Right about now, I don’t know how long that list is as it relates to accomplished basketball coaches. He turned down strong overtures from other schools because he wanted the Iowa job.

Smiles and optimism will rule Monday’s gathering, just like three years ago when Todd Lickliter was introduced by Barta for the same position. Even the most positive Hawkeye fan proceeds with trepidation after the last two coaches were shown the door.

It’s not a good scene here. Sorry. Attendance is at an all-time low while fan apathy sits at an all-time high. Three NCAA tournaments, one win in the dance and a whole lot of losing during the last 11 years will do that to folks.

Barta and McCaffery are smart men. They know what’s ahead of them and advance with great determination. It doesn’t mean they will succeed.

Really, we move forward with hope. Hope that McCaffery can translate his success at Siena to ascension up the Big Ten Standings. Hope that he can recruit. Hope that he can connect. Hope that the next coaching hire comes when he retires from the school…or at least until he‘s coached through half of his contract.

Steve Batterson of the Quad-City Times details McCaffery's resume.  His football counterpart Dan Doxsie...well, we can get to Dan Doxsie's wrongheaded, idiotic, uninformed rant later.  Suffice it to say, among the fourth estate, the general tone is guarded optimism, just as it has been for every coach Iowa has hired since the mid-70's and as it should be.  It's a new day.  Greet it with a smile.