We hadn't gotten around to Fran McCaffery yet, which is good; it gives us something to talk about now that he is to be named the next Iowa head coach. What do we know about the man who will lead the Hawkeyes for the (hopefully) foreseeable future? 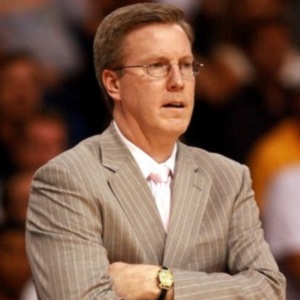 McCaffery is West Philadelphia, born and raised, on the playground is where he spent most of his days. He graduated from Penn in 1982 after three years as a point guard (he spent his freshman year at Wake Forest before transferring), and was nicknamed "White Magic" (yes, THAT'S RACIST KID GIF). He then joined the Penn staff as an assistant for one season. After two subsequent years as an assistant at Lehigh, he was promoted to head coach at the ripe old age of 26. In his third and final season with the Mountain Hawks, McCaffery's team won the Patriot League and made the NCAA tournament, losing a first-round game to Temple.

McCaffery left Lehigh after that season for a spot on Digger Phelps' staff at Notre Dame, staying on after Phelps was replaced by John MacLeod in 1991. He was named head coach at UNC-Greensboro after the 1998-99 season, taking over a team that had gone 7-20 and winning the Southern Conference championship in his second year. It was not all wine, fruits, and scented oils for McCaffery, though; two sub-.500 years dragged down his winning percentage. McCaffery spent 6 years at UNCG, leaving Greensboro with a 90-87 record, one NCAA tournament appearance, and one NIT appearance. He then took the head coaching job at Siena, where his stock took off. During McCaffery's five-year term, Siena won 20 games four times, won the Metro Atlantic regular season title 3 times, won the Metro tournament 3 times, and won its opening NCAA tournament game twice. This season, Siena went 27-7, losing only one in-conference game, and earning a 13 seed. The Saints lost to Purdue in round one of the tournament, their fifth loss to an NCAA tournament team this season (including UNI and Butler).

McCaffery's Siena squads played at a relatively brisk pace, ranking 39th nationally in adjusted tempo rating this season with 70.5 possessions per game. Last year, Siena ranked 16th, though previous years were closer to the middle of the pack. The offense is primarily motion-based, though McCaffery isn't known for any particular system and has adapted to his personnel from year to year. And say goodbye to the three-pointer; McCaffery's teams are consistently ranked near the bottom of Division I in three-point attempts and three-point attempt ratio, and an extremely high 60% of his most recent team's points came on two-point field goals.

McCaffery is also primarily a man-to-man defensive coach. The one consistent statistic throughout McCaffery's time at Siena is "clean" defense, highly efficient and devoid of fouls; Siena ranked first this year in FTA/FGA, measuring the number of free throw attempts allowed per shot; in every year he has coached the Saints, his team has finished in the top 10 in this number. It was this number that drove up Siena's defensive efficiency statistic (#21 nationally on raw data, #54 adjusted).

Recruiting is difficult to measure, as Siena isn't followed by the recruitniks. Unsurprisingly, McCaffery has stuck to Pennsylvania and New York as a recruiting base, and has successfully brought in the sort of "Big East interest but no offers" guys that a mid-major powerhouse is built upon. An SI preseason profile described how McCaffery's wife, Margaret, makes apple cobbler for potential recruits and tells parents how she and Fran will take care of their sons.

Which, I guess, makes this as good a time as any to discuss Margaret McCaffery. She is a former Notre Dame star forward and women's assistant coach, and she isn't afraid to put that knowledge to good use, shall we say. She was kicked out of a 2006 game against Hofstra for criticizing the officials from the stands (Fran was also booted). Last year, after an overtime loss to Loyola, she entered the press room and told a local reporter that the headline should be "We got hosed," then said, "Will Bush is a horrendous official." Some have speculated this is why Fran hasn't been given a top-level job earlier. I, for one, welcome her with open arms. If she's screaming at officials in an empty Carver Hawkeye Arena, we'll all be able to hear it.

There will certainly be criticism. There will be those who criticize his lack of Iowa connections, as if that mattered with Tom Davis and George Raveling. There will be those who criticize his mid-major pedigree, as if that mattered with Lute Olson. There will be those who criticize simply because he's named Fran, or because he's from Pennsylvania, or because he looks like an English Lit professor. But for a program at rock bottom, losing 20 games, playing in an empty arena, still without practice space, Fran McCaffery is a good hire on paper. This is not Kansas, or Texas, or even Iowa circa 1999, or 1986, or 1983. This is a trainwreck to which the coaching names floated by the delusional would not dream of coming, and a trainwreck short of the cash needed to change their minds. Fran McCaffery has resurrected programs in this situation before. On day one, let's just hope he can do it again.