Depending on who you are reading, Iowa has contacted Dayton head coach Brian Gregory about taking over the basketball program, and Gregory turned them down.  Or Gregory told them to wait until his team finishes their run in the NIT.  Or Gary Barta flew to Cincinnati Thursday to interview him.  Or none of this has happened.  In any case, ten days into the coaching search, he's the "hot" name, which says a lot for how the search is going. 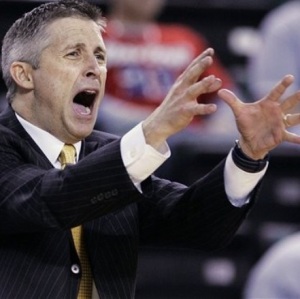 That's not to say Gregory is a bad coach; quite to the contrary, the pedigree and results are there.  Gregory played his college ball at Oakland (Mich.) University after transferring out of Navy.  Immediately after graduating, he caught on as a graduate assistant to Jud Heathcote, staying for 6 years.  He then spent one year as an assistant at Toledo before joining Kevin O'Neill's staff at Northwestern for two seasons.  Gregory finally returned to Michigan State as an assistant to Tom Izzo, spending four years in East Lansing on his second tour of duty before being chosen to replace Oliver Purnell at Dayton.

In the seven seasons since assuming the head spot for the Flyers, Gregory has compiled a 169-92 record, with two NCAA appearances and a pair of NIT's.  He has yet to win a conference championship in the Atlantic 10, however (he did win a division championship in his first season).  His teams have also exhibited a disturbing tendency to flame out down the stretch; the 2007-08 Flyers climbed to #14 in the AP poll in January before a February collapse and sub-.500 conference record dropped them into the NIT.  It could be chalked up as an anomaly, except for the fact that this year's team did almost exactly the same thing, losing 6 of its last 9 and finishing 8-8 in a conference they were expected to win (to be fair, they have regrouped and made a run to the NIT semifinals).  Two may be a coincidence, but should he get the Iowa job, the trend would be proven or disproven on our dime.

Recruiting is less of a concern than virtually every other candidate.  Gregory has focused his efforts on Ohio, Michigan, and Illinois, and the results have been positive.  He has landed a steady string of 3-star types, better than your average A-10 team is expected to score.  He's also shown the ability to play at the highest levels; this year, he picked off 4-star point guard Juwan Staten out of Virginia's Oak Hill Academy.  Of all the potential issues I might have with Gregory, none of them are recruiting-related.

There could also be financial concerns, as Gregory's contract was extended through 2018 after last season's NCAA appearance, mostly to prevent precisely what Iowa may attempt to do.  Dayton is private and has declined to disclose the details of Gregory's agreement, but recent filings indicate he received slightly more than $500k in base pay, with a total compensation package of approximately $750k this year (and that doesn't even count the money he gets for his Just For Men Touch of Gray commercials).  That is, at the high end, a $4M buyout, and is likely at least $2M.  That means a big payout to Dayton on top of the Lickliter buyout and a comparable package to Gregory for taking the job, all for a program admittedly strapped for short-term cash.

And all of this assumes he wants the job, which has not been confirmed and, if one branch of the rumor tree is correct, has actually been proven false.  When Tom Izzo issued his statement in the wake of Lickliter's termination comparing Iowa to Al-Qaeda, many read that as a direct message to his former assistant that Iowa is not the job to take.  Gregory has Big Ten ties, to be sure, but he also grew up in the suburbs of Chicago, where DePaul is promising to throw wads of cash at their next coach.  He is also entrenched at Dayton, with a contract that virtually assures him continued gainful employment for the next five years in a conference that is traditionally strong in basketball and poised to get stronger should the Big East disintegrate.

There are a lot of question marks here, perhaps not as many as the other options at this point, but enough to give any prudent fan pause.  And the upside potential in choosing a coach who is slightly better than average in the Atlantic 10 seems, at first blush, limited.  He wouldn't be a terrible choice, but he isn't going to set the world on fire.