VOTE FOR PAT ANGERER OR THE JET-SKI TERRORISTS WIN

Share All sharing options for: VOTE FOR PAT ANGERER OR THE JET-SKI TERRORISTS WIN

Friends, the 2010 Name of the Year bracket has been released. Needless to say, this is the premier tournament event in the nation. Fuck March Madness*.

While we were disappointed to find out that Lucas O'Rear was cut from the field on account of his pedestrian first name, our feelings were obviously buoyed by when we noticed Pat Angerer had made the cut. So was Angerer a 1-seed? top 4? Top half of the bracket for sure, right? 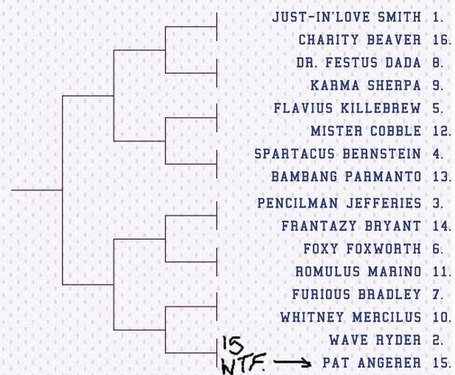 15 seed?! Oh, you pigfucking pigfuckers. Pigfuckerers, as Mr. Angerer would have it. But all hope is not lost, friends!

Voting is not open yet for Angerer, sadly, but you may certainly get started in that brutal Bulltron Region, where the ceremony begins today. Lolita Respectnothing is criminally underseeded at #16, but Nohjay Nimpson might be the best name in the entire bracket. As far as our Final Four goes, X'Zavier Bloodsaw takes the Bulltron with considerable help with EDSBS, Dick Smallberries Jr. coasts through the Sithole Region, Spontaneous Gordon earns his #1 seed in the Dragonwagon Region, and whoever wins the brutal 4-5 between Flavius Killebrew and Spartacus Bernstein (our preferred choice between the two) wins the Chrotchtangle.

What say you, friends? Other than VOTE FOR ANGERER OR DIE, obviously. We cannot let our hero be defeated by some guy who's named after personal watercraft.

*This opinion has nothing to do with Iowa's abysmal, decapitated basketball program. No sir, nothing at all.