At last, football has returned to us.  Sort of.  Granted, it's the bastardized spring version, which is really just light practices with a few scrimmage-y things mixed in... but, hell, it's better than baseball or slitting our wrists thinking about the basketball coaching search, right?  Right.  So here's a refresher course to get you up to speed on the biggest question marks facing the football team this spring. 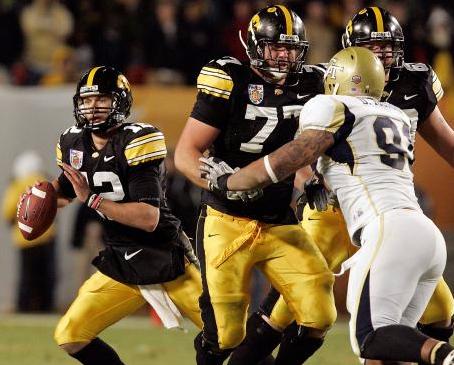 1.  OK, so Riley Reiff's back... what about the rest of the offensive line?
The offensive line situation remains the ice cold water to throw on your 2010 Iowa football boner anytime it gets too out of control.  The only returning upperclassmen is Julian Vandervelde and his performances over the course of his Iowa career have been... rocky, to say the least.  The only other Iowa player in recent memory who's started as many games but still been in danger of losing his job was probably Rafael Eubanks, who actually did lose his starting job in 2008.  The other returning player with significant starting experience is the former naked Panchero's bandit, Riley Reiff, who did a frankly tremendous job filling in at various spots on the line last year and looks poised to be the next great Iowa offensive lineman.  Aside from those two, though, things are wiiiide open.

Josh Koeppel and James Ferentz should vie for the center spot.  There's been some buzz about South Dakota State transfer Woody Orne and our friend from America's hat, Nolan MacMillan, possibly filling spotd on the line.  Adam Gettis (who made an unconvincing start against UNI last year and promptly slid back down the depth chart), Kyle Haganman, and Cody Hundertmark (newly moved over from the defensive line) are other names in the mix.  The actual rotation probably won't be set until August camp (and it wouldn't be too shocking if Ferentz continued to tinker with combinations into the season, no matter how much it drives fans crazy), but we should get a better idea of what the line might look like during spring ball. 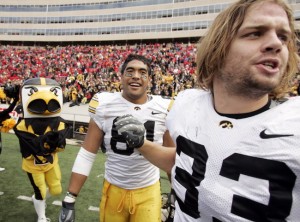 Do we hope Tarpinian gets a spot purely for months of Sunshine jokes?  Probably.

2.  No Angerer, no Edds... big problem?
Much has been made about all of the returning talent on the defensive side of the ball (and Iowa does return eight starters on defense, so it's definitely not time to panic or anything), but there is one gaping hole on that side of the ball: linebacker.  Jeremiha Hunter figures to man the same spot he's held for the past two seasons at weakside linebacker; he's been a steady (if not particularly spectacular) presence there, regularly finishing second to Angerer in tackles.  But what of the other two spots?  We hardly need to remind you how good Edds and Angerer were; Edds was probably the finest linebacker in pass coverage Iowa's had in ages and Angerer was equally adept at stuffing the run and dropping back into pass coverage himself.

The options to replace them seem fairly high on talent, but rather low on experience.  Bruce Davis and Jeff Tarpinian both made their names thus far with punishing special teams hits and a few cameo appearances with the first-team defense (Tarpinian also made a few appearances when Iowa switched to a 3-4 look at times).  Tarpinian struggled against Ohio State in more extended action last fall, but was apparently battling a leg injury.  Davis made a few blistering hits in relief of Angerer against Minnesota last year, but it remains to be seen if his pass coverage skills are up to snuff.  Troy Johnson's another guy who's been biding his time for a while; he finally got a chance to start last year in the aforementioned Minnesota game and promptly tore them to shreds (11 tackles, 1 sack, 1 forced fumble, 1 fumble recovery, and 1 Big Ten Defensive Player of the Week award).  There's also Tyler Nielsen; he's long been groomed to be Edds' replacement and he may have a leg up on Johnson and Nielsen, since they've primarily seen action in relief of Hunter (whose spot is presumably safe).  There's an outside shot that one of the incoming freshmen could work into the mix at LB this summer, but we'll probably still have a good idea of who's replacing Edds and Angerer after spring ball.  Whoever that winds up being will have some big shoes to fill. 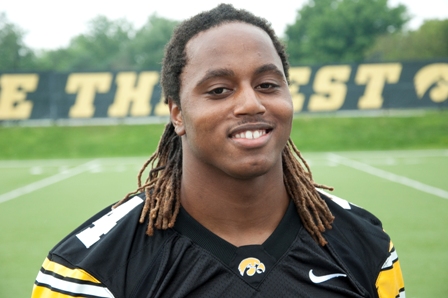 If nothing else, Bernstine would give Clayborn some competition for "best hair"...

3.  Assuming he avoids any more rogue bartenders, Prater has one CB spot, but what about the other one?
On the other hand, the race to fill the cornerback spot opposite Shaun Prater seems like it's probably a one-man job -- asuming said guy can actually stay healthy.  Jordan Bernstine has been tipped to be a starter the last two seasons, only to have injuries in fall camp slow him down (or end his season altogether).  By all accounts, Bernstine is healthy now and should have the edge at replacing Spievey.  No offense to Willie Lowe or Greg Castillo, but they seemed to get picked on a lot last year while Prater was serving his spiked drink-induced suspension.  Micah Hyde turned some heads when he was chosen to fill in for Prater during a few plays in the Orange Bowl, but it's difficult to see him leapfrogging Bernstine unless he's an absolute prodigy at cornerback. 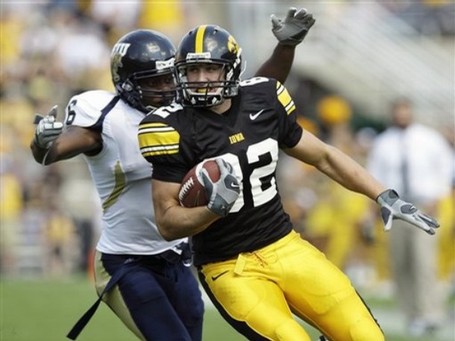 4.  The Tongan Terror is off to get paid; who's replacing him?
Alas, poor TonyMo, we'll miss him and his bubble wrap-covered appendages as he takes his prodigious talents and eggshell-thin bones and ligaments to the next level.  Granted, you could only really count on him for 6-7 games a year, tops, but when he did play, Moeaki was arguably as talented and well-rounded a tight end as Iowa's had under Ferentz.  Senior Allen Reisner is the odds-on favorite to replace him; he's steadily moved up the depth chart the last two seasons and seems likely to take the top spot this year.  He seems as adept at catching the ball as Moeaki and (fortunately) seems not quite as fragile... on the other hand, he doesn't appear to be nearly as dominant a blocker as Moeaki often was, something which will be sorely missed by the rest of the offensive line.  Could Brad Herman steal the top spot at TE if he proves to be a more capable blocker and has at least competent hands?  Maybe?  The Polish Hat will be throwing his stylish head-warmer into the mix in the summer, too, but for now it looks like a two-horse race between Reisner and Herman. 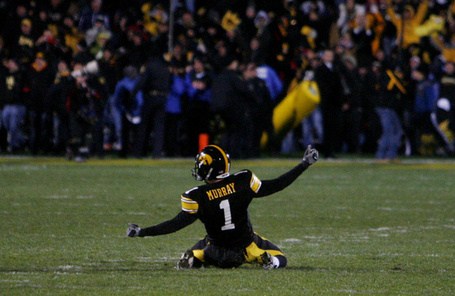 Yeah, this is still pretty awesome.

5.  We talkin' about kickers?  Really?
Kickers?  Really?  Yes, really.  For one thing, Iowa's fortunate enough to be returning starters at quite a few positions this year, so we do have to reach a little.  And, frankly, it's not as if Daniel Murray has exactly turned into the second coming of Nate Kaeding (Iowa-era Nate Kaeding, that is) out there... or even Schlicher the kicker, circa 2004.  He went 19/26 last year and had some costly misses down the stretch in games against just Northwestern and Ohio State.  He'll always be our hero for ripping Penn State fans' hearts out and stomping on it in 2008, but it's not like there isn't room for a little improvement at the kicker spot.  The other option is Trent Mossbrucker who redshirted last year and seemed to suffer a crisis of confidence after Ferentz chose Murray to take the game-winning kick against Penn State in 2008 (see: the two badly missed PATs he had against Purdue the next week).  Assuming Mossbrucker has his head scewed on straight again, he may be the better option from short distances -- he went 13/15 in 2008 before getting yanked at the end of the season.  On the other hand, that still doesn't solve the kicker position's biggest dilemma, which is the lack of a booming leg.  Unless Mossbrucker had a rocket leg grafted on during his downtime last year, field goals over 40 yards could still be an adventure and kickoffs could still fall woefully short of the end zone. 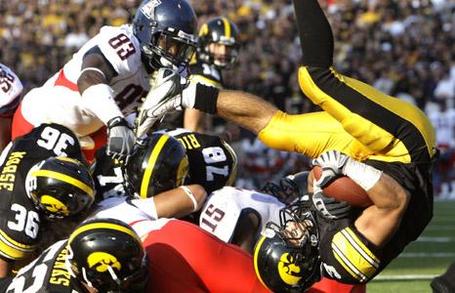 Wegher will have plenty of time to work on his Superman technique this spring...

HONORABLE MENTION: Hey, what about that running back logjam?
Yes, there is one position battle that we notably -- and purposefully -- excluded.  Aside from the offensive line question marks, there may be no bigger question about the 2010 Iowa team than who mans the running back spot.  Or, rather, what the breakdown of carries will be, considering that there appear to be three very good options (Jewel Hampton, Adam Robinson, and Brandon Wegher) and, sadly, only one ball to go around.  We didn't include that in the list above because, frankly, we aren't going to learn a damn thing about the running back rotation in spring ball.  Robinson and Hampton are both reportedly rehabbing injuries (shoulder and knee, repsectively), which means they probably aren't going to do much more than light jogging during practice.  The main options at running back during the spring figure to be Wegher... and everyone's favorite ethnic slur-monikered terrorist-cum-footballer, Paki O'Meara.  Unless Brad "the Cambus" Rogers eats him and takes his spot on the depth chart, anyway.  Either way, we aren't going to learn much about the running back spot this spring.  Check back in August.