As Gary Barta began his end-of-season review of Todd Lickliter and the Iowa basketball program the truth of what the team had become and, more importantly, where it was headed was becoming very clear. Todd Lickliter, an introverted, soft-spoken basketball egghead had, regrettably, accomplished exactly what he set out to do, create a basketball team in his image. Barta saw the final product in Minneapolis and Madison and decided quickly thereafter something must be done to stop this Frankenstein. Barta had two excuses at his fingertips, Lickliter's health and the prospect of yet more player transfers, but the truth of his growing disgust centered on how effortlessly the Hawkeyes were being pushed around the court by teams that were not particularly known for physical basketball. Knowing he would fire Lickliter at season's end, Barta began contemplating a call into Gunnery Sgt. Hartman's agent to see if there might be any chance the gunny would take on the daunting task of rebuilding Iowa basketball.

Gunnery Sgt. Hartman hails from Emporia, Kansas by birth but in reality Parris Island is his motherland. He's never played a single game of basketball (organized or otherwise) or coached any sport. The Gunny, as he is often called, has however spent two years as a drill instructor at the Marine Corps Recruit Depot in San Diego, California, and Parris Island, South Carolina from 1965 to 1967 and it was during these two professional stops that he turned out one tough son of a bitch after another, most of whom would go on to kick ass and take names, and collect dog tags. In 1968, Hartman went to Vietnam where he truly distinguished himself as a leader of men, working with the Marine Wing Support Group 17. Iowa would not be the first program to lick their chops at the notion of Hartman coming in and changing the culture of their eroding program pride.

At first blush, Iowa fans might be dumbstruck at the notion of Gunnery Sgt. Hartman becoming head coach at Iowa after having only served as a drill instructor for his entire professional life. But first impressions are rarely correct, and the comparisons between Hartman and Lickliter are the ideal way to assess this candidacy. Gunnery Sgt. Hartman is self-sufficient. While Lickliter whined about having a strength coach, Hartman would tackle the task of building strength and character himself and he would do it the old fashioned way: push-ups in the rain after a 20-mile run with 40-pound backpacks in the hills. Hartman doesn't run a set system. Whereas Lickliter employed The Butler Way, Hartman relies on ambushes and raids to throw off the competition. You can be sure he will teach the players many adapted military tactics designed to combat whatever the opposing teams might throw at them.

Player communication will be quite different under Hartman, as will his media presence. An example of the latter could best be illustrated in examining how Todd Lickliter handled a Scott Dochterman question after the February 16 Michigan game. In that game freshman post player Brennan Cougill received his first DNP-CD despite the Hawkeyes running low on big men. When center Jarryd Cole fouled out, Cougill remained stapled to the bench, leaving sophomore Andrew Brommer as the only available post player. Brommer played 14 minutes after sitting out losses to Ohio State and Illinois earlier in the month. When Dochterman asked Lickliter if Cougill was hurt, the diffident coach responded, "No, maybe his feelings. He’s fine. No problems." You can bet Hartman would have handled this whole mess differently. First, Hartman will introduce the stanch rule that in all games the Hawkeyes play with "No man left behind." One could be sure that Cougill would never be the left on the bench under Hartman, if a player is good enough to be on the team they hit the battlefield. Period. Morevoer, if there were any messages to be sent to the young man, they would be sent directly and not via exclusion from the team. It would probably go something like this:

Gunnery Sgt. Hartman: Are you quitting on me Cougill? Well, are you? Then quit, you slimy fucking walrus-looking piece of shit! Get the fuck off of my court! Get the fuck off of my precious hardwood! Now! MOVE IT! Or I’m going to rip your balls off, so you cannot contaminate the rest of the world! Where the fuck are you going staypuff? Get back here. I will motivate you, Lard Ass, if it short-dicks every cannibal in the Congo! 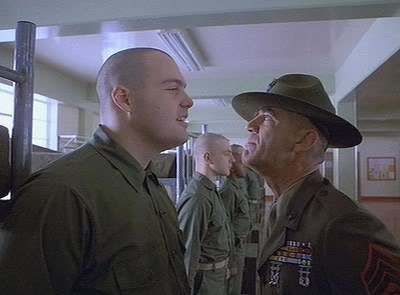 Where Hartman will look very different from Lickliter is in recruiting.  Lickliter’s roster is the typical array of some of the best that Iowa has to offer, with a mix of players from Illinois, Missouri and Minnesota. Additionally, Lickliter scored four 3-star players in his latest recruiting haul. Hartman will more than likely ignore any regional approach to recruiting, or any and all traditional recruiting whatsoever. Instead Hartman will rely on volunteers for his potential recruits. They will all be personally screened by Hartman and his staff for physical standards and fitness and adequate education (a high school diploma or equivalent, such as a GED). Then players will receive a buzz cut and hand their lives, lock, stock and barrel over to Hartman. There will be no real return to civilian life either. Once they sign on, the recruits will be forever changed—even if they do not make the team. You can be sure that Hartman will run a clean program as well. He will only allow volunteers with a lack of significant civil convictions, lack of significant drug use, and other qualifiers. Once recruits are screened Hartman will administer something along the lines of the Wonderlic Test used at the NFL Combine or the Armed Services Vocational Aptitude Battery to determine qualifications for a specific position. Those players that qualify and successfully process will participate in the summer camp with the goal to make it to preseason training. IF there are any reservations as to the Gunny's value, camp will put those to rest. That is where he shines.

To secure the Gunny's services there should be no financial issues whatsoever. Hartman earned a little over $42,350 a year in salary with the Marines. Iowa has the money to make an exceedingly generous offer to Hartman but if he accepts the job it will not be for the money. Hartman lives a Spartan lifestyle.

So the question becomes whether concerns over recruiting style, lack of coaching and playing experience, and the inevitable "What?!?!" response with which the fan base is likely to respond, will be enough to steer Barta away in the end. Only time will tell. But after three season of soft, passive, gutless, sissified, mamby pamby basketball the typical Hawkeye fan just might be ready for some radical change. We know that what sell tickets is winning but one could argue that the fan base would tolerate a little more losing if the program were to impart an aura of fear and dread in the opposition. The fan base wants a winner, for sure, but they also desperately want to restore Hawkeye pride and maybe, just maybe that alone would be enough to put some butts in the seats. With the talent currently on the roster under Hartman’s tutelage, one would think that Northwestern and the purist Indiana teams, to name but a few, just might not show up in Iowa City, and those forfeits would begin to add up over time.