The unsexy pick just got a whole lot sexier.  Ladies and gentlemen, the pride of Iowa, the vanquisher of the Kansas Jayhawks, America's sweetheart: Northern Iowa's Ben Jacobson. 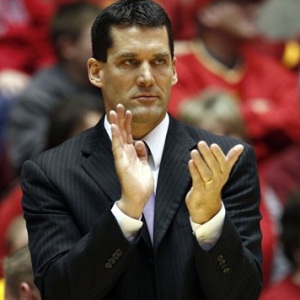 Jacobson hails from Mayville, ND, and played point guard for North Dakota in the early 90's.  He graduated the school's all-time assist leader. Following graduation, he stayed on as a graduate assistant, then full-time assistant coach, with the Fighting Sioux until 2000, then latched on with Greg McDermott at North Dakota State as assistant coach and recruiting coordinator.  He moved to Northern Iowa with McDermott the next year (2001), and remained McDermott's top assistant until assuming the head coaching position when McDermott moved to Ames.

Jacobson has presided over the greatest extended run in UNI history, leading the program through the last four of six consecutive 18-win seasons.  He finished his first two years with an even .500 conference record in the true heyday of Missouri Valley Conference basketball.  UNI then surprisingly won the conference in 2008-09 with a team picked to finish close to the bottom of the Mo Valley, going 14-4 in the conference after an auspicious 9-7 start in non-conference play and winning the conference tournament.  There were no surprises this year, as UNI led the MVC virtually wire-to-wire, posting a 28-4 record to date with a 15-3 mark in the conference and a season sweep of Iowa, Iowa State, and Drake (not exactly the most impressive season to complete that feat, but still).  And then came the NCAA tournament.  And then came Kansas.  And the rest is soon-to-be-made history.

At first blush, many Iowa fans are less than enthused at the prospect of Jacobson as head coach at Iowa; UNI runs a slow-down system, and Jacobson isn't the most exciting coach to watch work.  But first impressions are rarely correct, and the comparisons between Jacobson and Lickliter end with the three-syllable last names.  Ben Jacobson is a basketball wonk's wet dream.  He doesn't run a system, so much as an incredible number of sets: UNI players are required to learn more than 100 set plays without the benefit of a playbook, and games are scripted much like a football coordinator would, exploiting intentional patterns in play to expose defensive tendencies and overpursuit.  His players learn tempo-free stats, and are taught the benefits of offensive and defensive efficiency (in an interview earlier this year, Adam Koch told a reporter that UNI was 21-1 when their defensive efficiency was under 1.00; the reporter was naturally dumbfounded).  While the virtues of the Jacobson and Lickliter systems are the same, the methods of getting there are entirely different.

Where Jacobson could run into trouble is recruiting.  Jacobson's roster is the typical Missouri Valley hodgepodge of Iowa kids ignored by UI and ISU, with a mix of players from Wisconsin and Minnesota.  Recently, Jacobson has made inroads into St. Louis, where the Missouri Valley is headquartered and plays its tournament, playing off the cache of its recent conference success, but the results have been less-than-stellar; none of his St. Louis targets, let alone recruits, have received more than 1 star from Scout.  The highest-ranked player in his incoming 2010 class is Greg McDermott's son, who didn't get an offer from dad.  That's a concern.

There is no financial issue whatsoever.  Jacobson earns just $150,000 per season in base salary at UNI on a contract that runs through 2012 and, while I haven't seen a buyout figure, it can't be more than the cost of a new automobile.  Throw in the fact that 5 players are graduating, and the timing could not be better for Jacobson to make a move up.  Unlike UNI, Iowa has the money to make Jacobson an offer he can't refuse; that is, unless someone else does it first.

So the question becomes whether the concerns over recruiting, the pall cast by Greg McDermott's tragic turn in Ames, and the general "meh" factor of begrudgingly accepting a coach not just from a mid-major program but the mid-major program 60 miles up the road that most Iowa fans follow and treat like a kid brother, solves the problem.  Kansas win or no, a Ben Jacobson announcement isn't going to set off a rush to the ticket windows, but, to be fair, there are remarkably few coaches in play that would (I count exactly one under serious consideration).  What will sell tickets is winning; with the talent currently on the roster in Iowa City under his tutelage, I get the strange feeling that could come sooner rather than later.  But it might take a little patience; given this fan base's hunger for success, that might be the one thing lacking.