The rumormongering and speculation continue with what I feel is the most inexplicable member of this list: Providence's Keno Davis, who would not even be on this list if it weren't for his last name. 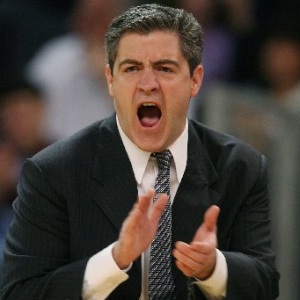 We all know the story: Keno Davis is the son of Dr. Tom Davis, who was forced out in 1999 and, in the subsequent decade, had his reputation completely resurrected as Steve Alford failed to even meet Davis' standards and Todd Lickliter imploded.  Dr. Tom eventually took over at Drake, where he coached four middling seasons before retiring after the 2006-07 campaign.  Drake handed the keys to this Ford Taurus of a program to Davis' assistant and son, Keno.  And Davis somehow put in a new transmission and turned it into a Ferrari, going 28-5, winning the Missouri Valley, garnering a 5-seed in the NCAA tournament, and winning AP coach of the year.  His inexperience didn't scare Providence, who brought him to the Big East with a 7-year, $7M contract.

Even when taking into account that Providence is a Big East black hole (they haven't been past the first round of the tournament since God Shamgod was playing the point, and recruiting to Providence is difficult), Keno's first two years with the Friars have been thoroughly mediocre.  Providence's record improved by 3 games in his first season, though the team was loaded with seniors.  This year, Providence lost its last 11 games, stumbling to a 12-19 mark with just 4 wins in 19 Big East games.  Keno is now 2 games under .500 in his time at Providence, with a 15-24 mark in the conference regular season and tournament.

Stylistically, Keno would be a complete 180: His teams have all been high-scoring press-heavy outfits.  That works well when the press is effective, but not so much when it's not.  Last year, it most certainly was not; Providence gave up 82 points per game, and a staggering 90 points per game in the 11 consecutive defeats that ended the season. Recruiting hasn't been much of an issue; Davis' classes have generally been highly regarded, at least by Providence standards.  There is some concern, though, that a program in the northeast is having to draw talent from Texas and Michigan.   Also, it should be noted that a Keno Davis candidacy may be dead on arrival: He's already telling local media and incoming recruits that he has no designs on the Iowa opening and is committed to making it work at Providence.  Financial problems are moot: Iowa could easily surpass his current $1M per year pay, and his contract oddly contains no buyout on either side; Davis can leave or be fired at any time with virtually no repercussions.

Why should we say no to Keno Davis?  Unlike the other top-tier candidates, there is absolutely no track record of power conference success with Davis.  Unlike the other mid-card possibilities, there is not as much upside potential.  What we have is a system coach with one miracle season at a mid-major where a senior-laden team got a 5 seed and the coach was named national coach of the year, followed by a couple years of sub-.500 performance with the record trending downward.  Not to be flippant, but we just fired that guy.  He would be a feel-good story, a chance at redemption for all the fans who sat quietly indifferent (or vocally in favor) while Bob Bowlsby forced out the winningest coach in the program's history because he didn't win enough.  And if your goal in finding a new coach is to right old wrongs, to relitigate the Tom Davis ouster, then go ahead and support Keno.  But if your goal is to win games and sell tickets, there are sure to be better options.