We are now one week into the Iowa basketball coaching search, and we haven't really learned anything; say what you will about some of Bloodpunch's deficiencies, but the man knows message control.  To date, the only word on the search released by the athletic department was Friday's press statement naming the search committee (no surprises there; four high-level athletics administrators and former Iowa guard/current radio guy Bobby Hansen).  Barta reportedly spent the weekend in Omaha for the NCAA wrestling tournament and Palo Alto for the women's game.  It's not to say that nothing was happening during that time -- you don't hire a search firm for nothing -- but the high-level meetings and final phone calls don't take place from northern California.  We've still got a long way to go.  The delay isn't surprising: In 2007, Steve Alford resigned on March 21 (Happy Anniversary, Steve!) and Todd Lickliter wasn't announced as the new coach until April 2. 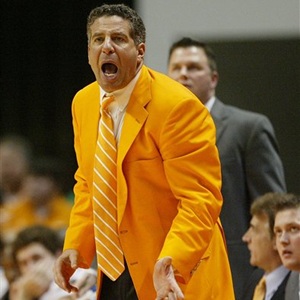 Just like three years ago, the Iowa job is Pearl's if he wants it.  What remains to be seen (or what might have already been seen, if the rumors are true) is whether Iowa can lure Pearl away from Tennessee.  Our sense is that it is highly unlikely.

Pearl is the first disciple of former Iowa coach Tom Davis, serving first as a manager during Davis' tenure at Boston College, then following the good doctor west to act as an assistant at Stanford.  He finally joined Davis in Iowa City in 1986, staying until 1992, and driving Illinois crazy with the Deon Thomas incident; when Pearl lost recruit Deon Thomas to Illinois, Pearl contacted Thomas and recorded the phone call as Thomas admitted to taking gifts from Illinois assistants.  Illinois fans are still angry about this, and that makes me happy.

Pearl eventually left to become head coach at Division II Southern Indiana, where he was wildly successful, winning the 1995 national championship, finishing as a runner-up in 1994, and going 231-46 over nine seasons.  He left USI for Wisconsin-Milwaukee in 2001, making the NCAA tournament twice in four seasons and making a sweet sixteen run in 2005.  Tennessee came calling.  Pearl listened.  The rest we know: A moribund program playing third fiddle in Knoxville, TN has been to the NCAA's five times, qualifying for its third sweet sixteen in those five years yesterday (by comparison, UT had reached 2 sweet sixteens in its pre-Pearl history) and setting home attendance records along the way.

The timing has never been right to bring Pearl to Iowa: When Davis was let go in 1999, Pearl was still coaching in Division II (and probably not enthused by the possibility of taking over a program that screwed his longtime mentor).  When Pearl was ready for a move up after his 2005 season at Wisconsin-Milwaukee, Iowa had just finished 21-12 and made the tournament; there was no displacing Alford.  When Steve did his best Don Quixote impersonation three years ago, Pearl was just getting established at Tennessee and politely declined Iowa's interview request.

It's difficult to imagine a scenario where Pearl would be interested this time, as well.  He has paid dividends for Tennessee athletics, and they have more than returned the favor.  He's reportedly earning $2.3M next season, with full job security, and is arguably already the best coach in program history.  There are rumored personal issues -- a messy divorce, frustration at being the third-biggest show in town behind both football and women's hoops, the presence of John Calipari on his northern border -- that could tip the scales slightly, but those things feel more like excuses by a fan base desperate for the medicine Bruce Pearl could provide.

The painful truth is that Iowa basketball, in its current incarnation, is not a step up from Tennessee.  Attendance has been lousy, the recruiting base needs rebuilt (one of Pearl's strengths, to be fair; he was always good at getting Chicago kids), and the current players need a reason to stay.  Furthermore, Iowa athletics is profitable in general, but Iowa basketball itself has to turn a profit; with $800,000 per year being paid to Lickliter, $2.5M needed for a potential buyout, and more than $3M per year to lure Pearl, that will be difficult (to say nothing of the fact that Ferentz will immediately demand, and deserve, more as Iowa athletics' real breadwinner).  The timing is wrong.  The finances are wrong.  I don't think this can happen.