Hey, You Guys! What About Us? Iowa Women's Hoopsters Get 8-Seed, Game Against C. Vivian Stringer

Share All sharing options for: Hey, You Guys! What About Us? Iowa Women's Hoopsters Get 8-Seed, Game Against C. Vivian Stringer 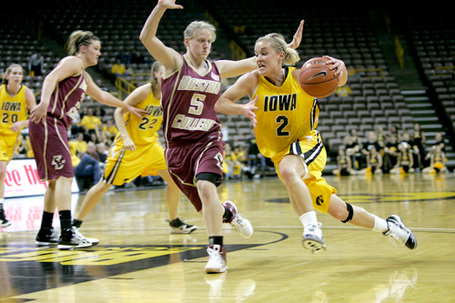 At least the scant few fans at Iowa women's games got to see wins, unlike the masochists at the men's games.

We take a brief break from our OMG BLOODPUNCH ASSASSINATED* LICKLITER coverage to tip our hats to the Iowa women's basketball team -- you know, the one that actually wins games more than once a lunar cycle -- who, as expected, got into the NCAA Tournament as an at-large team this evening.  They're an 8-seed in in the Sacramento region.  Good news: They're in the tourney!  UConn's NOT the 1-seed in their region!  Not-as-good news: Their opponent is Rutgers, coached by former Iowa legend C. Vivian Stringer.  Should they get by the Fightin' Stringers, they'd likely face 1-seed Stanford... on Stanford's home court.  Such is life in the women's tourney, though.
And to add insult to the injury of their NCAA tourney selection getting completely overshadowed by the Lickliter drama, their game against Rutgers is on Saturday at 8:16 PM EST.  Which is only the same time that the wrestling team will be going for their 23rd national championship.  And, oh yeah, all those men's NCAA tourney games, too.  But congratulations to the ladies all the same -- they overcame significant injury issues (Iowa women's basketball player may be the only position on campus more prone to injuries to the Always Crumbling Ligament than Iowa running back) to finish tied for third  in the league in the regular season and nearly overcame horrendous officiating in the conference tournament title game to win that**.  Nice work, ladies, and good luck on Saturday.

* -- Have you seen Lickliter since this all went down?  Hmm?
** -- Yes, fine, there was some self-inflicted chokejobbery in that loss, too.